Now, after years in bankruptcy proceedings, the property located at 1011 North Beverly Drive is set to go to auction. Court documents show there’s an accepted offer in hand for $47 million. But that will be subject to an overbid when the mansion actually goes on the block on September 14. 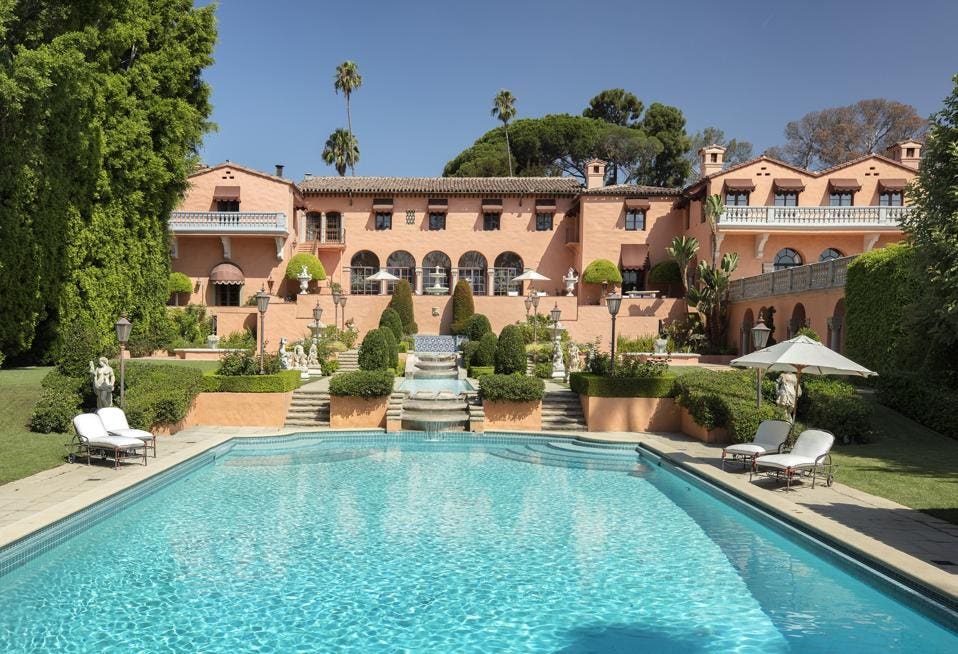 For parties looking to top the $47-million offer, competing bids must start at $1 million over and are subject to proof of funds and a written offer, according to listing agent Gary Gold of Hilton & Hyland. “Bids are due by September 10, then it goes to the court for confirmation,” Gold adds.

The 3.5-acre compound has bounced around the real estate market for almost 15 years. Attorney-investor Leonard M. Ross bought the spread more than four decades ago and has marketed it for as much as $195 million, when it included an additional house and acreage. 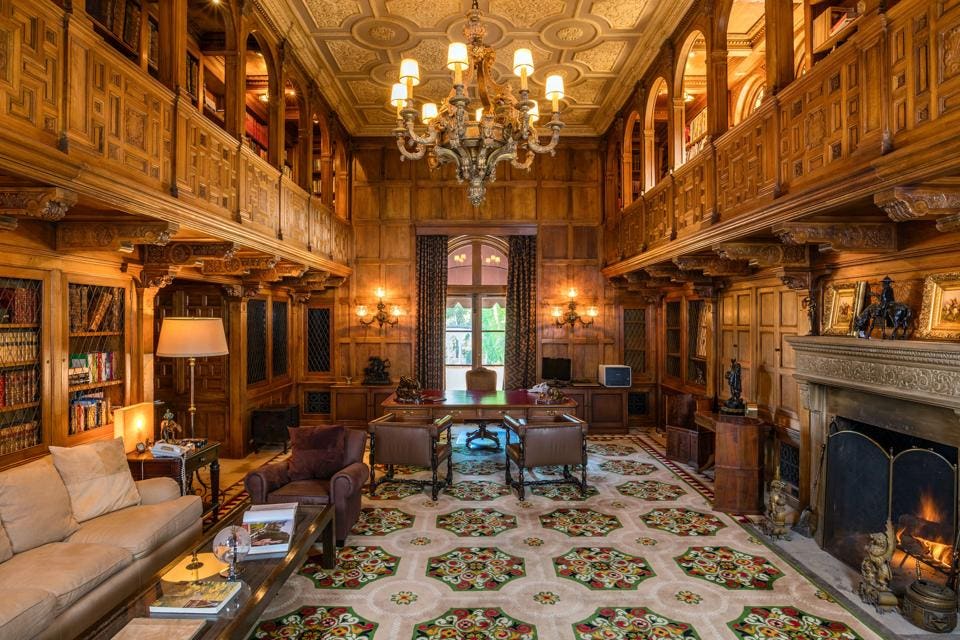 At the time, Hilton & Hyland president and co-founder Jeffrey Hyland told The Los Angeles Times that the price was unprecedented. “It may be the most expensive lease in the country.”

More recently, Gold had the listing at an asking price of $69.95 million. 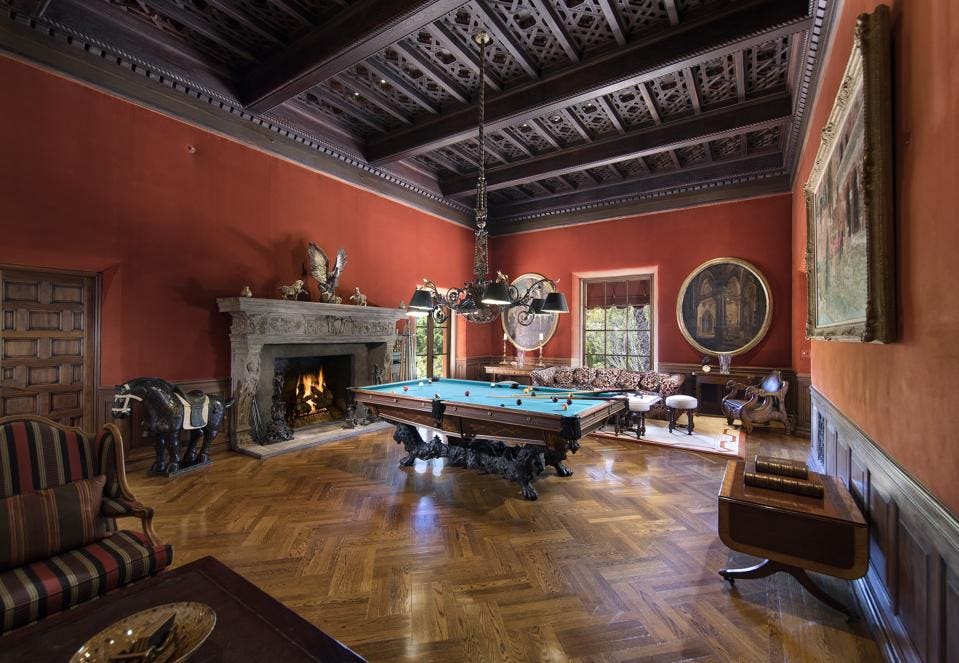 The truth is, it’s nearly impossible to put a price on this much cultural history. The 29,000-square-foot mansion was built by a local banker, Milton Getz, in 1926. Hearst wiled away his days there in the company of actress Marion Davies. John and Jackie Kennedy honeymooned there – long before he became U.S. President.

And the Gordon Kaufmann-designed mansion is not unknown to the American public. It’s been a filming for location for “The Godfather,” “The Bodyguard” and Beyoncé’s “Black Is King.”

“The combination of the huge lot, the huge house and the provenance—William Randolph Hearst lived there and JFK had part of his honeymoon there—makes this a very rare offering,” Gold says. 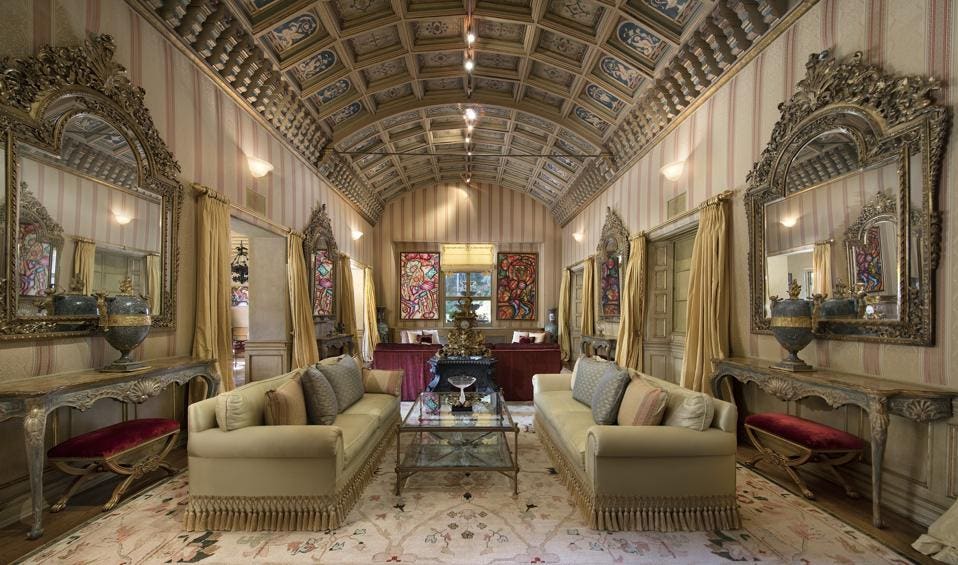 The estate itself is star-worthy. A long private driveway leads up from the gate house to a motor court and fountain at the front of the dwelling.

Once inside, visitors are greeted with intricately carved ceilings, paneled walls and a 50-foot entry hall with loggia. The sedate living room features 22-foot-high arched, hand-painted ceilings. The two-story library is wrapped in hand-carved woodwork. Thick, custom windows lend a hushed tone to the room.

The billiard room retains its original herringbone parquet floors. There are eight bedrooms and 15 bathrooms. 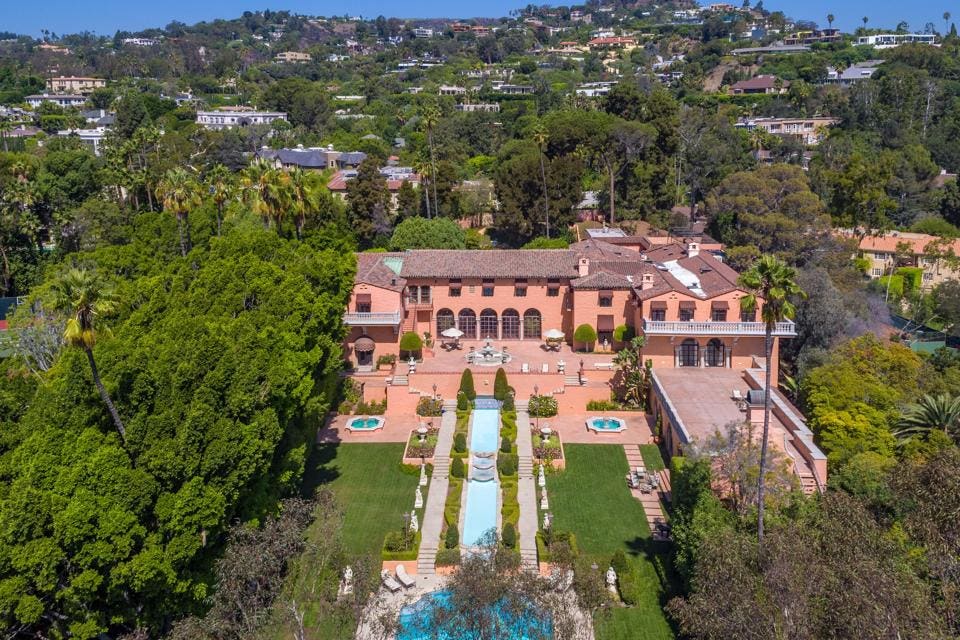 An overhead view of the Hearst Estate in Beverly Hills. (Hilton & Hyland)

At the back of the house a series of cascading waterfalls lead to the three pools and a column-flanked pool house.

As for the pending sale, Gold believes that whoever buys will be getting a great opportunity, particularly if they have the patience and vision to carry out a restoration and renovation of the estate. “You can’t build a house like this in Beverly Hills today. When someone buys this and then redoes it, you’re going to have a house worth well over $100 million.”