Denver’s Union Station: A Neighborhood On The Fast Track

The story of Denver’s Union Station neighborhood has always been indivisible from its namesake — the landmark railroad terminal that has faced a fair share of trials and triumphs in its journey to the present.

Opened in 1881, Union Station has been a veritable phoenix, rising time and time again from the ashes — quite literally. In 1894, the building was partially destroyed in a fire. In the following decades, with the increasing domination of air travel, Union Station and its surrounding area suffered but continued to chug along. 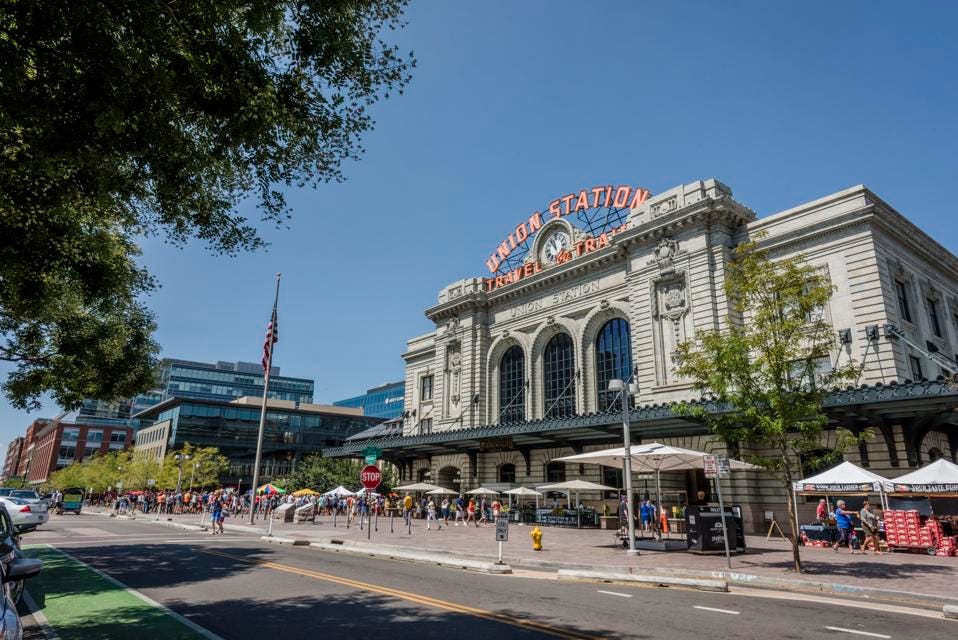 Today, Denver’s Union Station is a social with restaurants and an upscale hotel. (Armando Martinez)

Things began to change in 2010 when the Union Station Revitalization Project was announced. Within four years, the station reopened, fitted with restaurants and an upscale hotel, and 122 of new commuter rail lines and 18 miles of rapid bus transit spanning out from its central, downtown location.

Now, local real estate agents say the neighborhood is thriving. New restaurants, bars, and retail have transformed this once rail yard into a vibrant downtown and one of Denver’s most sought-after living locations. 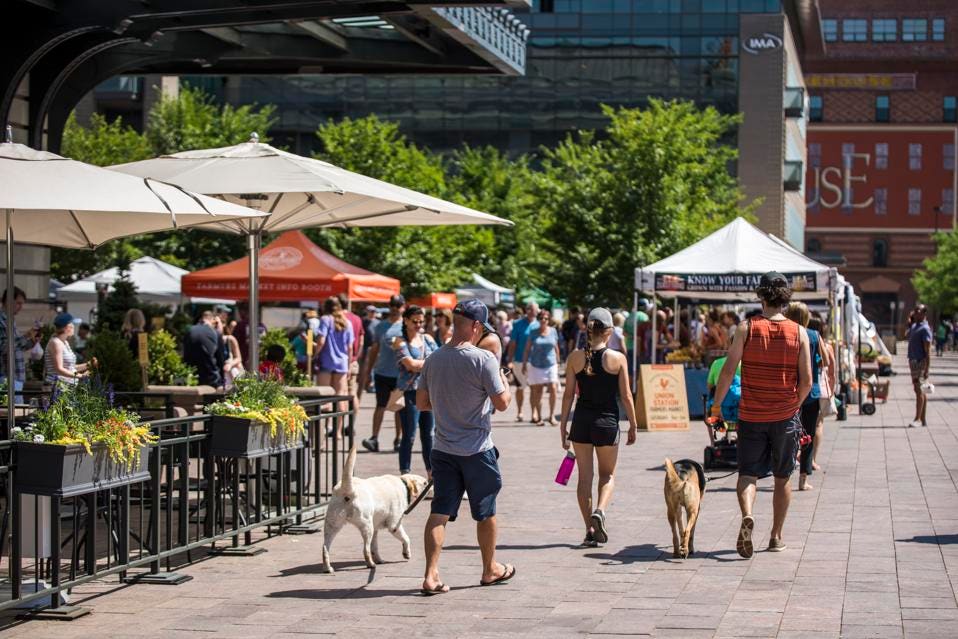 “Union Station is really the first true urban opportunity in Denver where you can live without a car,” said Brad Arnold, executive vice president and managing broker for Slifer Smith & Frampton Real Estate. “There’s the citywide transit, but right in the neighborhood, there’s also restaurants, bars, Whole Foods, the Center for Performing Arts — all a five-ten minute walk.”

Plans for developing the neighborhood involved building over 2,000 new residential units, including constructing brand-new condominium buildings — such as the Coloradan and the Glass House — fitted with modern amenities. 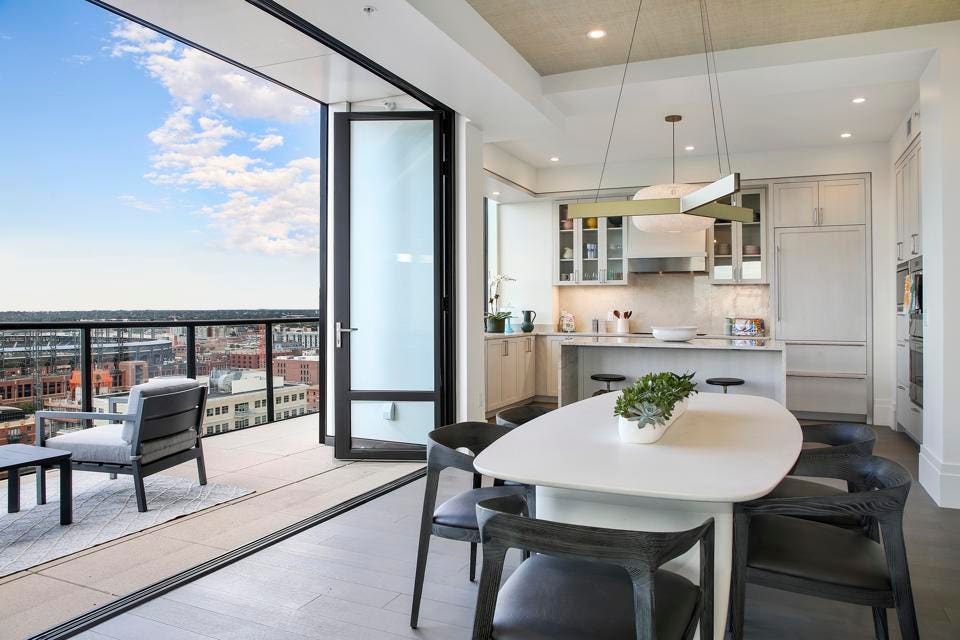 Residences at the Coloradan feature a contemporary design aesthetic and a range of modern amenities. (Denver Image Photography)

Completed in 2019, the Coloradan boasts a club-lounge and pool-deck on the 18th floor, a community library, a garden and 24-hour concierge services. Like housing in the rest of the neighborhood, perhaps the best amenity is the proximity to Union Station — a mere four-minute walk away.

Architecture seen throughout the neighborhood is often contemporary and indicative of Union Station’s downtown location. Tall, minimalistic glass and steel buildings now define the area. Industrial flourishes such as concrete supports, black metals and exposed brickwork are often incorporated and serve as a nod to Union Station’s history. 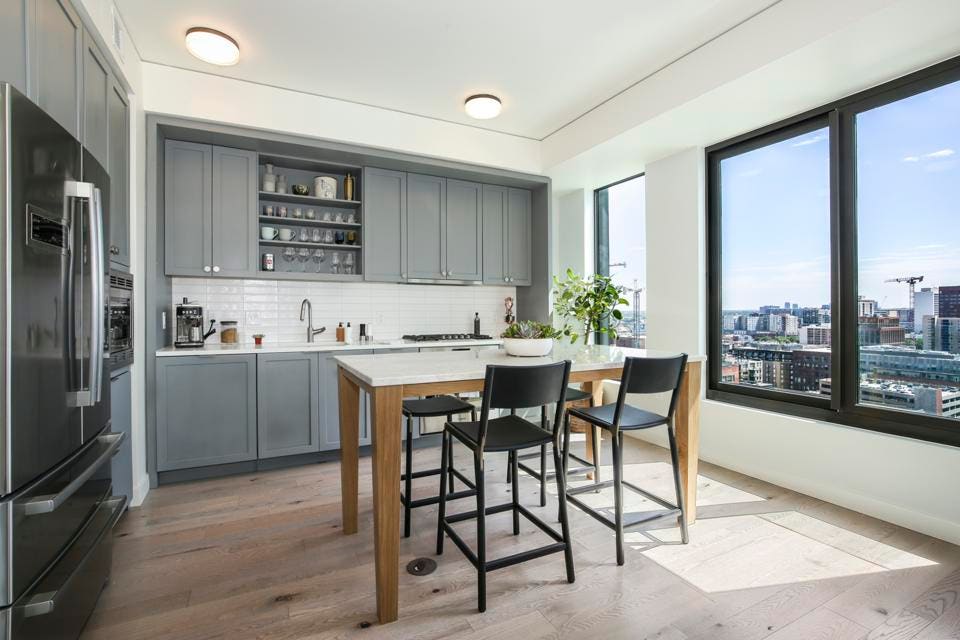 Large picture windows bring views of the Downtown Denver skyline inside this model unit at the Coloradan. (Denver Image Photography)

Denver is in something of an enigmatic real estate boom. As of September, the average home price in Denver was at an all-time high—$606,300, according to the Metro Association of Realtors.

As one of Denver’s premier neighborhoods, Union Station is above that average—the median price being $702,499 in 2020. For that price, buyers can find one or two-bedroom residences in condominium high-rises or smaller loft-style condos in more historic buildings. 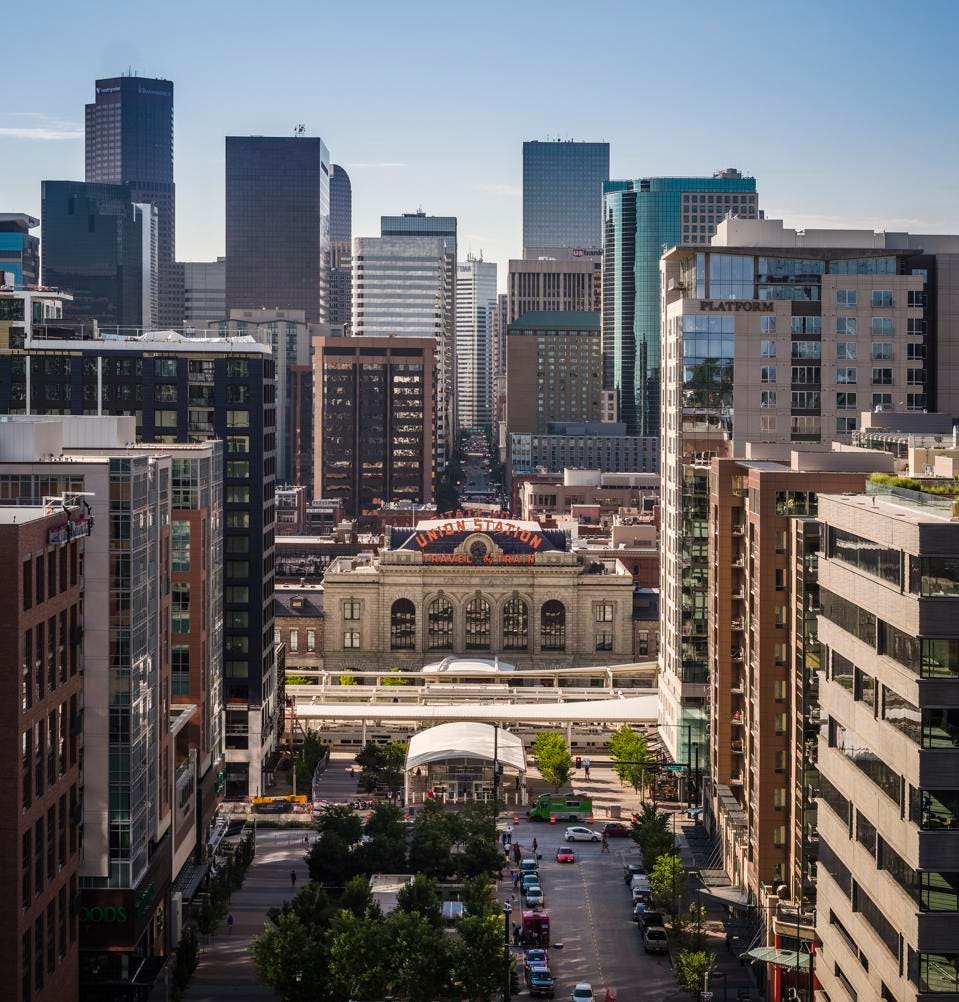 Higher price points get you luxury penthouses in the newest buildings in Union Station. Those able to spend top dollar are rewarded with enviable views of the Denver cityscape and the iconic peaks of the Front Range of the Rocky Mountains.

“When the station reopened, the neighborhood became more hustling and bustling with people,” said Arnold. “It feels very European with all the travelers, working people, young people hanging out, shoppers, people going to bars and restaurants.”

Located within Union Station are some of Denver’s most iconic landmarks like the Museum of Contemporary Art or Larimer Square, a historic shopping district with eclectic shop selections that range from dog boutiques to hat artisans. 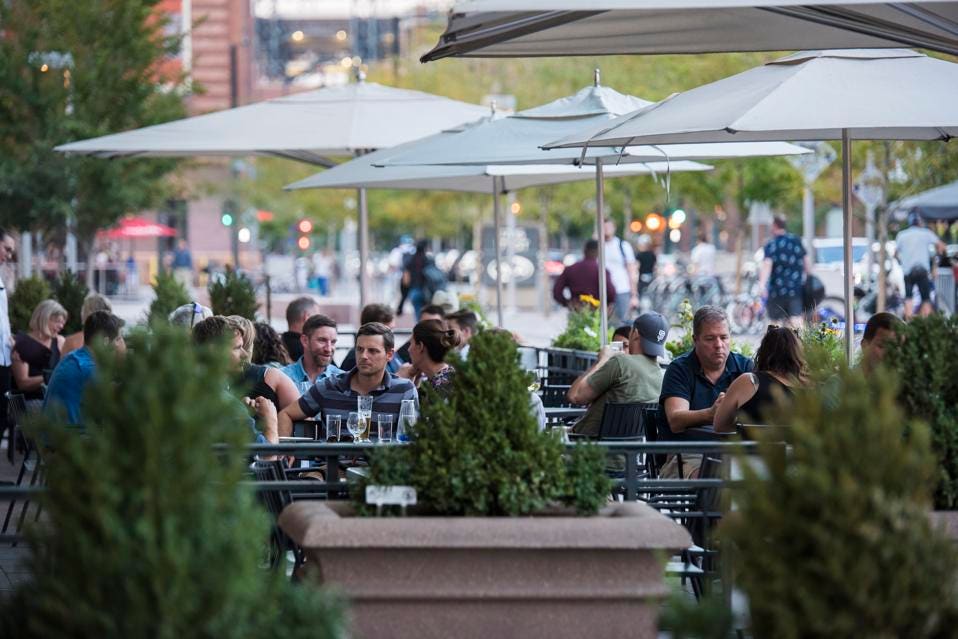 Shops and eateries such as the Terminal Bar have made Union Station a social hub. (Armando Martinez)

Then there is, of course, Union Station itself, which is home to some of the area’s best bars and restaurants, like Terminal Bar, an upscale gastropub that offers 30 Colorado crafted draught beers.

While no schools are located directly in Union Station, students are still served by Denver Public Schools directly to the south of the area — Greenlee Elementary School, Grant Middle School, and West High School. 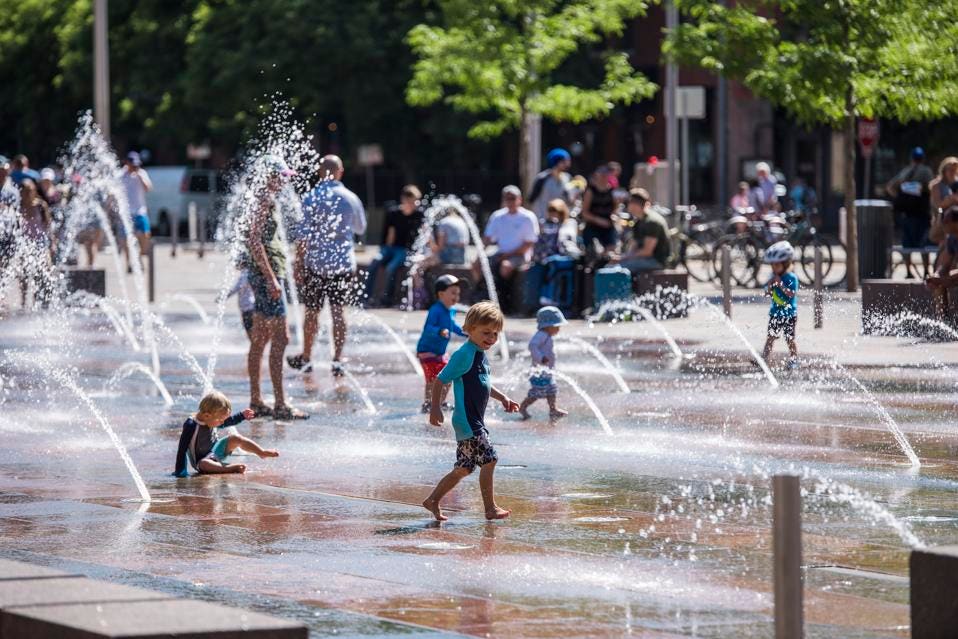 Children play in the fountain at Union Station. (Armando Martinez)

At Grant Middle School, 46% of students met or exceeded standards for the Colorado Measures of Academic Success (CMAS). The statewide average was also 46%. 33% of students were proficients in science for CMAS compared to the state average of 31%.

Having Denver’s central transportation hub within its borders means residents of the Union Station neighborhood can find access to just about any corner of the city and beyond via the RTD Bus & Rail system. 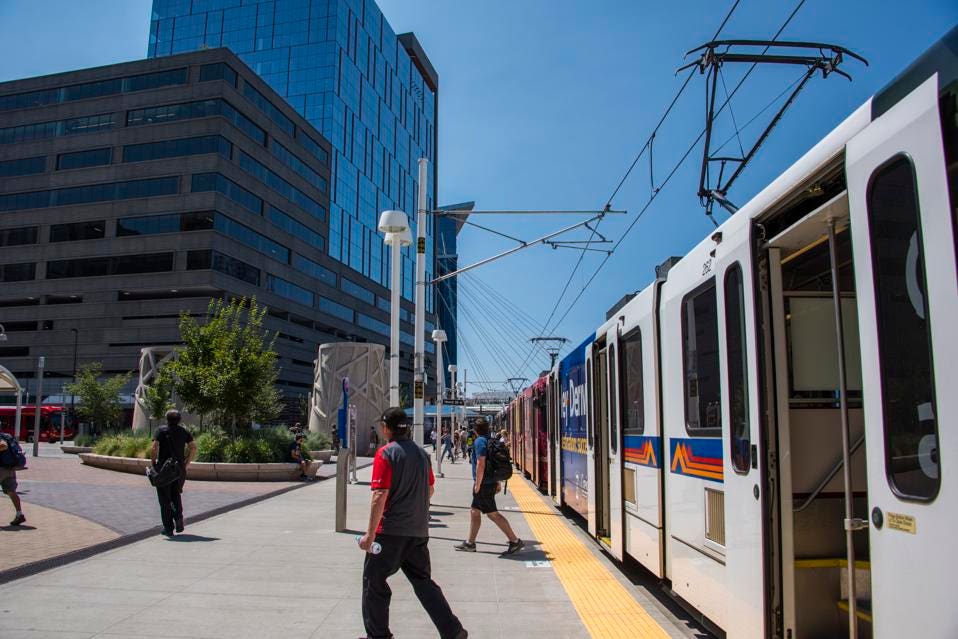 Some 122 miles of commuter rail lines and 18 miles of rapid bus transit are connected to the Union Station terminal. (Armando Martinez)

Denver International airport is a quick 40-minute train ride east. To the west, in less than an hour, the FF1 line puts you in Boulder. Further west (about 70 miles from Union Station) are Colorado’s finest resort towns, such as Breckenridge and Vail.

If trains aren’t your thing and you’re looking for something walkable, the Denver Central Market is only a mile away, and continuing northeast gets you to the River North Art District.