Fairbanks Ranch carries a certain cachet – and it should. The exclusive Southern California community takes its name from swashbuckling silent film star Douglas Fairbanks, who carved a place in 1920s movie history playing such characters as Zorro and Robin Hood. The athletic actor once owned more than 3,000 acres of land in the San Diego County locale.

And the gated neighborhood lives up to its name with such amenities as an equestrian facility, lakes, parklike grounds and walking paths. Fairbanks would be quite at home on the links at the Fairbanks Ranch Country Club or playing tennis on the lighted courts. 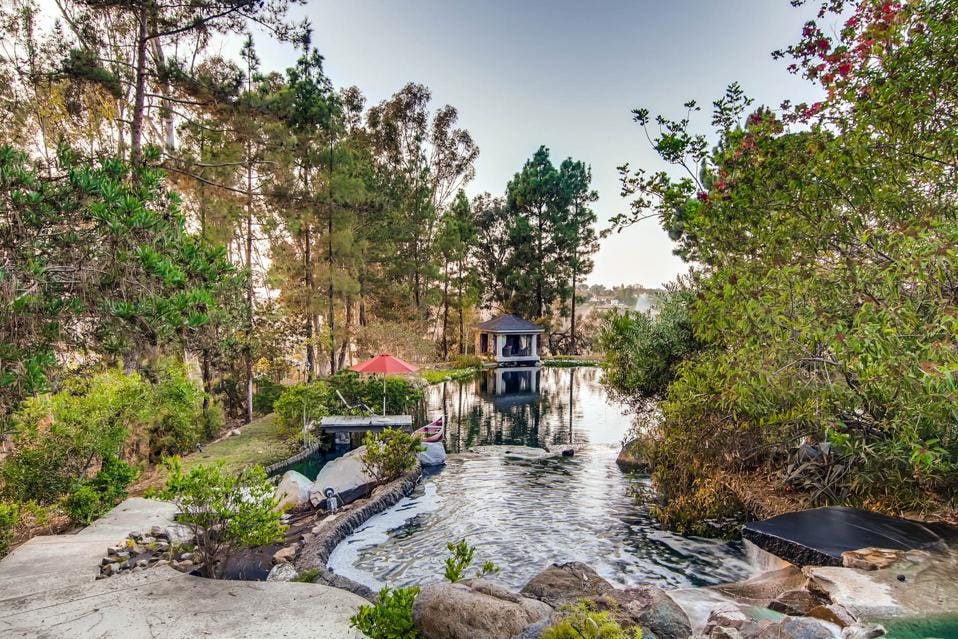 The 10 acres of grounds include a lake fed by a boulder-strewn waterfall. (WILLIS ALLEN REAL ESTATE)

This estate set above the San Dieguito River takes in mountain, sunset and valley views. Spread across the nearly 10-acre grounds are sprawling lawns and paved pathways leading to a private waterfall-fed lake with a gazebo.

A circular driveway with two electronic gates accesses the property. The home itself is reached by a stone bridge walkway set over water. A tall arched doorway opens to the multistory entry. 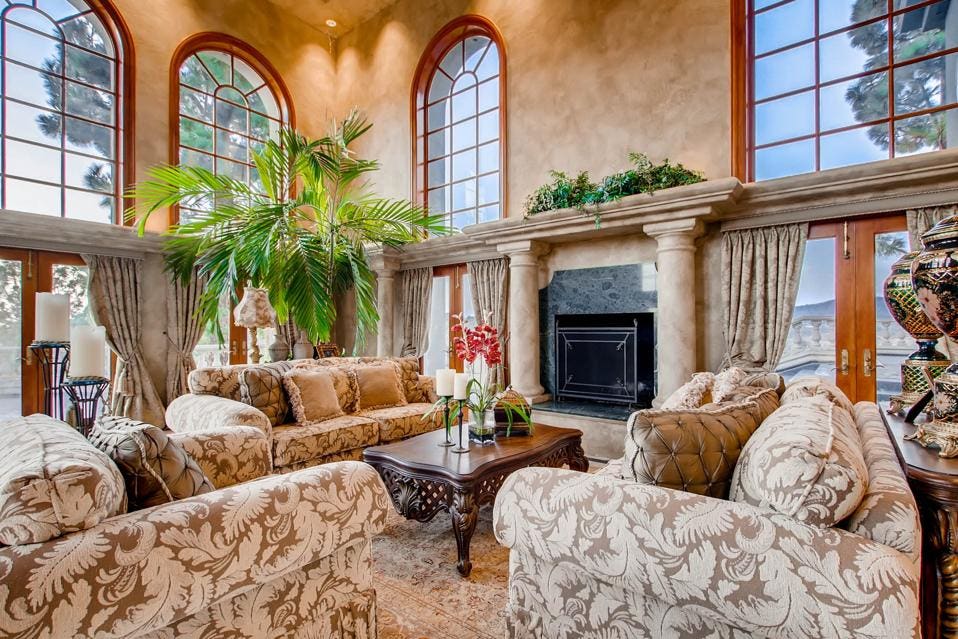 Marble floors gleam in the main living room, which is anchored by a column-flanked baronial fireplace. The ceiling extends more than two stories high, and a series of tall arched windows bring in natural light.

Another massive fireplace occupies one corner of the family room, which has a bar in the opposite corner. 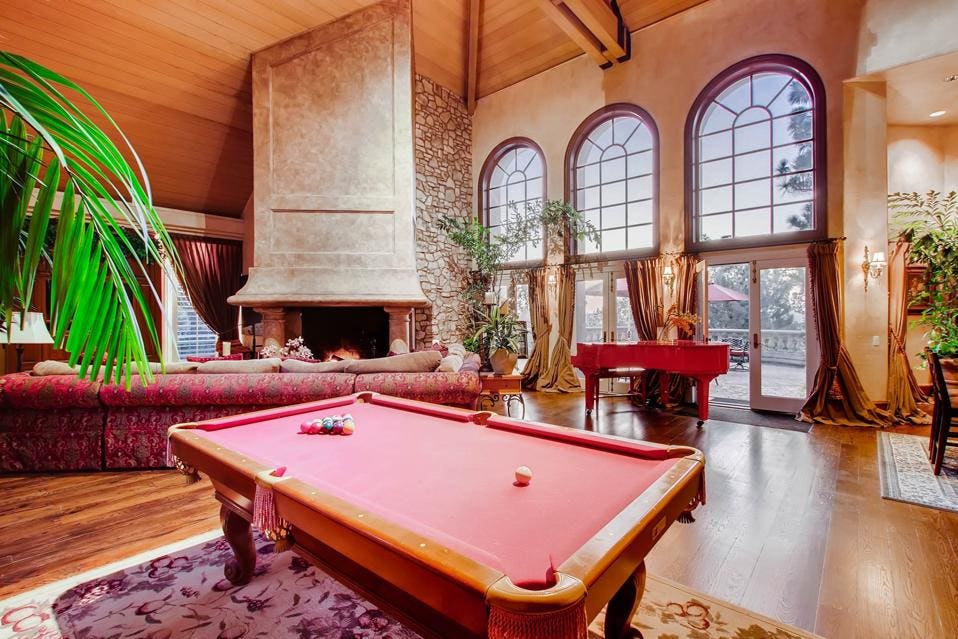 The center-island kitchen has bar seating along a peninsula and an adjacent casual dining area. The formal dining room can easily accommodate a party of 10.

The first-floor primary suite encompasses a sitting area with a fireplace, a wood-paneled library/office and a workout area. The primary bathroom has a fireplace, a sunken marble tub and a separate shower. Windows bring in expansive views.

There are three secondary en suite bedrooms – two with fireplaces – for a total of six bedrooms and eight bathrooms within the 9,090 square feet of interiors. 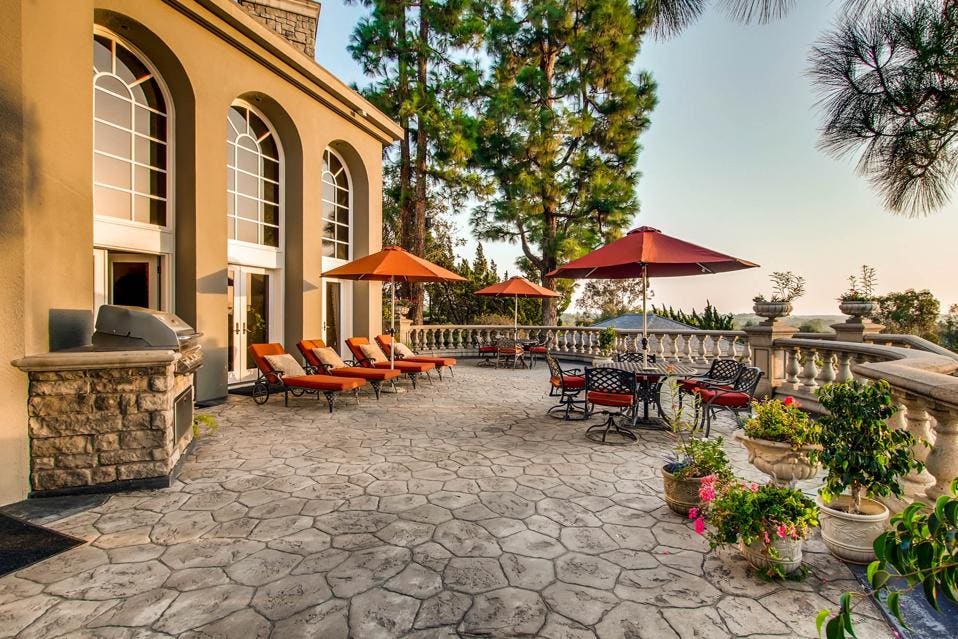 Decks extend the living space outdoors with dining and lounging spaces and a built-in grill.

A graceful stairway descends to the 65-foot-long free-form pool and spa with a boulder waterfall. A separate cabana is nearby. 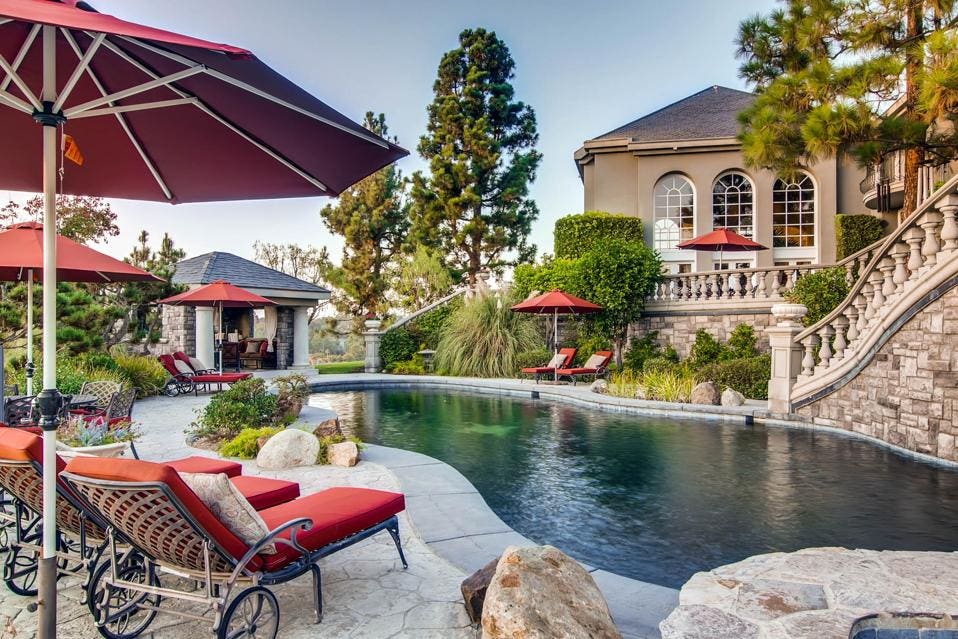 A free-form swimming pool with a spa sits near the house. (WILLIS ALLEN REAL ESTATE)

Two guest houses, of which one has a kitchen, and a tennis court complete the grounds.

Raini Gordy of Willis Allen Real Estate is the listing agent for 6103 Avenida Picacho, Rancho Santa Fe. The asking price is US $8.399 million.

San Diego International Airport is about 20 miles, or 32 kilometers, away.