What About $3.25 Million Buys Right Now In France, Spain And Switzerland

For international homebuyers on the hunt for a vacation home or pied-à-terre, the search often boils down to one factor above all else: location, location, location. In this week’s look at luxury real estate worldwide, I took a look at what’s for sale for around $3.25 million in France, Spain and Switzerland’s most coveted areas.

From a romantic apartment in Paris to a modern tour de force in Valencia, here’s a closer look at what’s on the market at that price-point:

This sun-filled apartment is located in Paris’ Notre-Dame-des-Champs district, an area named for the historic Roman Catholic church that resides there. Considered among the most friendly family districts in Paris, the site is home to exceptional schools and the Jardin du Luxembourg (translation: Luxembourg Gardens), a magical park-like setting created in 1612 by Marie de’ Medici, the widow of King Henry IV. 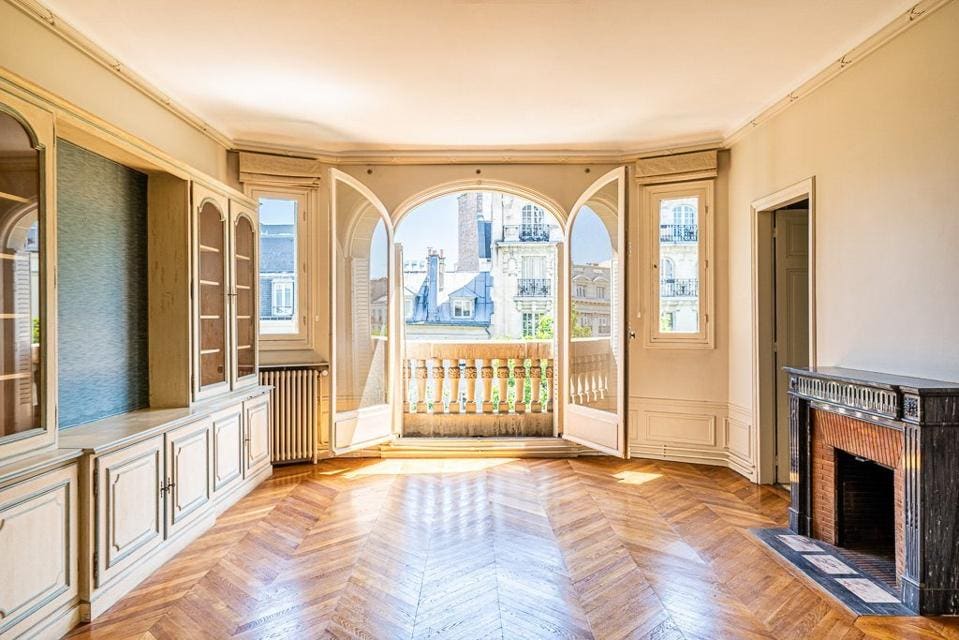 Features: A large entrance hall flows directly into the living room, which has a balcony and east-facing views of the surrounding area. Built-in bookshelves and storage fill the far wall in the living room, while a fireplace with a marble surround sits across on the opposite side of the room. Handsome herringbone-patterned wood floors run throughout the residence, which has four bedrooms, a lounge, a dining room and a separate kitchen. 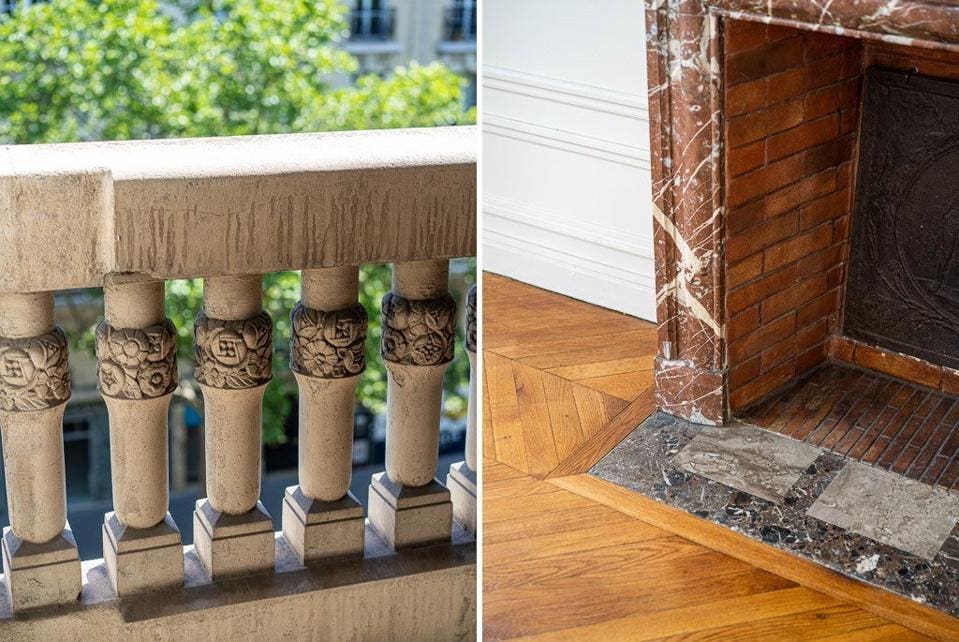 Other perks: Two of the apartment’s four bedrooms share an independent entrance with an elevator and separate bathroom facilities. The 20th-century building also has its own caretaker on site.

A masterful combination of stone and glass, this modern villa lies in Godella’s Campovilar, a luxury development located roughly 2.5 miles from the city of Valencia. A 19th-century castle lies at the heart of the development, which is home to more than 2,500 residents. The area features the prestigious British school known as Los Olivos. More than a half-dozen world-class golf courses are also a stone’s throw away. 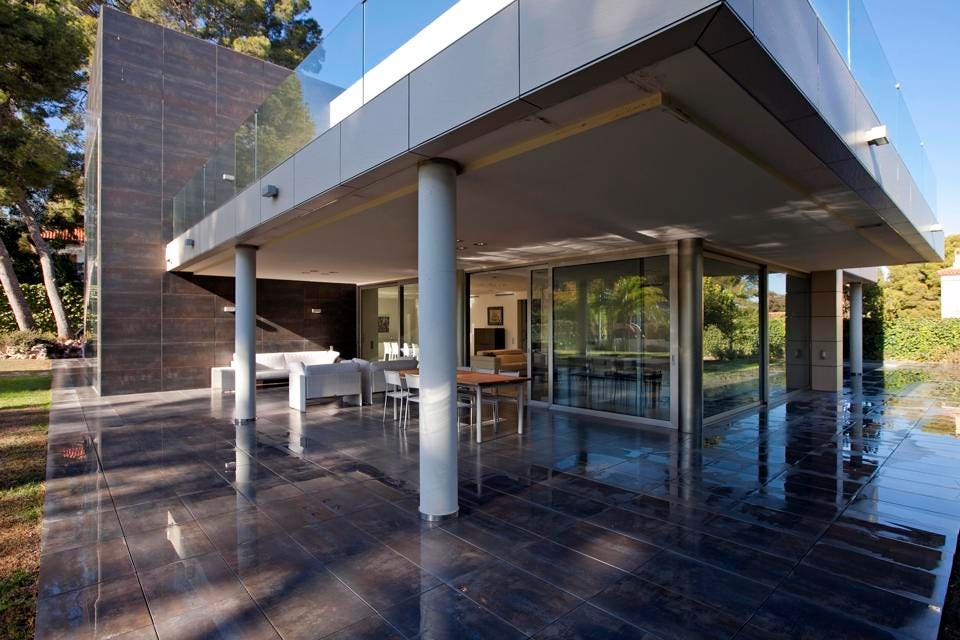 Walls of glass define this contemporary villa in an exclusive development near Valencia, Spain. (Immobiliaria Rimontgo

Features: The two-story home was designed for indoor-outdoor living and features pocketing glass walls that flow directly onto the covered patio space. A small breakfast room with a garden view sits off the gleaming chef’s kitchen, which features custom cabinetry and a broad island. A total of four bedrooms and five bathrooms lie within more than 3,200 square feet of curated living space. 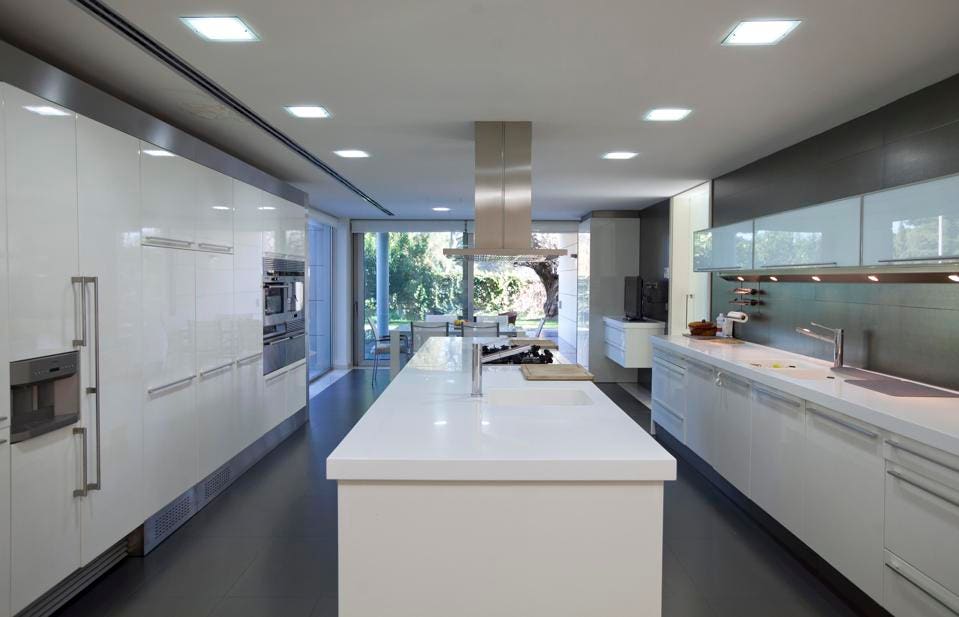 Gleaming white cabinetry and high-end appliances are among eye-catching details in the chef’s kitchen. (Immobiliaria Rimontgo)

Other perks: A two-story expanse of glass in the living room serves as both a statement piece and floods the living room with natural light. Walls of glass also line the family room and primary bedroom suite.

The charming village of Suchy lies in the canton of Vaud, a region brimming with historic architecture, gastronomic delights and the natural wonders of the Swiss Alps. This contemporary chalet-style residence is located 20 minutes from Lausanne, the capital of Vaud, and 10 minutes from the beautiful district of Yverdon-les-Bains. 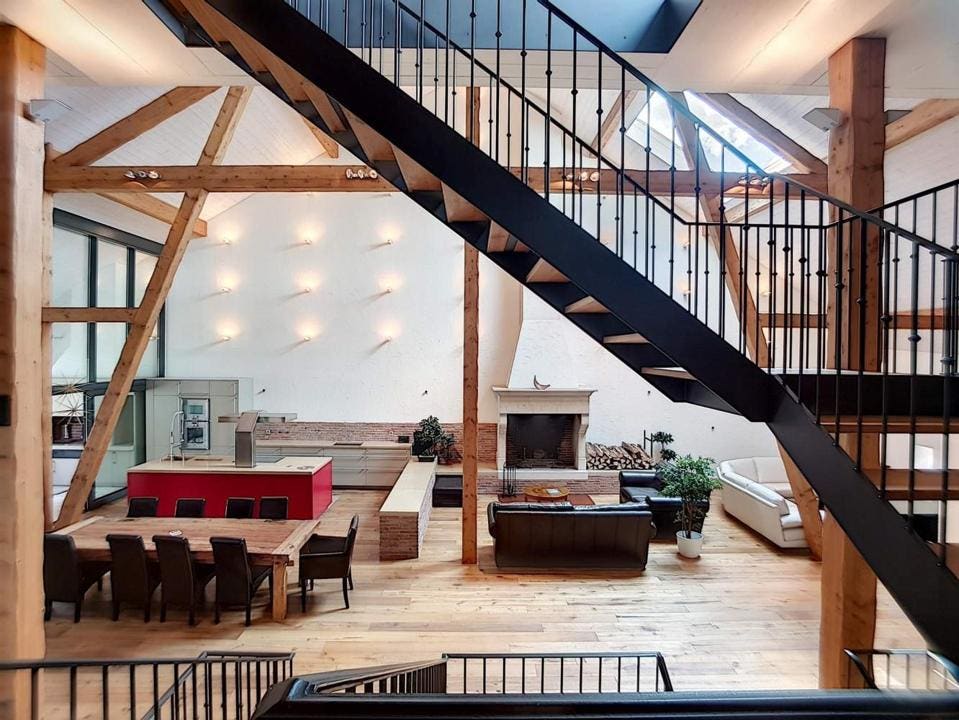 Features: High ceilings, angled beams and a sophisticated design aesthetic define the renovated village house with seven bedrooms and five bathrooms. Beyond the entry is a stone-clad entry that opens to an atrium-like space with a contemporary wrought iron staircase. Further inside, the floorplan is devoted mainly to open-concept space on the first floor, incorporating a living room, dining room and chef’s kitchen in the common area. 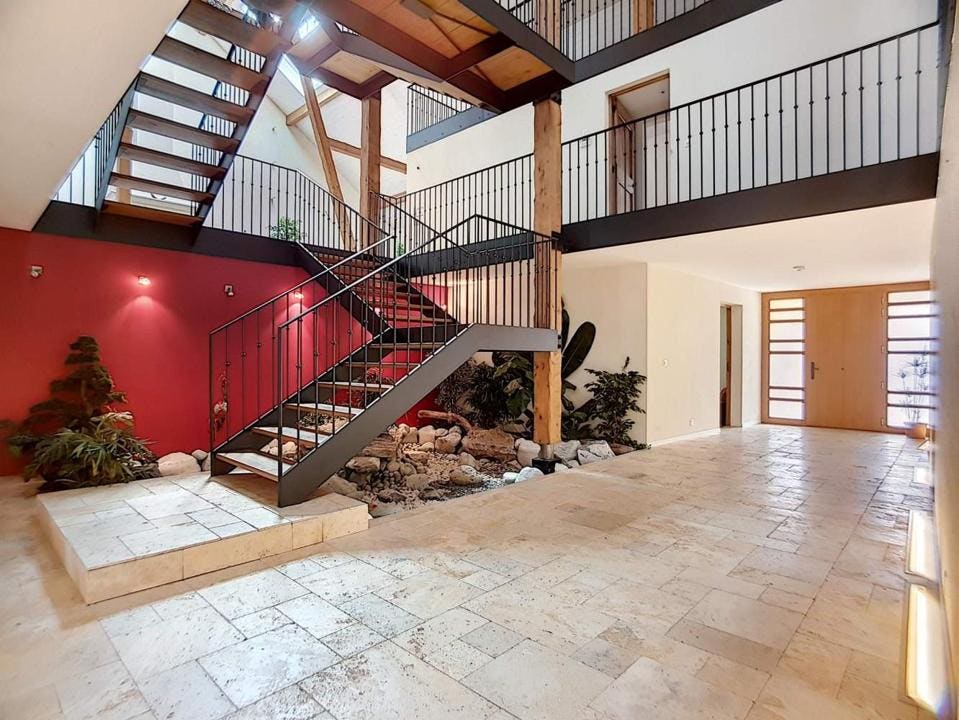 An atrium-like space sits beyond the entry. (Comptoir Immobilier)

Other perks: A large wood-burning fireplace in the common area is perfect for cold winter nights. A large skylight and floor-to-ceiling windows on the far wall keep the space well-lit. A private garage and additional outdoor parking means there is plenty of space for families and friends.