The Moody History Of An $8.5-Million Montecito Mansion

This grand mansion built in 1885 has deep roots in Montecito.

For three decades, it was the family home of the famed Moody Sisters, four women who left their mark on Santa Barbara housing by designing and developing what are known as Moody Sisters Cottages. Trailblazers at a time when few women had jobs outside the home, they carved out successful careers in the finance, interior design and architecture industries. 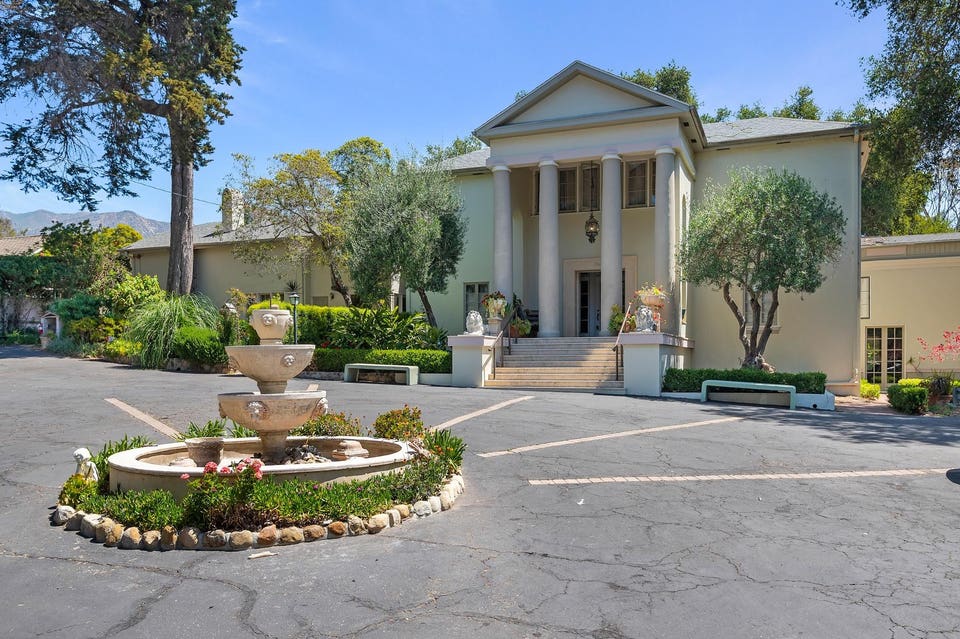 The Moody family bought the estate during the Great Depression (VILLAGE PROPERTIES).

The family was able to buy the estate during the Great Depression. Their father was a builder and all the girls worked so they had five incomes coming in, says their great-niece Marcia Gamble Hadley, an architectural designer and land planner herself. The sisters’ grandfather and grandmother also lived with them.

Before branching out into home building, the sisters were known locally for their English tearoom and antique store as well as the parties held in the home’s grand ballroom. “The big event,” Hadley says, “was always the Christmas party.” 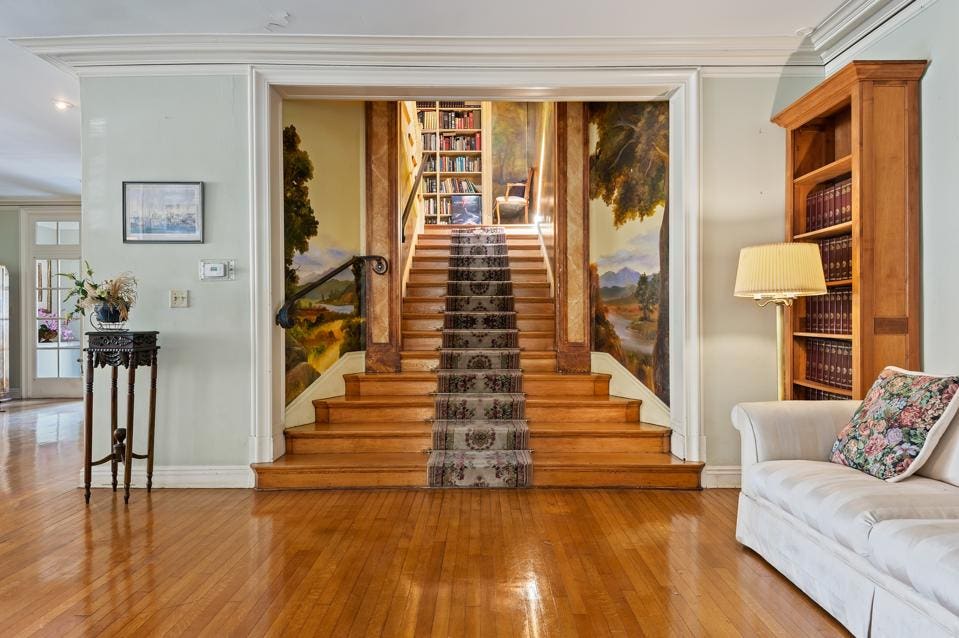 Descendants of the Moody Sisters say the big event of the year was always the “Christmas party” held in the home’s Julia Morgan-designed ballroom (VILLAGE PROPERTIES).

The redwood-planked, 3,000-square-foot ballroom was designed by Julia Morgan, the architect known for Hearst Castle. Musicians played above the room in a band box accessed by a hidden stairway. French doors opened out onto the rose- and wisteria-filled grounds.

Although often called The Big House by family members, the estate gained the name The Peppers for the trees that ringed the then six-acre property. 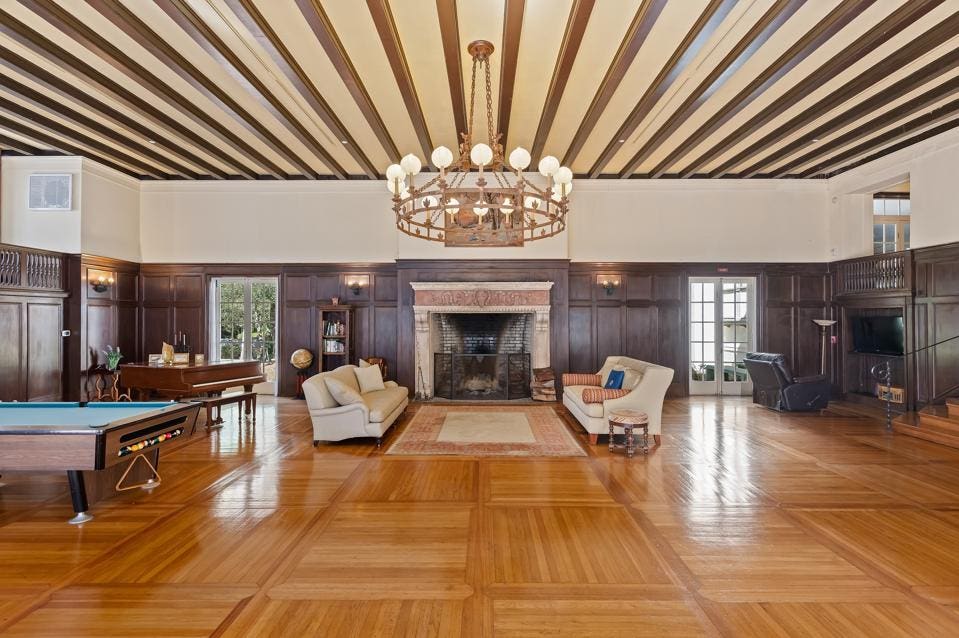 “I have wonderful memories of getting lost in the gardens,” says Hadley, who spent long summer weeks visiting the family.

Unlike the dozens of fairytale-inspired one- and two-bedroom cottages the sisters created in the 1930s and 1940s, the 10-bedroom dwelling they called home reflected the area’s turn-of-the-last-century fascination with European architecture.

A circular motor court rings a fountain at the front of the house, which is sheltered by a columned portico guarded by lion statues. Originally, Hadley says, wide brick steps led up to a pair of screen doors that entered a porch.

Beyond the foyer are a reception library and a powder room. The light-filled dining room features French doors. Wood or terracotta tile floors, high ceilings and crown moldings continue through most of the 8,189-square-foot house. 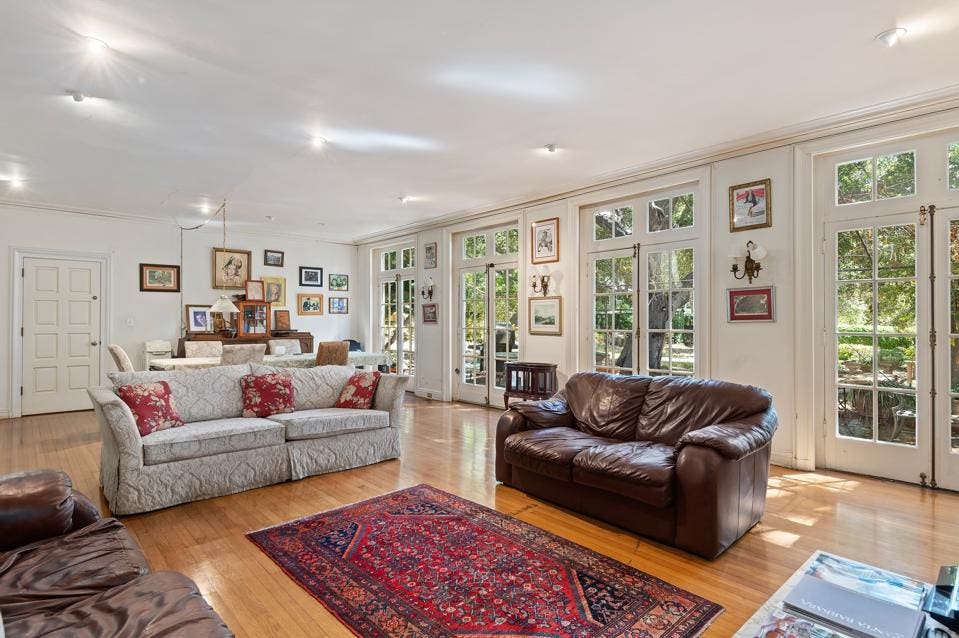 In the sisters’ day, the butler’s pantry served as a breakfast room, while a back porch was used for deliveries. A service staircase off the kitchen led to the staff quarters.

Today, wall murals decorate the stair landing and bathroom walls. Among the bedrooms is an 800-square-foot primary suite with a terrace overlooking the grounds. There are a total of nine bathrooms. 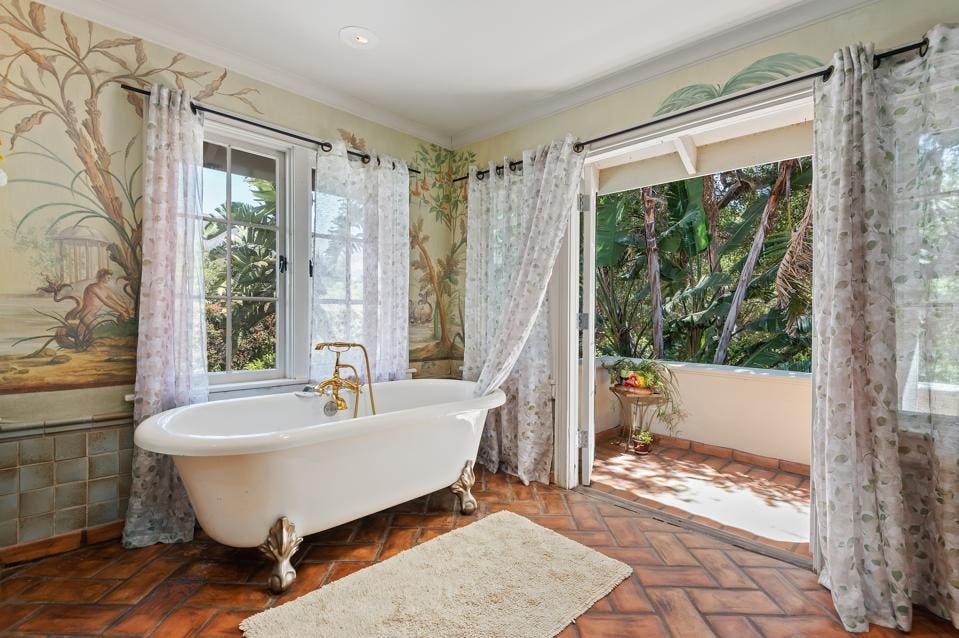 The estate has a total of 10 bedrooms and 9 bathrooms. This bathroom with a claw-foot soaking tub opens to a private patio overlooking the grounds (VILLAGE PROPERTIES).

Jeff Oien of Village Properties, a Forbes Global Properties partner, is the listing agent for the now 1.6-acre estate. The asking price for 430 Hot Springs Road, Santa Barbara, is $8.5 million.