A view of the water never gets old – even when the view has been enjoyed by homeowners since the 18th century.

This authentic French farmhouse is set near the seaside resort town of Cabourg along the English Channel in Normandy. Vacationers have been drawn by the moderate coastal climate and stunning beauty of the area since the 1800s when Cabourg became accessible by rail. 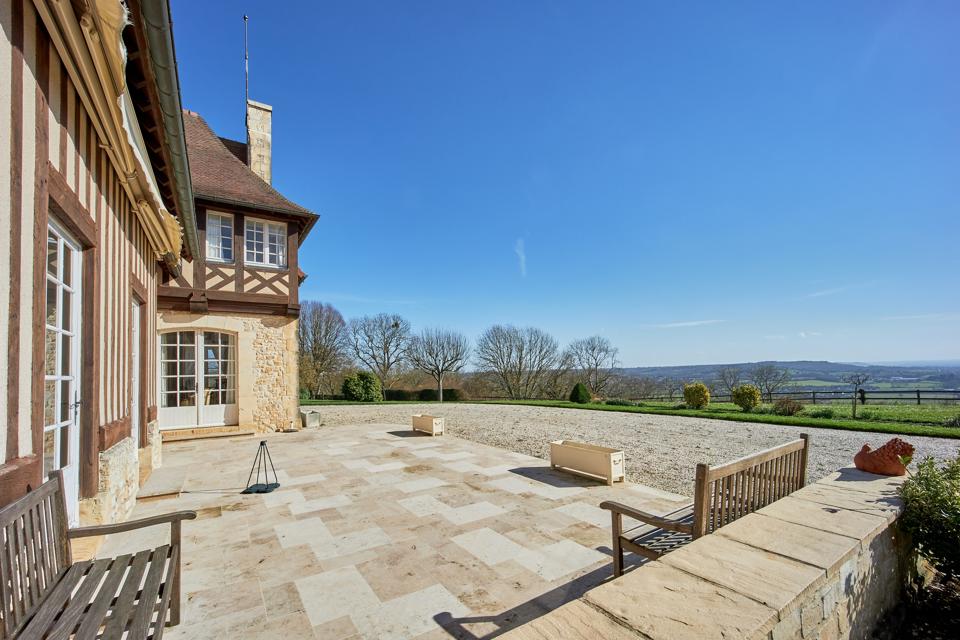 Since then, area has continued to attract the tourist trade with its 2.5 miles of fine sand beach, annual film festival, racetrack, casino and venerable Grand Hotel.

Cabourg’s Belle Epoque vibe has charmed many visitors over the years, including Marcel Proust. The novelist incorporated the setting into his fiction “In Search of Lost Time,” calling it Balbec. A more than two-mile-long esplanade on the waterfront is named Promenade Marcel Proust in his honor. 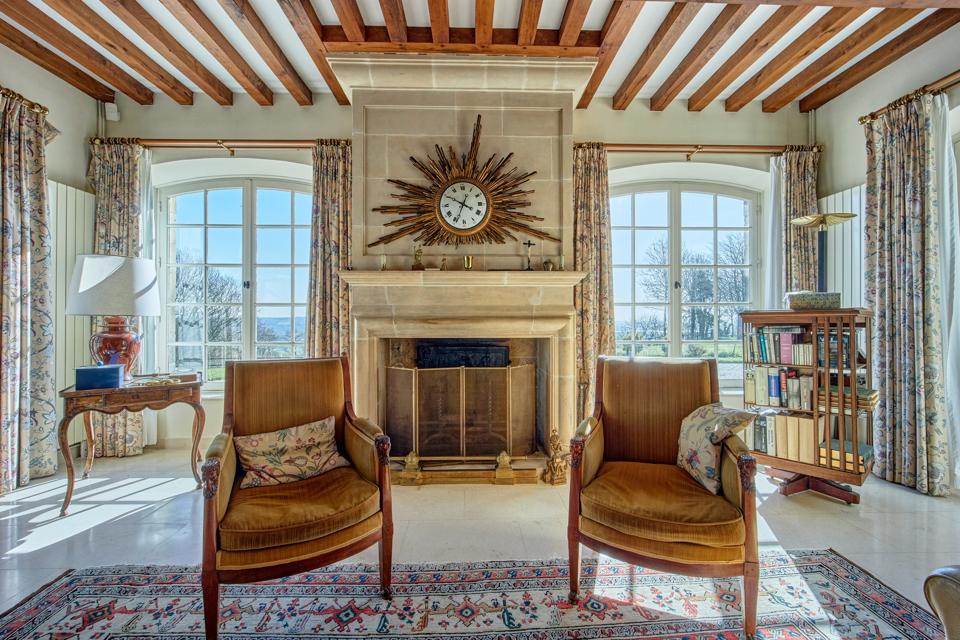 Set apart from the hustle and bustle of sightseers and beachgoers, the half-timbered home is sited on 15 acres of land, taking in both sea and sprawling countryside views.

Typical of the residential architectural style of rural Normandy, the house was renovated by the late architect and musician Antoine Berge, who was known for his preservation and restoration work. The structure weds stone and wood in keeping with the manors of Normandy’s Pays D’Auge area. 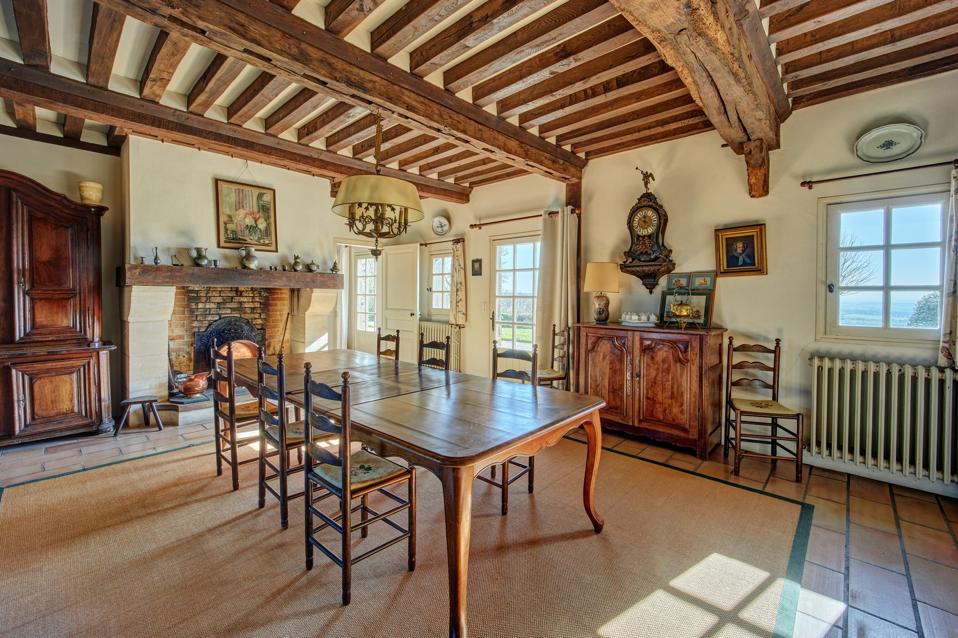 Inside, the farmhouse has two dining rooms, two living rooms, a library, eight bedrooms and four bathrooms within the 4,844 square feet of living space. (Groupe Mercure)

The two-story house could be reconfigured into two residences or kept in its entirety. There are two dining rooms, two living rooms, a library, eight bedrooms and four bathrooms within the 4,844 square feet of living space. The floorplan could also accommodate an elevator.

Multiple fireplaces and ceilings topped by heavy beams add a rustic elegance throughout the main house. 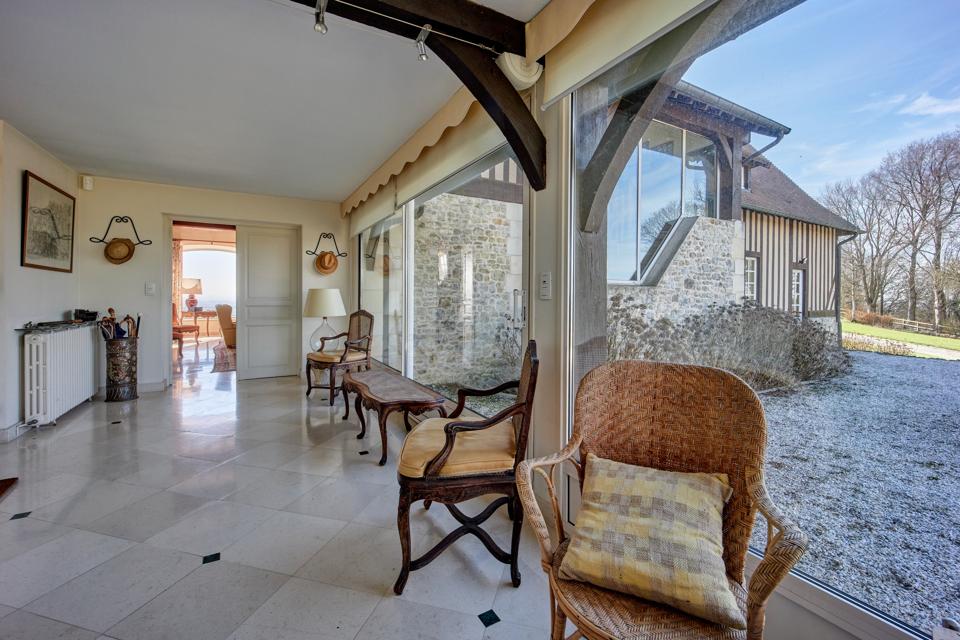 Portions of the 18th century farmhouse have been updated with expanses of glass. (Groupe Mercure)

The pitched roof and dormer windows create visual interest in the second-floor rooms, which have vaulted ceilings.

A south-facing terrace off the chateau opens to gravel pathways, lawn and panoramic vistas. A wine press, a workshop, a former distillery now used for gardening storage and four garages are also on the grounds. 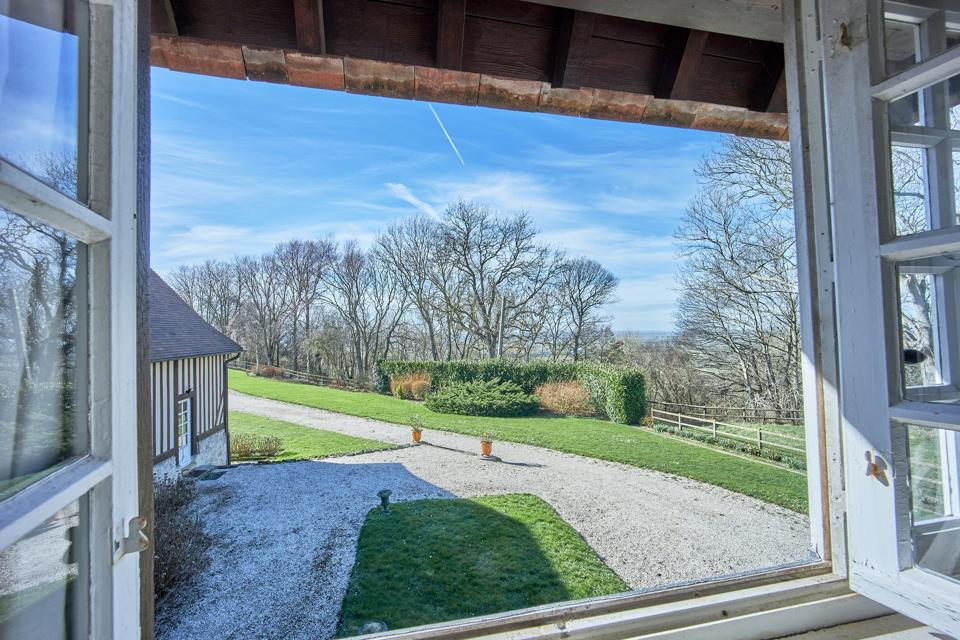 The asking price for the estate, which could be used as a family home or for business activities, is slightly more than $2 million. Sophie van Cayzeele of Groupe Mercure is the listing agent.

Cabourg can be reached by car ferry, train, bus or car train. International flights are available at Deauville Airport, about 20 miles east northeast of Cabourg, and the Caen-Carpiquet Airport, some 21 miles in the other direction. Paris is roughly two hours away.