Producer’s Compound In San Miguel De Allende Is A ‘Catch’ At $6.25 Million

If old town charm, modern luxury and outdoor living spaces are high on your wishlist, the vibrant home of Deadliest Catchand Storage Wars producer Thom Beers in the inland Mexican state of Guanajuato checks all the boxes. 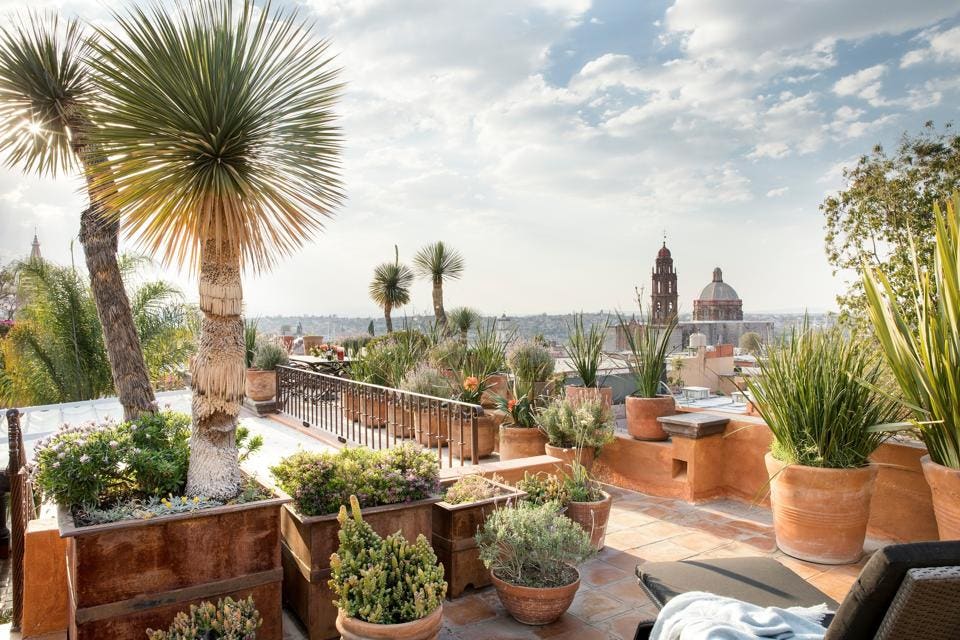 Called Casa Tres Cervezas, the turnkey property features two courtyards, plus rooftop and patio areas, that make the most of the temperate climate with indoor-outdoor living. Views take in the pink “wedding cake” towers of the neo-Gothic Parroquia de San Miguel Arcángel as well as other church spires. 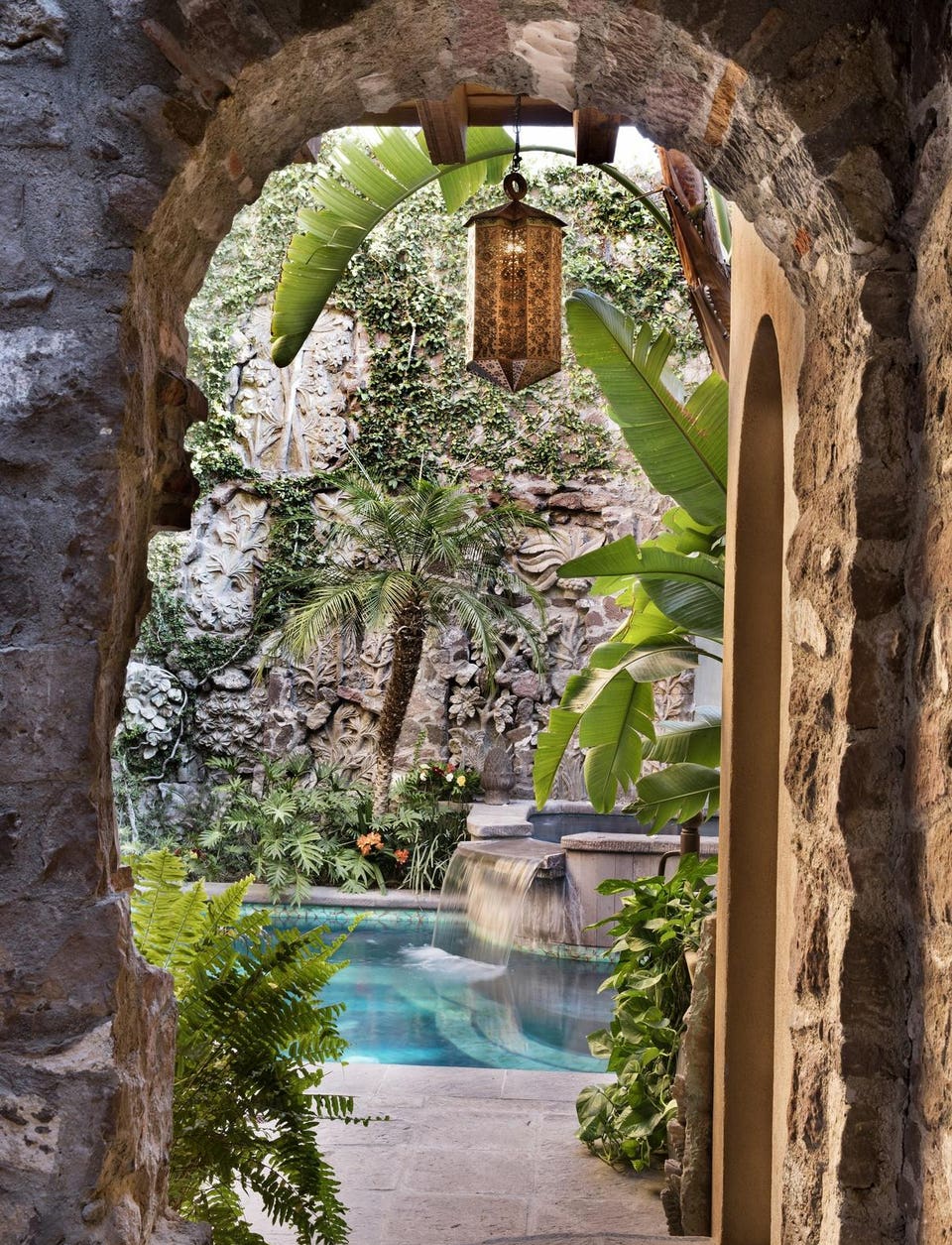 “The rooftop garden has a remarkable direct perspective of the churches that transports you into another time and space,” said Joseph Lown of CDR San Miguel, who is co-listing the property with fellow agent Eduardo Mora. 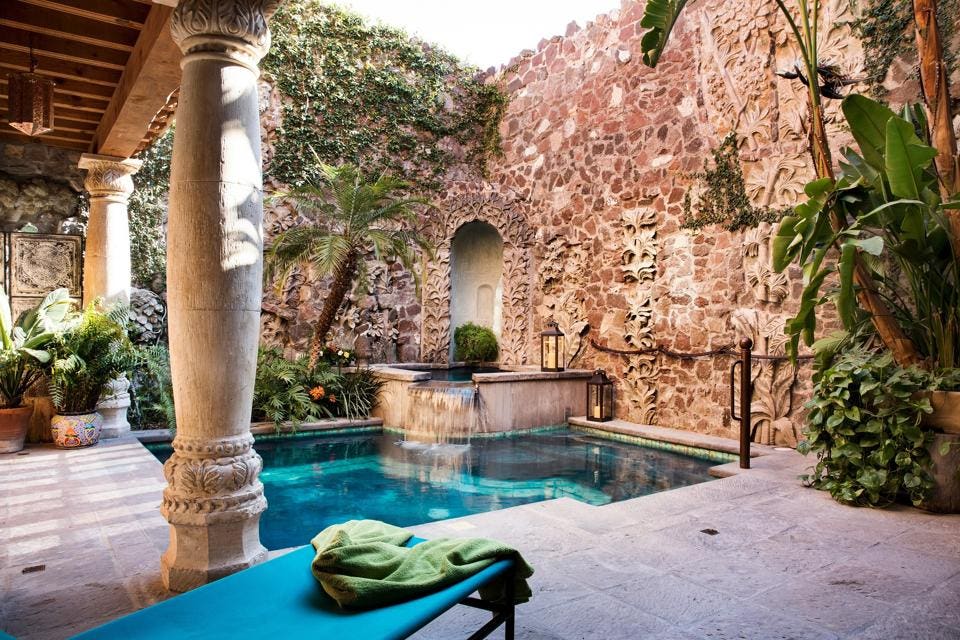 A heated swimming pool and spa sit in one of the courtyards, which connects to a yoga studio and a full bathroom with a changing area. Hand-carved stone walls and columns bearing botanical motifs surround outdoor spaces framed by plantings. 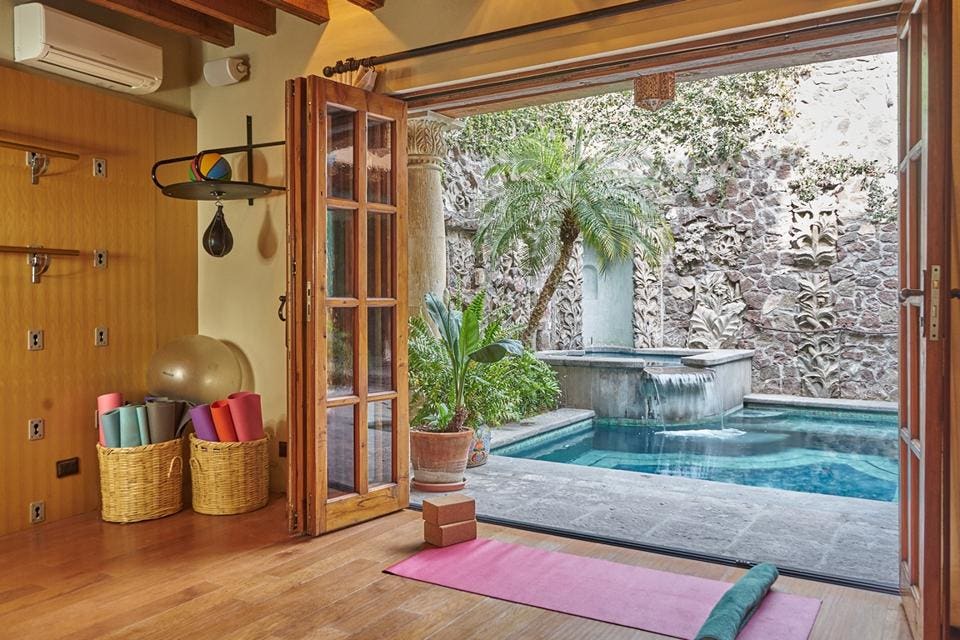 The property features multiple structures and has a yoga studio that opens to the pool (CDR SAN MIGUEL).

A lanai courtyard across from the living-dining room, bar and kitchen includes a shaded loggia with a lounging area and an in-ground fire pit. The rooftop deck contains an outdoor kitchen. 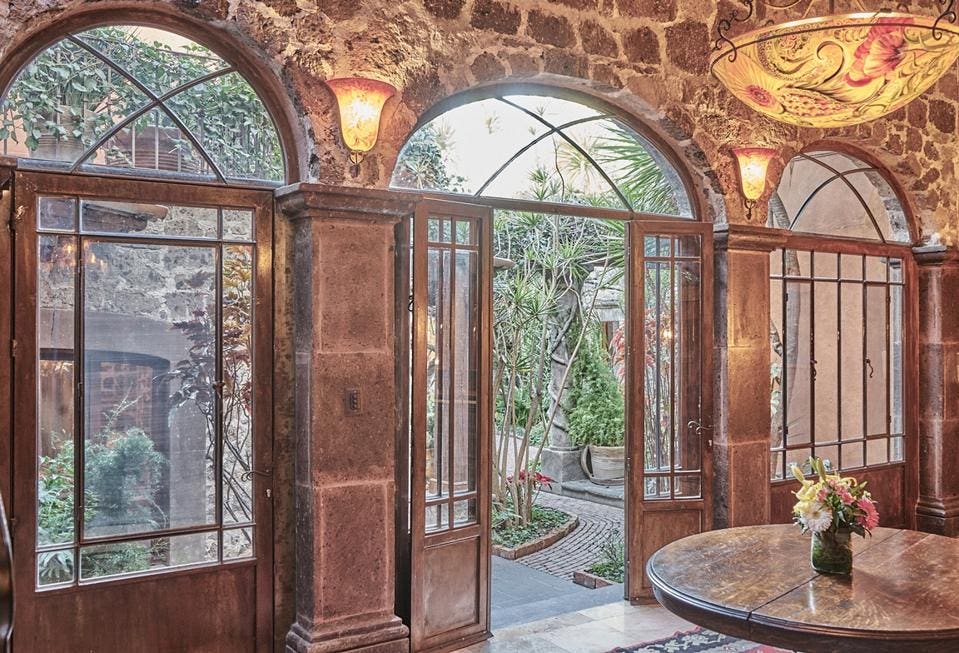 The grand entry opens into a living room with a stone fireplace and large skylight. The domed and arched boveda ceilings are made of brick. Metal and glass lighting fixtures, ironwork and concrete Mexican tile are among other details throughout the more than 11,000 square feet of living space. 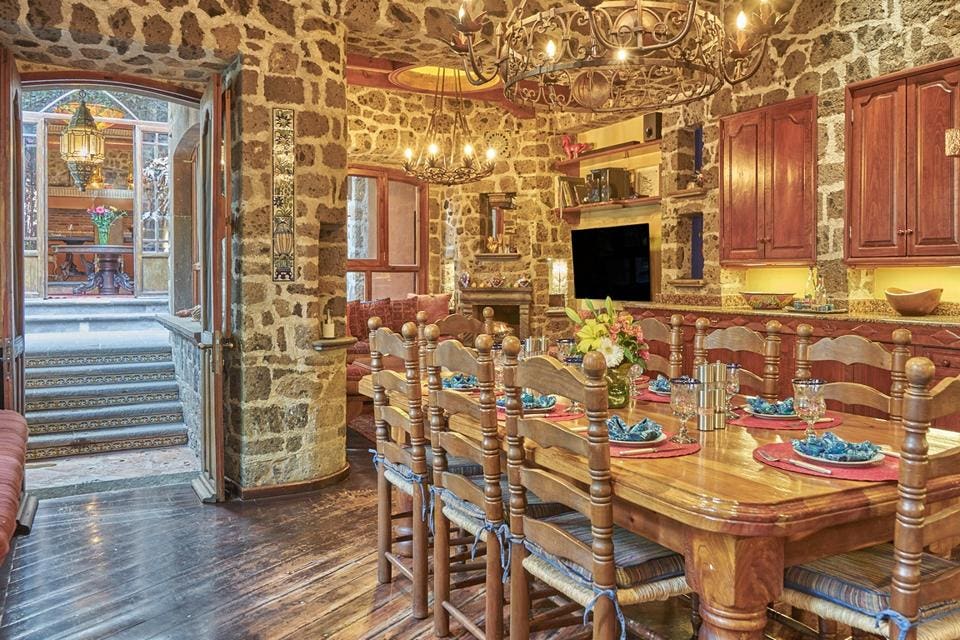 Lown says the level of craftsmanship reflects Beers’ appreciation of the vibrant community, roughly 10% of which is made up of expats. To create the compound, the producer pieced together five parcels of land and sourced artisans from all across Mexico to update the property while keeping it entirely authentic. 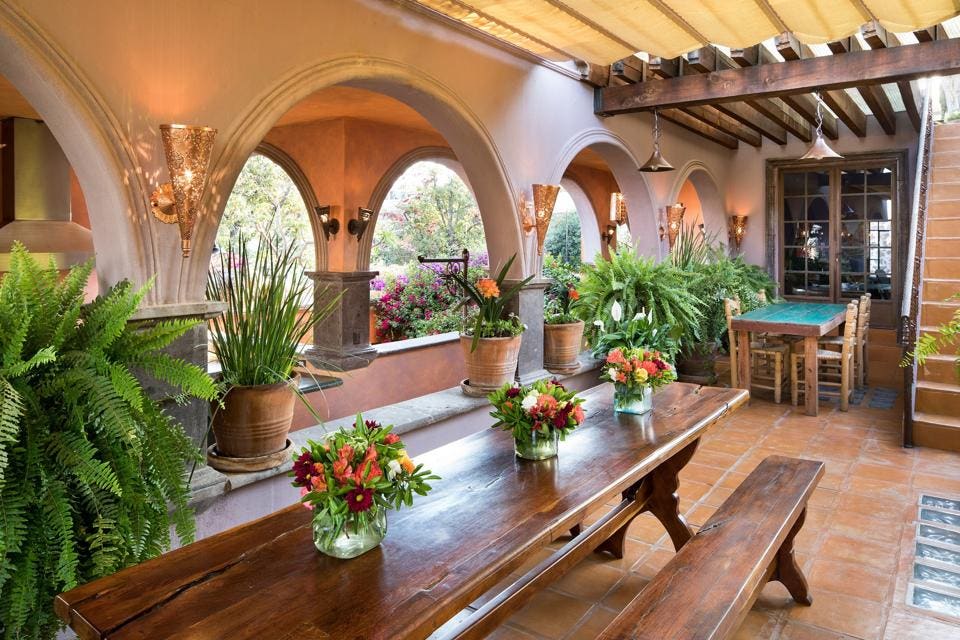 “Rarely do you find someone so in love with the Mexican culture that they are willing to work with an architect to keenly preserve and enhance a property such as this,” Lown said. “[Beers] sourced the best artisans from across Mexico to do the stonework, carvings, glass etchings, metalwork and even some of the home’s paintings.” 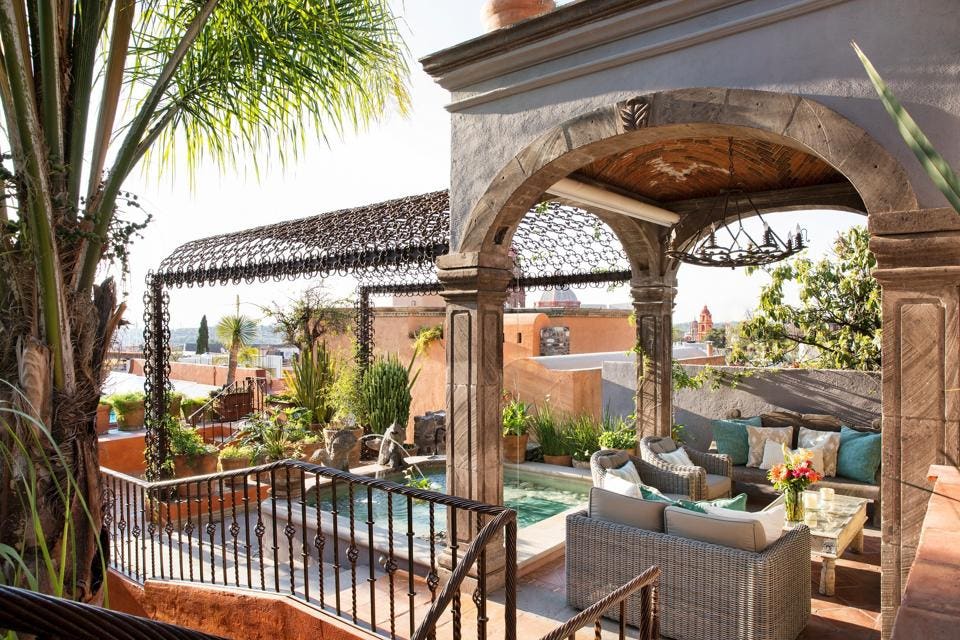 The attention to detail is further evidenced in the formal dining room, which pairs rustic stonework with a fireplace, cantina-style bar and floor-to-ceiling windows.

The stone-walled kitchen is large enough to accommodate a table for eight. A seating nook with a fireplace anchors one corner of the room. 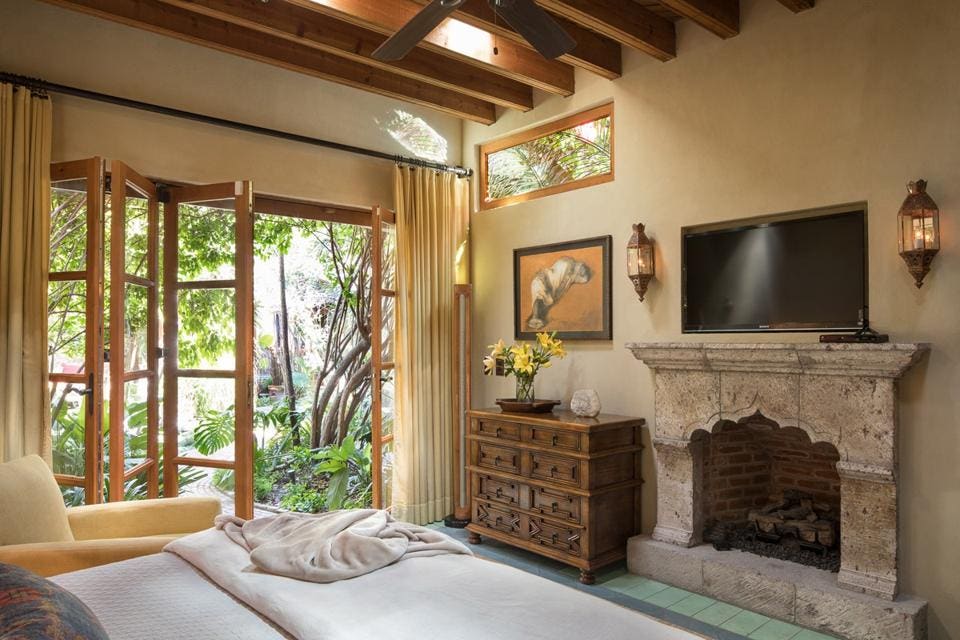 The compound has a total of nine bedrooms and nine bathrooms (CDR SAN MIGUEL | LAURIE BLACK).

Among the nine bedrooms is a suite with a loft. Another room has a skylight view of the koi pond for a total of nine bedrooms and nine bathrooms—and those are just the main living areas. 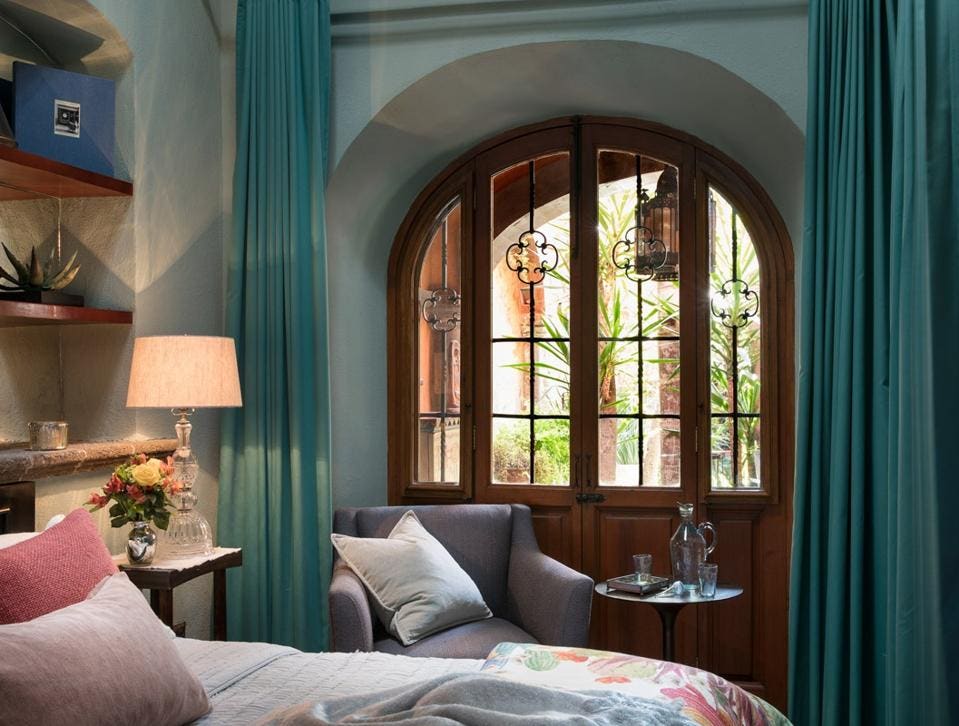 “There’s even a recording room with soundproof walls that doubles as an Xbox lounge,” Lown said.

The $6.25-million asking price includes a separate adjoining property consisting of a garage, a ground-floor restaurant space, some rustic apartments and a garden area—though most aspects can be negotiated separately. 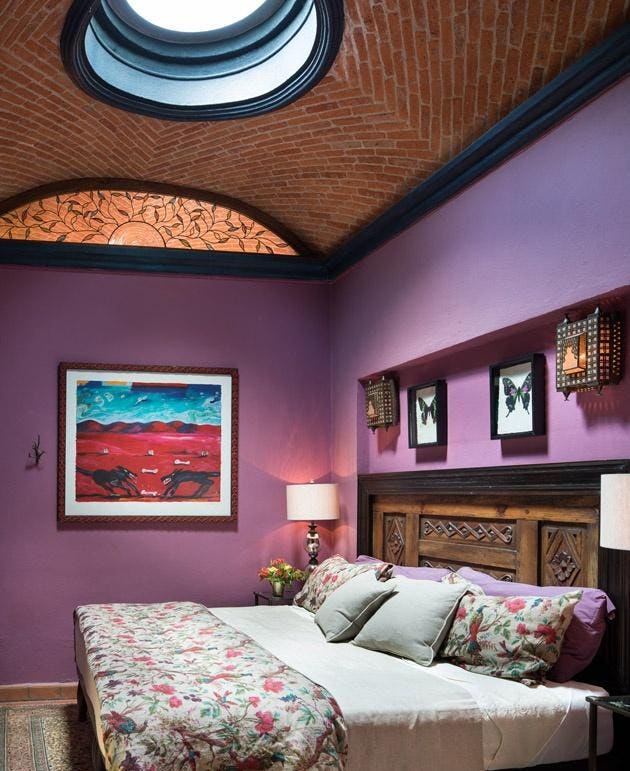 Domed and arched boveda ceilings made of rick top many of the living spaces (CDR SAN MIGUEL | LAURIE BLACK).

Suppose the owner is open to offering the property as a short-term vacation rental. In that case, the income produced is capable of paying for the carrying costs of the house, maintenance, utilities and staff fees, according to Lown.

Private parking is another added bonus. “Parking in the city center of any colonial town is golden,” Lown said. 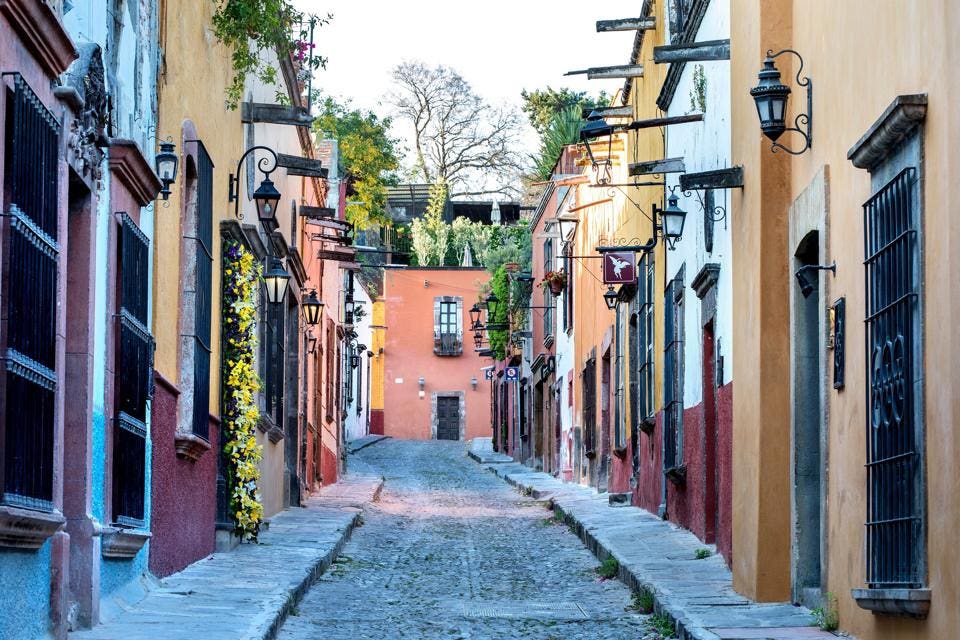 The Baroque Spanish architecture, cultural festivals and an active arts scene are among the attractions of San Miguel de Allende, which draws tourists and expats from around the world. The town’s historic core is designated as a UNESCO World Heritage site, requiring structures to retain their historic appearance. Homes painted in a palette of mustard yellows, red and orange hues line the narrow streets. 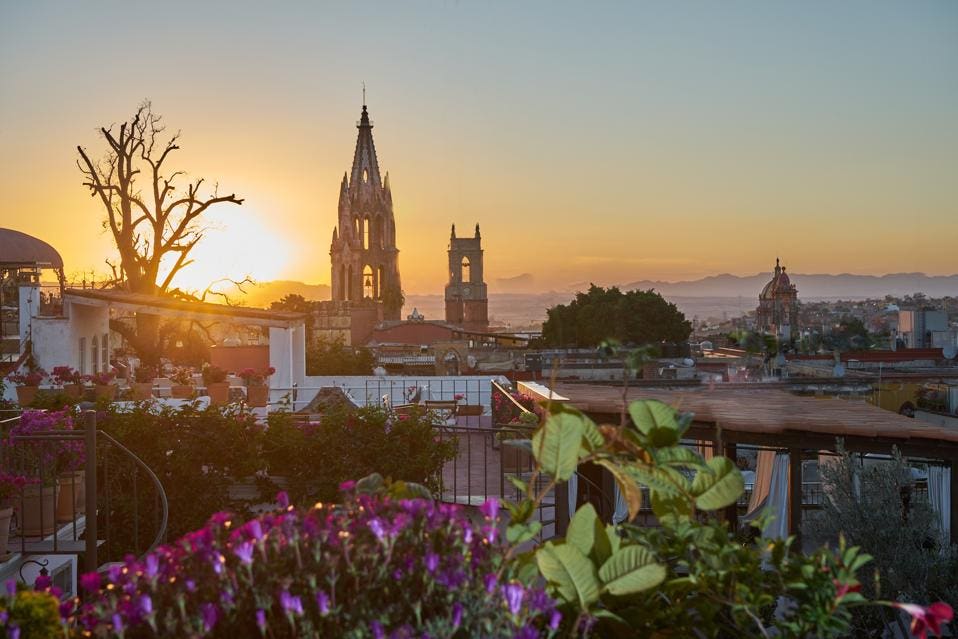 The Baroque Spanish architecture, cultural festivals and an active arts scene are among the attractions of San Miguel de Allende, which draws tourists and expats from around the world (CDR San Miguel).

The nearest international airports are Del Bajío International Airport in Guanajuato, about 58 miles to the west, direct flights to Los Angeles, and Querétaro Intercontinental Airport, some 56 miles away in Querétaro. San Miguel de Allende is about 150 miles north of Mexico City.