One would be hard-pressed to find a private estate for sale in all of France with more notable gardens. They are, in fact, listed by the French Ministry of Culture as one of the country’s more than 300 Remarkable Gardens of France.

The 9 hectares, or about 22 acres, of park-like grounds and formal gardens surround a chateau that dates to the 13th and 15th centuries. The property is near the village of Orcival within the Puy de Dôme area of central France. 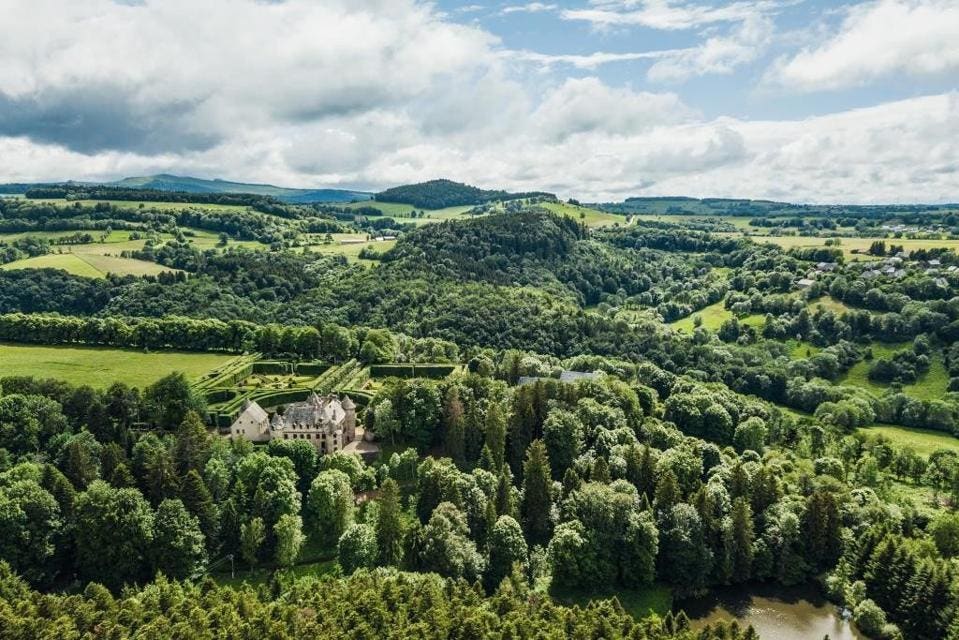 Once a castle, the chateau was demilitarized in the 17th century and transformed into a residence. (Groupe Mercure)

Built originally as a castle, the property belonged to the same family for nearly 400 years. The fortress was demilitarized in the 17th century, as were many others were due to the political climate of the times, and rebuilt as a residence.

The gardens were added in the late 1600s. They were designed by the studio of André Le Nôtre, the gardener to King Louis XIV and the landscape architect whose French formal gardens grace the Palace of Versailles.

The chateau gained renewed notice when it was used as the setting for Nobel Prize-nominated writer Paul Bourget’s 1914 novel Le Démon de Midi. 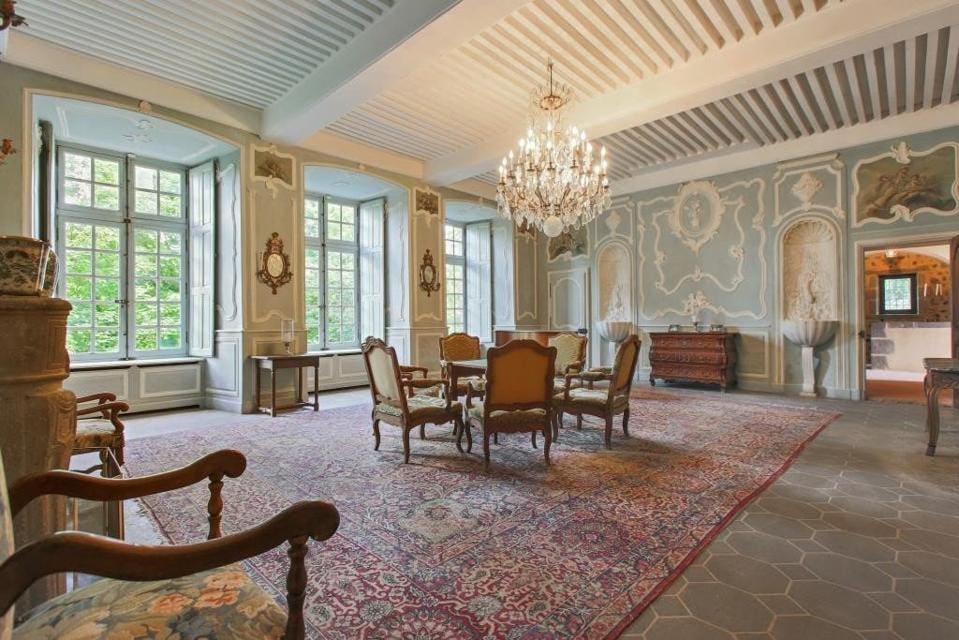 During World War II, the location – far from the zone of Nazi occupation – was used to safeguard the archives of the University of Strasbourg and the French National Library.

The chateau and gardens were restored in the mid-1960s.

Hornbeam trees line the driveway to the chateau, which retains the defensive towers that give it a fairy-tale like appearance. The stone facade retains what are known as machicolations – corbel-supported openings through which burning embers or stones could be dropped on attackers. 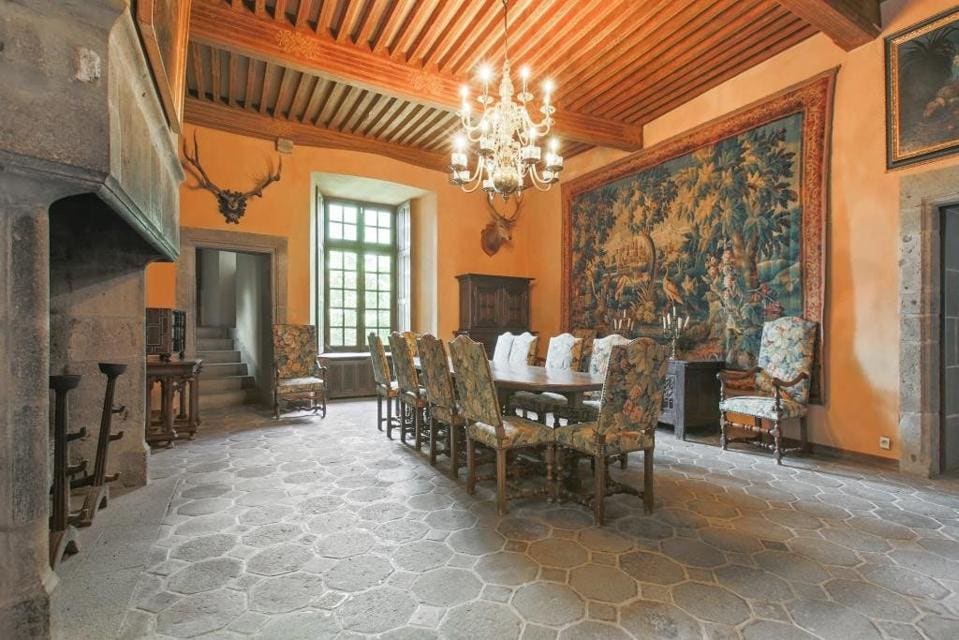 A topiary garden with fountains sits in the courtyard. Nearby is a labyrinth, which leads to a rose garden. Precisely trimmed hedges surround two more formal gardens with manicured lawns.

The interior has the air of an aristocrat’s country home. A 16th-century marble altarpiece, decorative 18th-century plaster moldings, garrison rooms and dungeons add a museum-like quality. 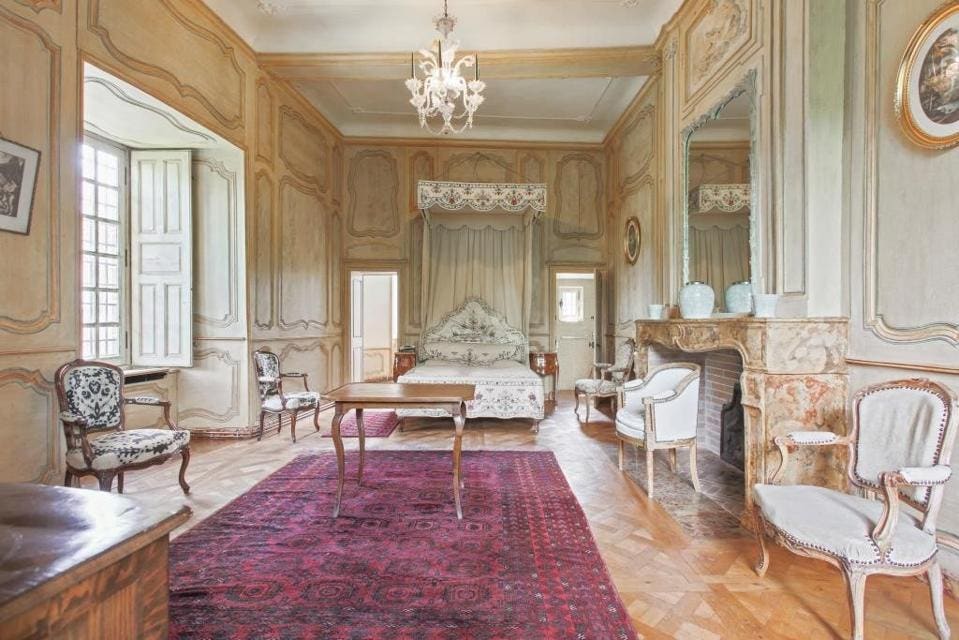 A coved ceiling, ornate walls and a chandelier are among decorative details in one of the bedrooms. (Groupe Mercure)

Outbuildings include an annex house, a renovated farmhouse, garages, stables and a barn.

Sophie van Cayzeele of Groupe Mercure is the listing agent for the property, which is priced at 2.5 million euros or nearly US $3 million.

Orcival, centered on the 12th century Basilica of Notre-Dame, has long been a pilgrimage destination. 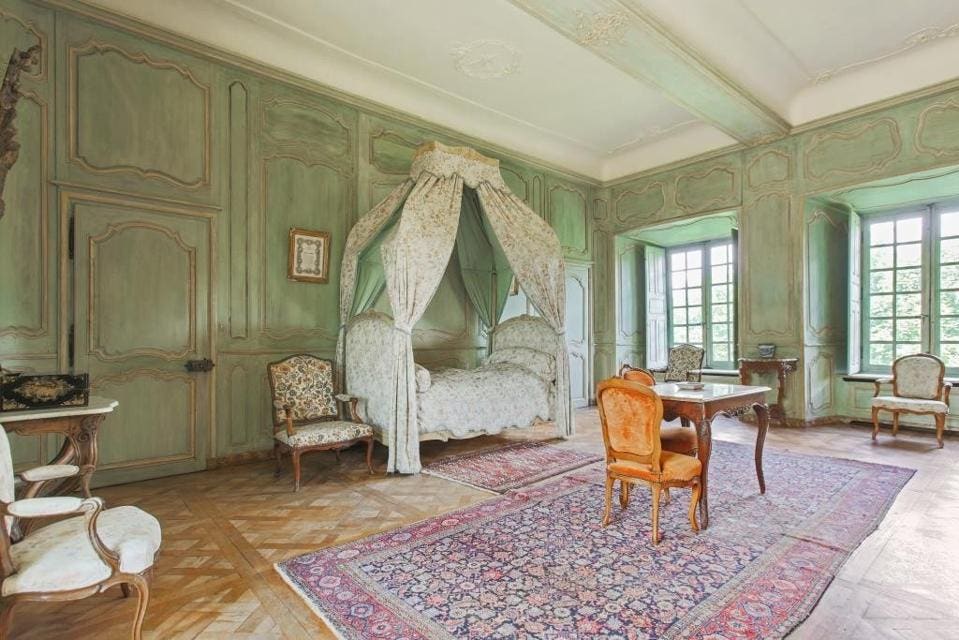 There are 12 bedrooms in the chateau. (Groupe Mercure)