Living In History: The House That Wilt Chamberlain Built

Most houses with “celebrity pedigrees” earned the distinction because a larger than life figure lived there. But in other cases, the notable figure also built the house themselves.

Welcome to 15261 Antelo Place in the Los Angeles community of Bel-Air. The angled mass of concrete, steel and stone, surrounded by water elements, is listed at $14.9 million. It’s the house that basketball great and four-time MVP Wilt Chamberlain built.

Much of how this muscular contemporary came to be is documented in a television interview the then Lakers star gave in 1972 and on the website of the monolith’s architect, David Tenneson Rich.

Originally christened as Ursa Major, the showplace takes its inspiration from the Brutalism style of architecture, the works of Frank Lloyd Wright and the travels of its legendary owner. The name Ursa Major evokes Chamberlain’s nickname, the Big Dipper. The 7-foot-1 center earned that moniker for having to dip his head when he walked through doorways. 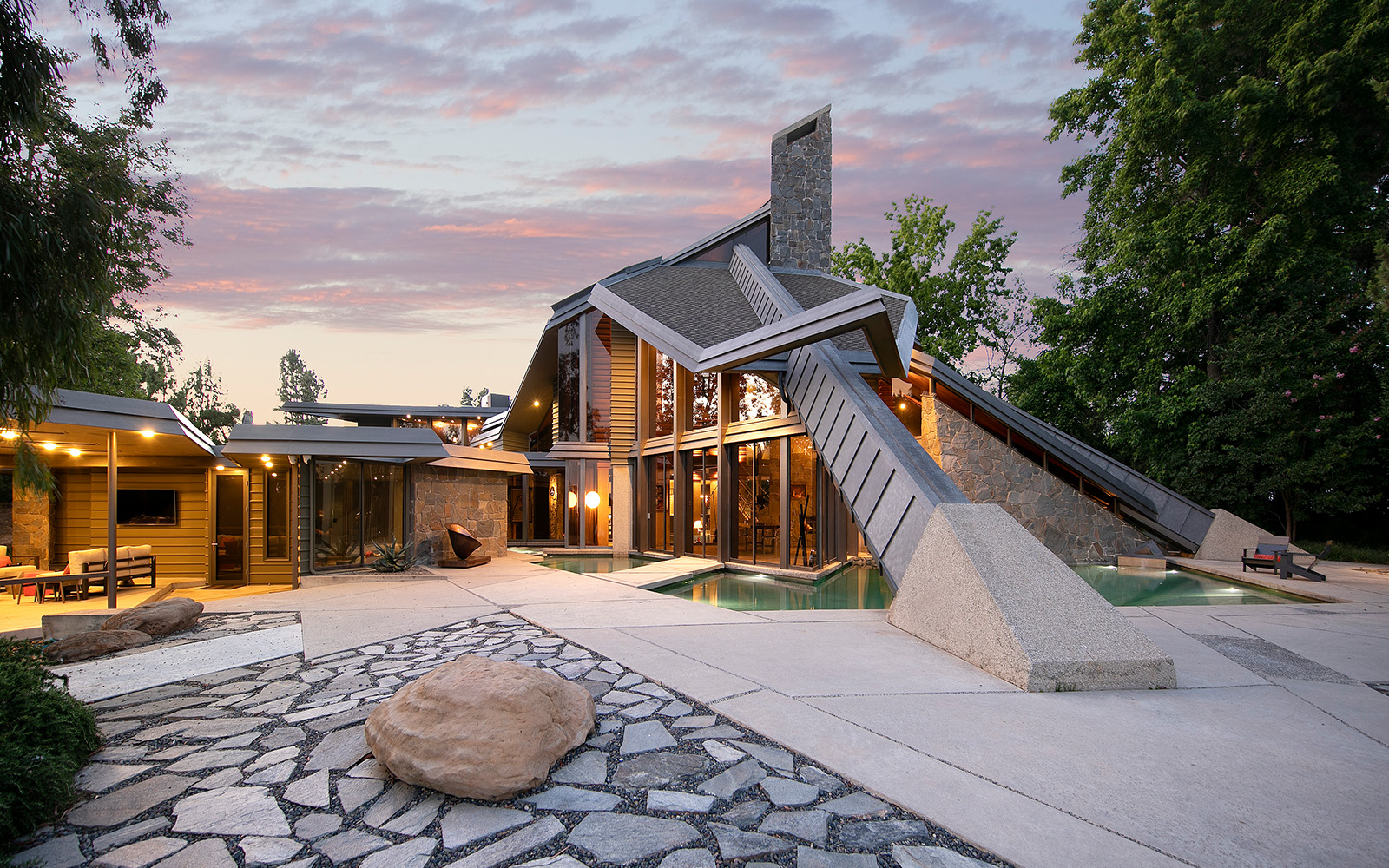 Chamberlain and Rich met through a mutual friend tasked with the job of finding a hilltop lot suitable for a trophy home. The architect joined the hunt and combed the Santa Monica Mountains by helicopter until he spied a former cold war missile location.

When they visited the site, Rich drew the shapes of a square, a circle and a triangle in the dirt. “Wilt stood inside each one,” Rich recounted on his website. “I said, ‘Wilt, this is your house, which one feels right for you?’ The triangle was where Wilt felt immediately comfortable.”

Once the predominant geometric shape was determined, proportion came into play.

“The volumes, spaces, door heights and such were not designed for the tallness of the man, but rather the sense of self, and a love of openness and great spaces,” Rich recalled on his website. 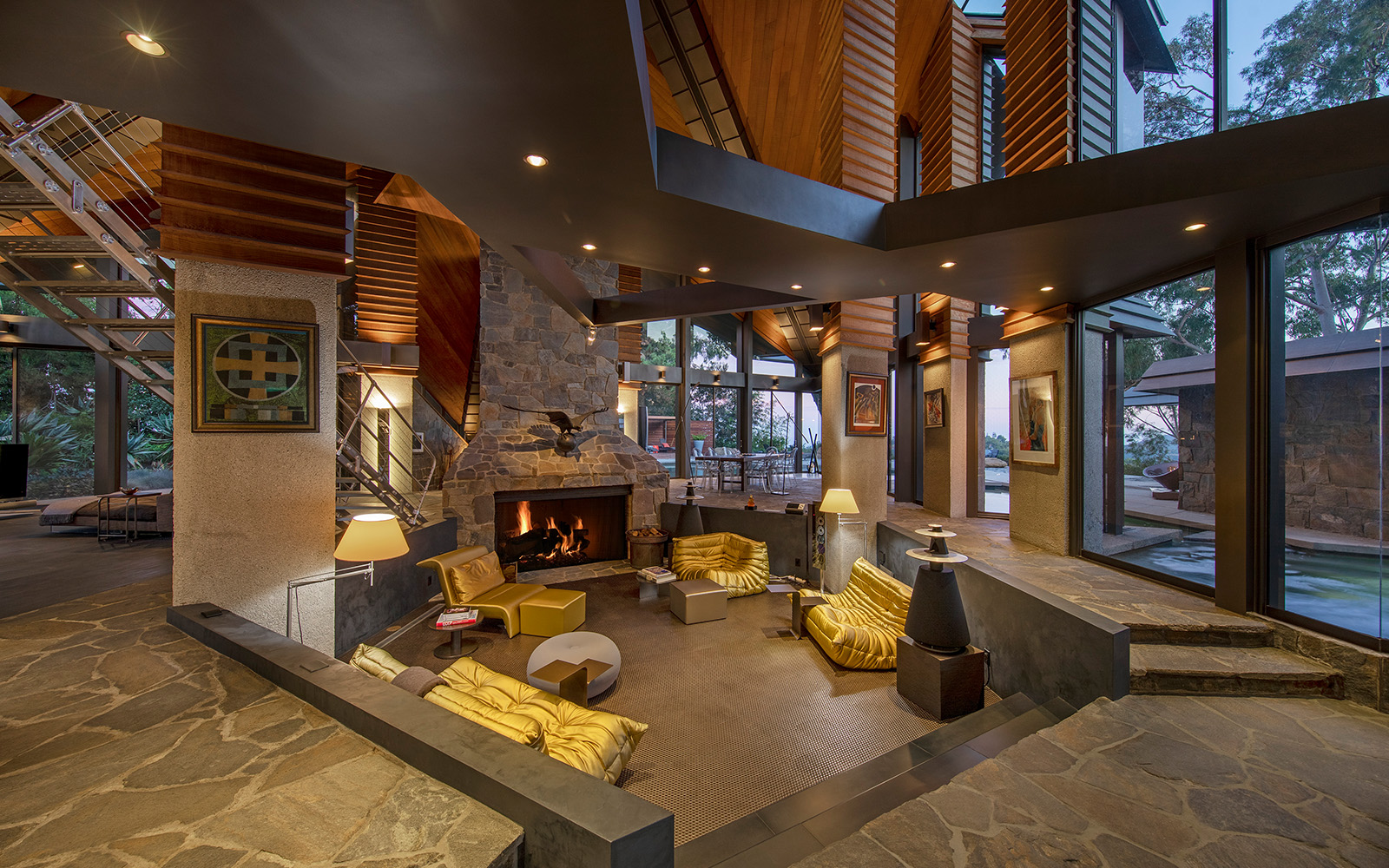 A conversation pit anchors the great room, while wood columns above are intended to evoke a redwood forest.

The television interview recorded not long before Chamberlain won his second NBA Championship speaks to the careful thought the player put into all aspects of the structure. “I have friends of all ranges of sizes,” he said, “and it’s important to me that they feel comfortable in the house.”

At the heart of the soaring great room is a sunken conversation pit with a wood-burning fireplace and stone chimney. Redwood is plentiful. The intention was to evoke a stand of trees. Chamberlain likened the result to a “cathedral look.”

The architect suggested that used brick would complement the redwood. But the athlete, who had grown up in Philadelphia surrounded by brick homes, nixed the idea. Instead, the pair went with natural stone from nearby Bouquet Canyon.

Water also became a building component. Reflecting pools flank the walkway to the entry door, and the swimming pool extends below a wall into part of the great room. “You had to swim under to get out,” Rich explains in a phone interview. 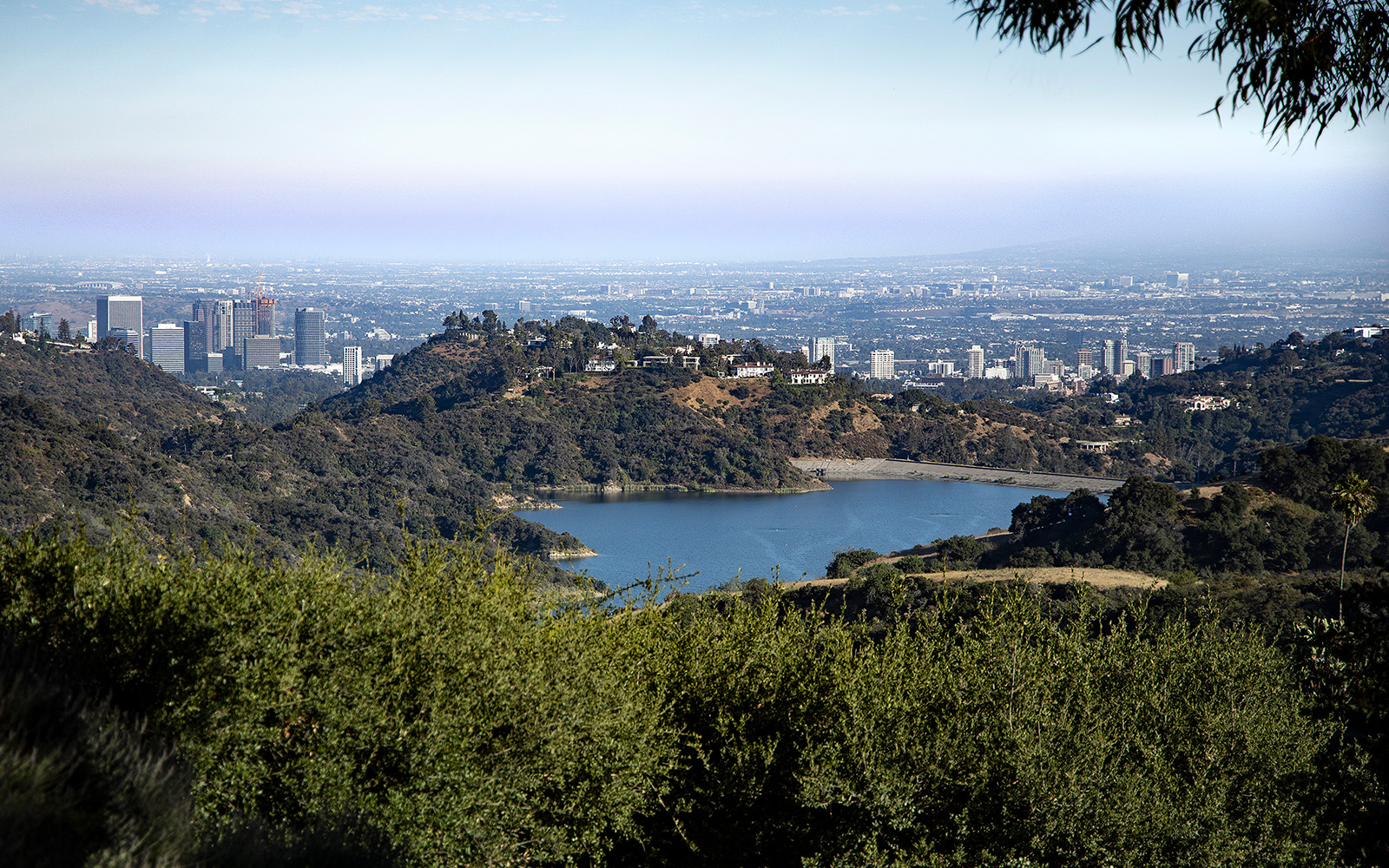 The more than 2.5-acre site has parking for 10 cars and takes in views of Stone Canyon Reservoir and the cityscape.

During Chamberlain’s time, birds were a common motif throughout the house. In a nod perhaps to that preference, an eagle sculpture adorns the fireplace today.

The house has gone through multiple owners and updates throughout the years, making it difficult to discern what parts are original. But clues can be found. “Whoever buys it should go to the city to find records of what’s been done,” says Rich, who visited the home several years ago.

The expanded and renovated property contains six bedrooms and eight bathrooms within its 9,395 square feet. The kitchen Chamberlain once described as “groovy” now features sleek lines and stainless-steel appliances. A sauna stands poolside.

The more than 2.5-acre site has parking for more than 10 cars and takes in views of Stone Canyon reservoir and the cityscape.

Drew Fenton of Hilton & Hyland, a member of Forbes Global Properties, is the listing agent.