When it comes to a home with a celebrity pedigree worth boasting about, it’s hard to beat a box-office giant with an Oscar in hand. But this place also has a musician of note in its recent ownership history.

Red Oak Manor is part of actor Leonardo DiCaprio’s real estate portfolio. He bought the Los Angeles-area Tudor three years ago from Moby, who had restored and tastefully reimagined the space. The singer-songwriter-DJ updated the 1926 home while retaining many of its original architectural details. 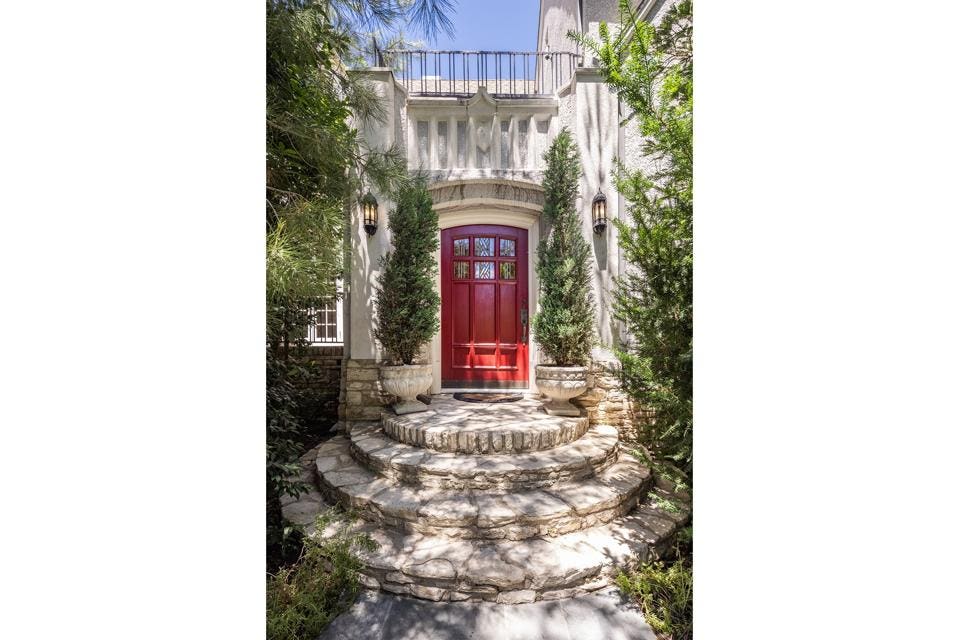 The slightly arched front door has glass inlay work and is painted an appealing shade of red. (Hilton & Hyland)

Inside the outer gate, stone steps lead up to a slightly arched front door, which has glass inlay work and is painted an appealing shade of red.

A wide entry hall with a wooden floor and white walls opens to a landing and a staircase. The arched ceiling continues the line of the front door. 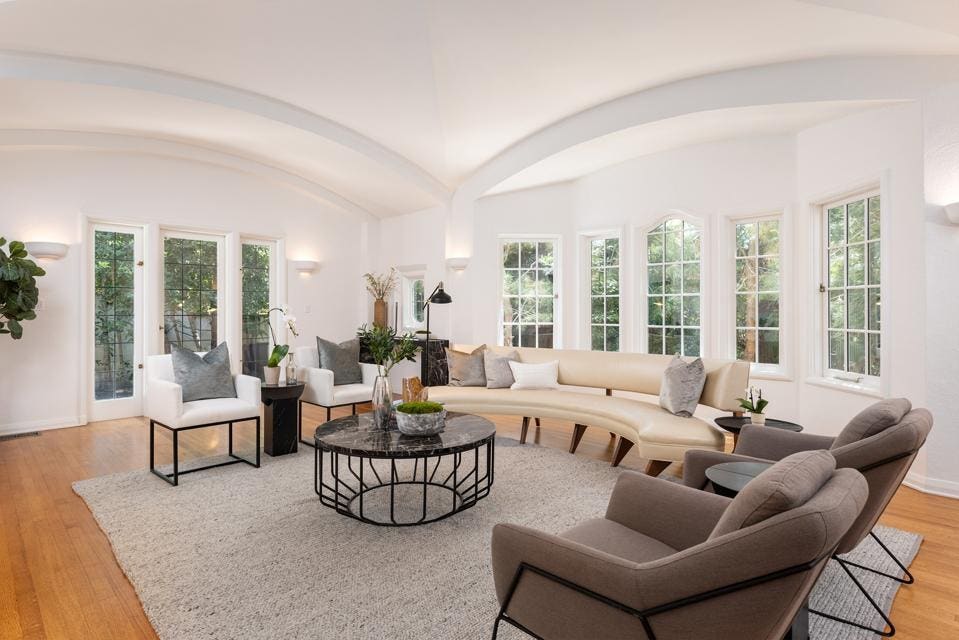 A gently arched ceiling cocoons the living room, which contains one of the home’s three fireplaces. (Hilton & Hyland)

Moby lightened and brightened the large-scale rooms with high ceilings for a more modern aesthetic. A gently arched ceiling cocoons the living room, which contains one of the home’s three fireplaces. A bank of windows creates a bay on one side of the room.

A corner fireplace sits in the formal dining room, which opens to a deck.

The media/family room has built-ins and a tall tray-type ceiling. The room opens to an outdoor living area with an exterior staircase leading down to a swimming pool and spa. 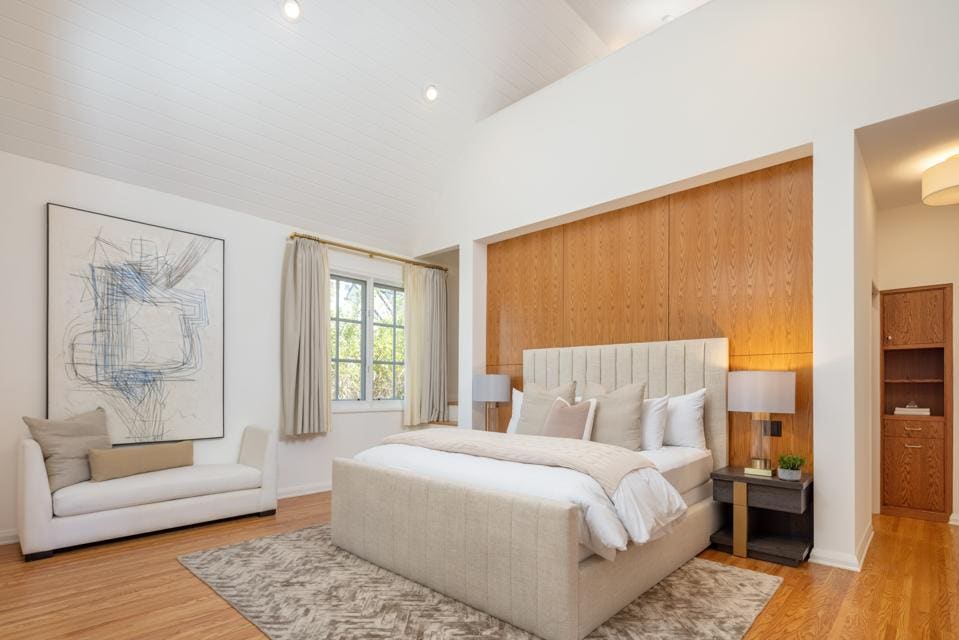 Wood paneling lends a warming note to another bedroom, which has a sitting area. (Hilton & Hyland)

The white eat-in kitchen features a walk-in pantry and a center island with a sink. Another sink sits squarely in front of a bay window. French doors lead outside to a patio.

Upstairs are two primary suites, both with marble bathrooms, vaulted ceilings and extensive closet space. One includes a loft area that can function as a study or yoga studio. Also on this floor are two more bedrooms and a terrace.

The home’s lower level has flex space that can be used for a gym, an office or storage. There’s also a guest suite – with a hidden entrance to a bathroom and steam room – for a total of five bedrooms and eight bathrooms. 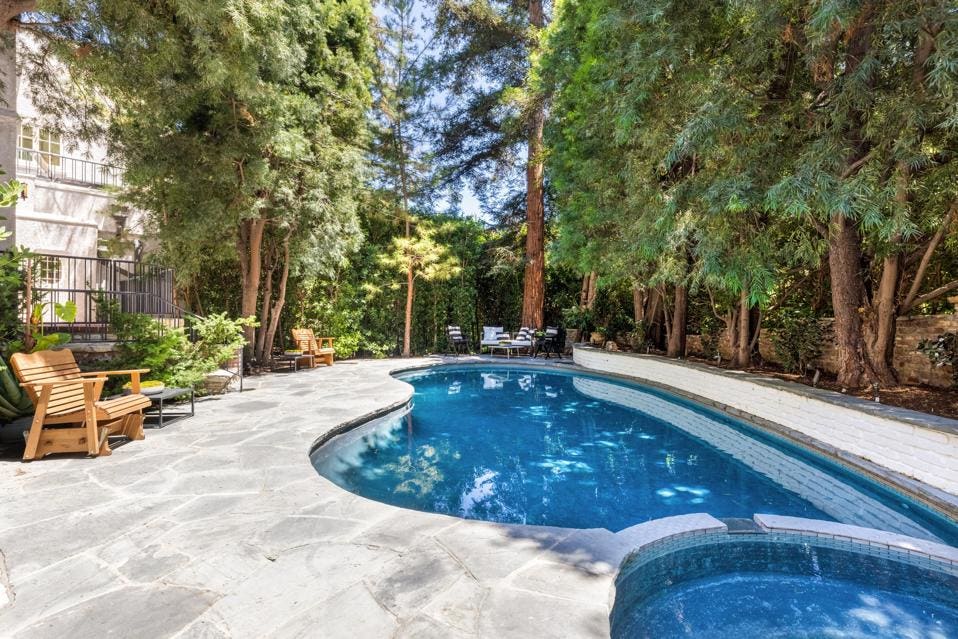 Mature trees shade a swimming pool in the backyard. The corner-lot property is largely insulated from the street thanks to its dense landscaping. (Hilton & Hyland)

Set in the Los Feliz Oaks neighborhood, 5509 Red Oak Drive, Los Angeles, is priced at US $5.75 million.  Brett Lawyer of Hilton & Hyland is the listing agent.

DiCaprio, 46, received his Academy Award for “The Revenant.” The leading man’s credits include “The Wolf of Wall Street,” “Inception,” “The Aviator” and “Titanic,” among others.

This is not the first time DiCaprio has enhanced a home’s celebrity pedigree. In 2014, he bought a Palm Springs Midcentury Modern built for the late singer and TV host Dinah Shore. He also owns a contemporary in Malibu.