Hip Midcentury Home By Harold B. Zook Hits The Market In Los Angeles

If you’re looking for a slice of Palm Springs in Los Angeles, the newly listed Lynch Residence in Studio City checks all the boxes. The midcentury gem was designed and built in 1955 by Harold B. Zook, and remains a stellar example of the architect’s mastery of form that follows function. It’s for sale at $2.6 million, according to a listing with luxury real estate specialist Donovan Healey of Hilton & Hyland. 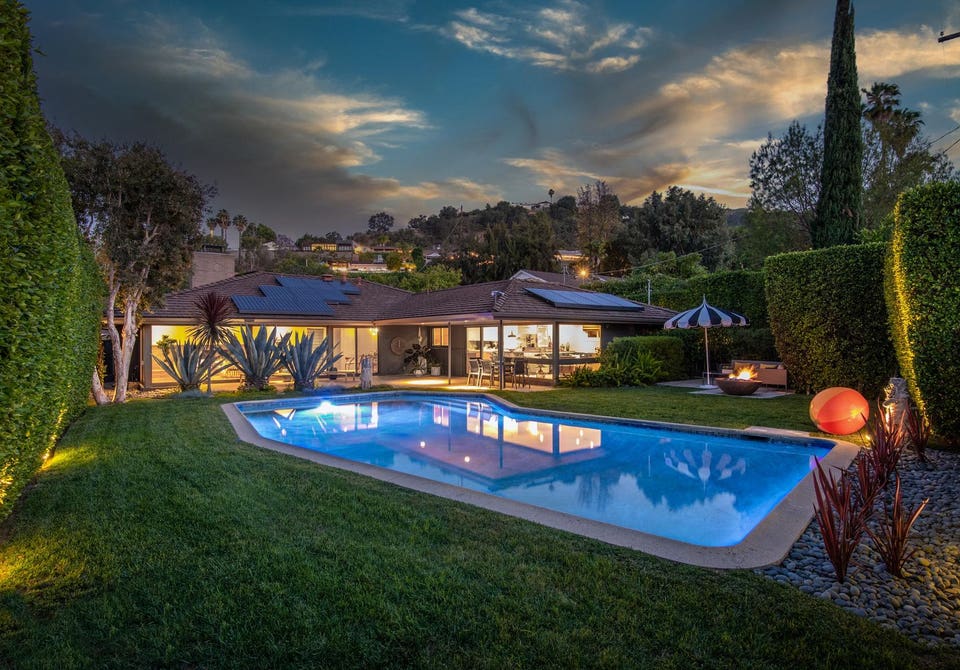 The single-story home at 10881 Willowcrest Place in Studio City is listed for sale at $2.6 million (HILTON & HYLAND).

The son of prominent Chicago architect R. Harold Zook, Harold B. Zook began his career working with celebrated architect Albert Frey, who was a founding father of modernism in Palm Springs. In addition to residential projects (some captured by photography great Julius Shulman), Zook’s works also include the Pasadena’s Saga Motor Hotel and the since-demolished Gwinn’s Drive-In Restaurant. 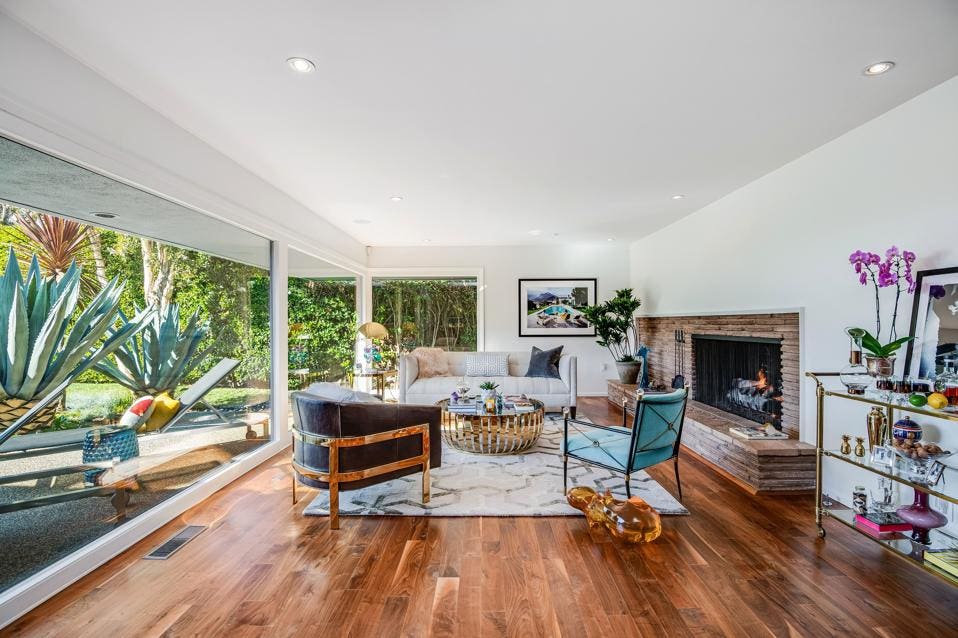 Zook-designed homes are known for their distinctive fireplaces. At 10881 Willowcrest Place, the fireplace brickwork is repeated on the front exterior (HILTON & HYLAND).

According to Healey, over the years, Zook-designed homes have developed a significant following among midcentury enthusiasts and are generally beloved by their owners. Celebrities have also caught the Zook craze; a few years ago, actress Mandy Moore purchased and renovated another of the architect’s homes in Pasadena. 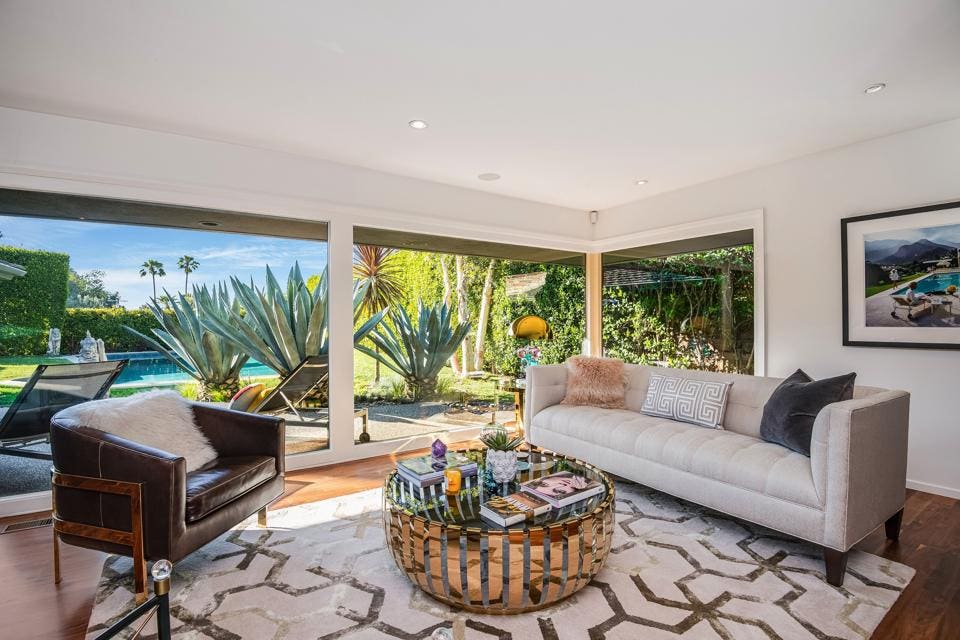 Walls of windows frame views of the swimming pool and landscaping (HILTON & HYLAND).

“Harold B. Zook’s homes are coveted for their classic brick fireplaces, which are a traditional Mid-Century Modern feature. This home has been curated beautifully by the current owners, who are immensely prideful of the property,” Healey says. 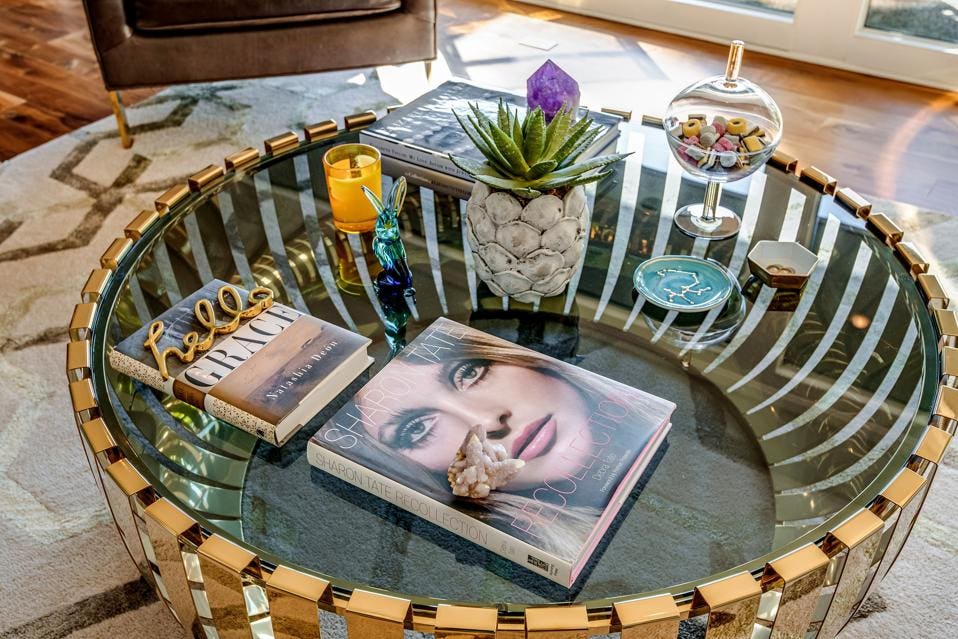 Like many decades-old homes in Los Angeles, the home on Willowcrest has been updated but still retains its character details. Updates include several energy-efficient upgrades including a full-solar panel system and dual-pain, floor-to-ceiling windows and doors. “Preserved with an incredible eye for detail, this home is both period correct and meticulously updated,” the agent says. 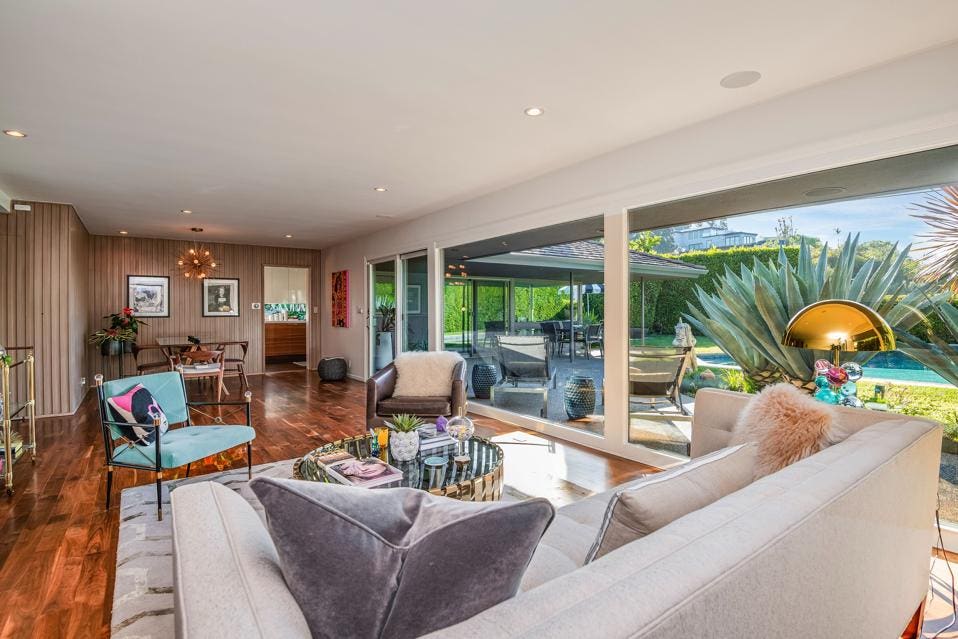 Consider its location on a quiet cul-de-sac, among Mellenthin-designed and other character homes, and it all adds up to being a slice of Mayberry in an urban metropolis, Healey says. “You get the big city feel but you also have lots of space, lots of parking, a cul-de-sac for kids to run around, and a view of Universal Studios in the distance.” 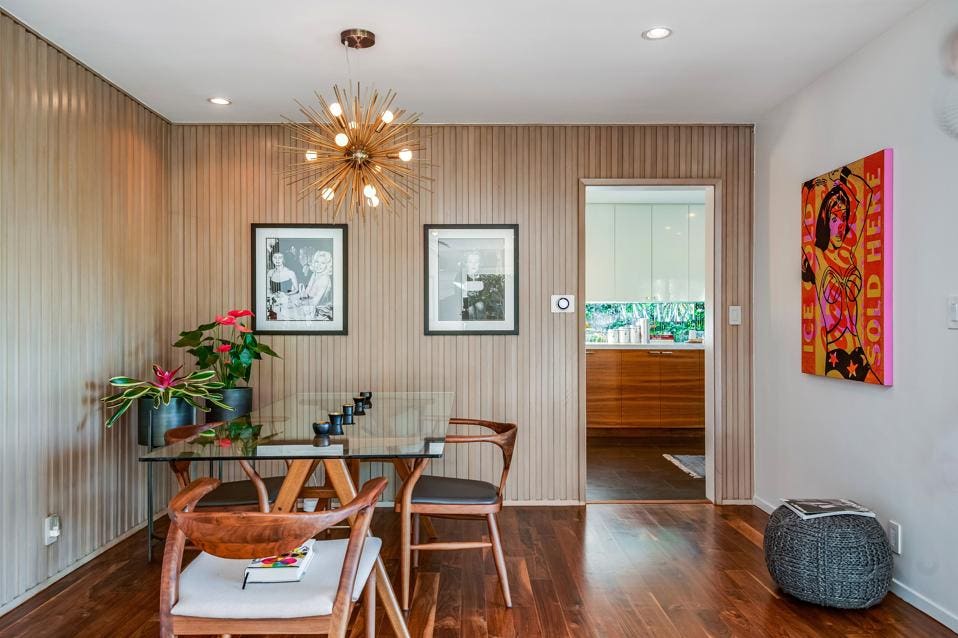 The Los Angeles housing market is currently operating at a record-breaking clip that is showing no signs of slowing down. Last month, The Los Angeles Times reported that Southern California home prices soared to an all-time high median price of $655,000, a 20.2% increase year-over-year. The median home price in Los Angeles County, specifically, now hovers above $750,000. 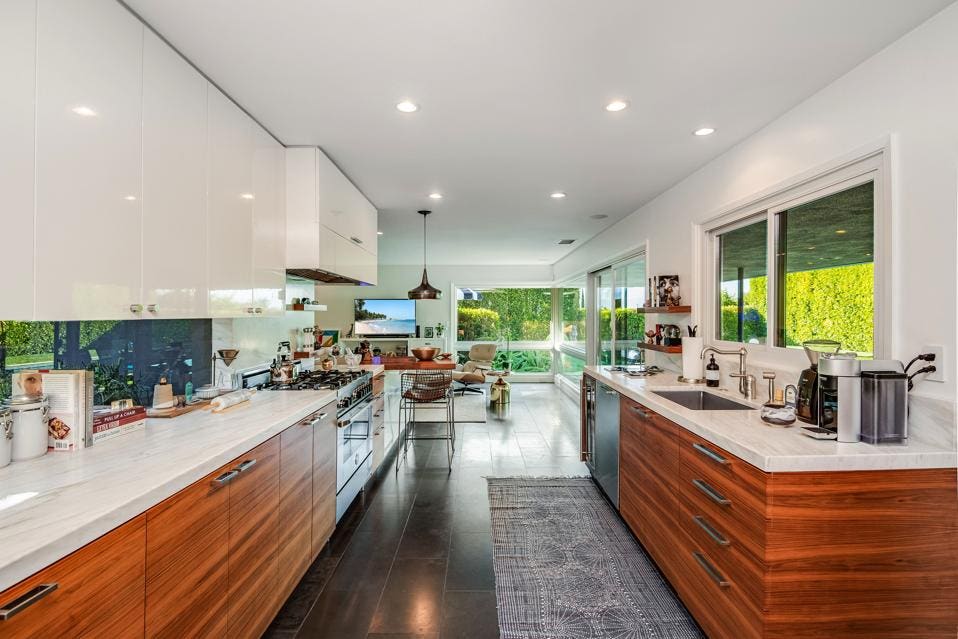 The kitchen has been updated and incorporates period-adjacent fixtures and hardware (HILTON & HYLAND).

Healey says that available inventory has become an epidemic in itself. “There are way more buyers who have decided their home is the most important thing. Now, that’s driving the market. If you’re an agent, the buyers are coming to you,” he explains. 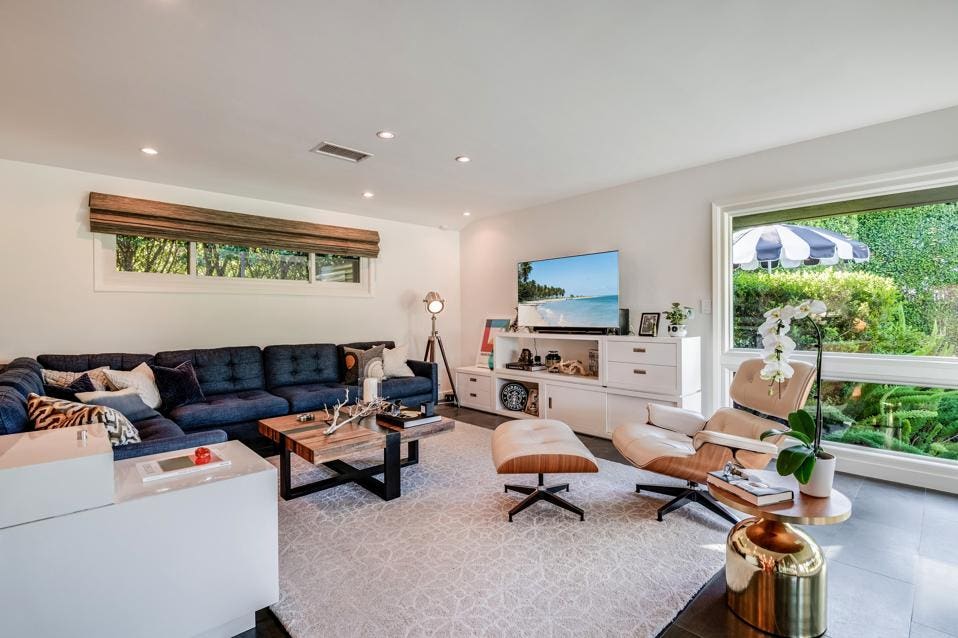 The home has more than 2,000 square feet of space and plenty of flexible living areas (HILTON & HYLAND).

Among the big winners of the current home-buying craze: cash buyers. “Cash buyers are winning bids because, in some markets, the comps (comparable sales) don’t support the bids, making cash buyers even more appealing,” Healey says. 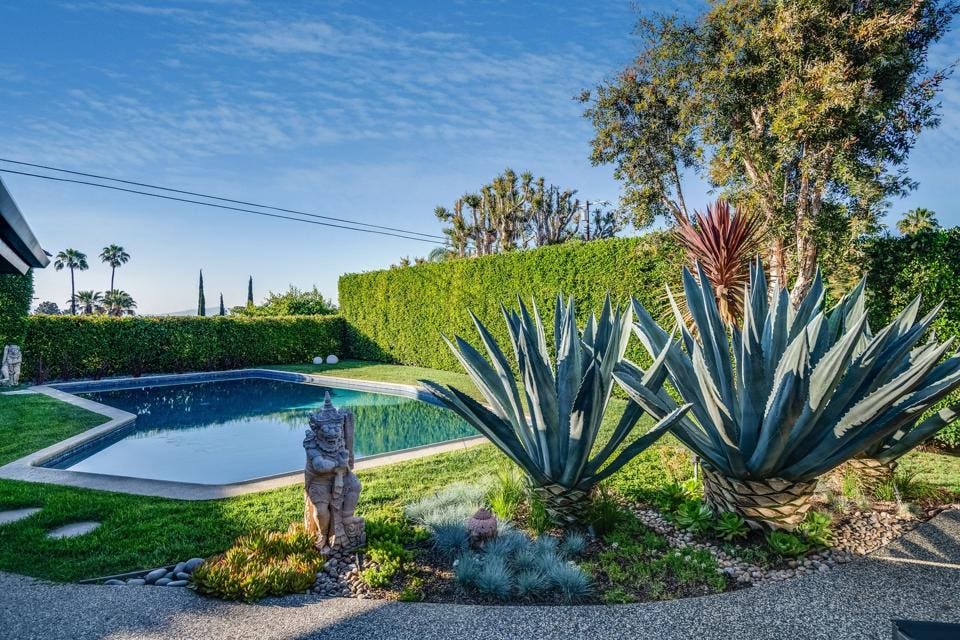 Healey believes the market has become so incredible in some segments that Westside Los Angeles prices, traditionally among the highest in Los Angeles, have started leaking over into the San Fernando Valley. “It’s an incredible time to sell if you have the right representation,” he adds. 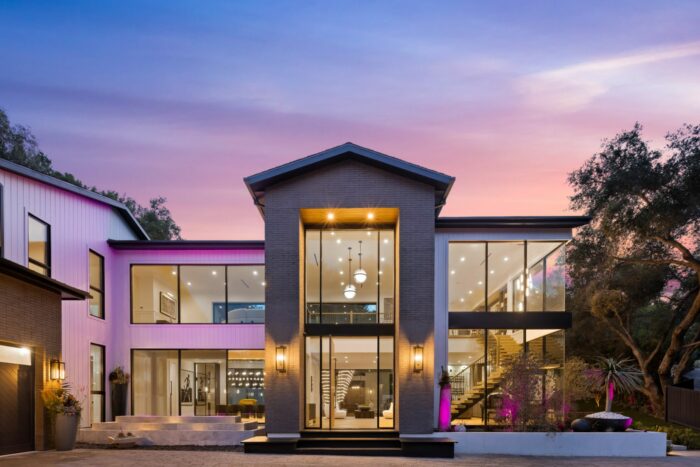