The Cambridge Dictionary defines a museum as “a building where objects of historical, scientific or artistic interest are kept.” While Santa Fe’s Museum Hill may not be an individual building, the streets and structures that make up this cultural hub are certainly a display of rich and expressive history.

Located in Eastside, Santa Fe’s original barrio, Museum Hill sits among some of the oldest streets in Santa Fe, and thus the United States.

Thanks to the city’s historical ordinances, much of the barrio charm and character have remained—small, circuitous lanes are lined with traditional Pueblo architecture structures that almost feel frozen in time. 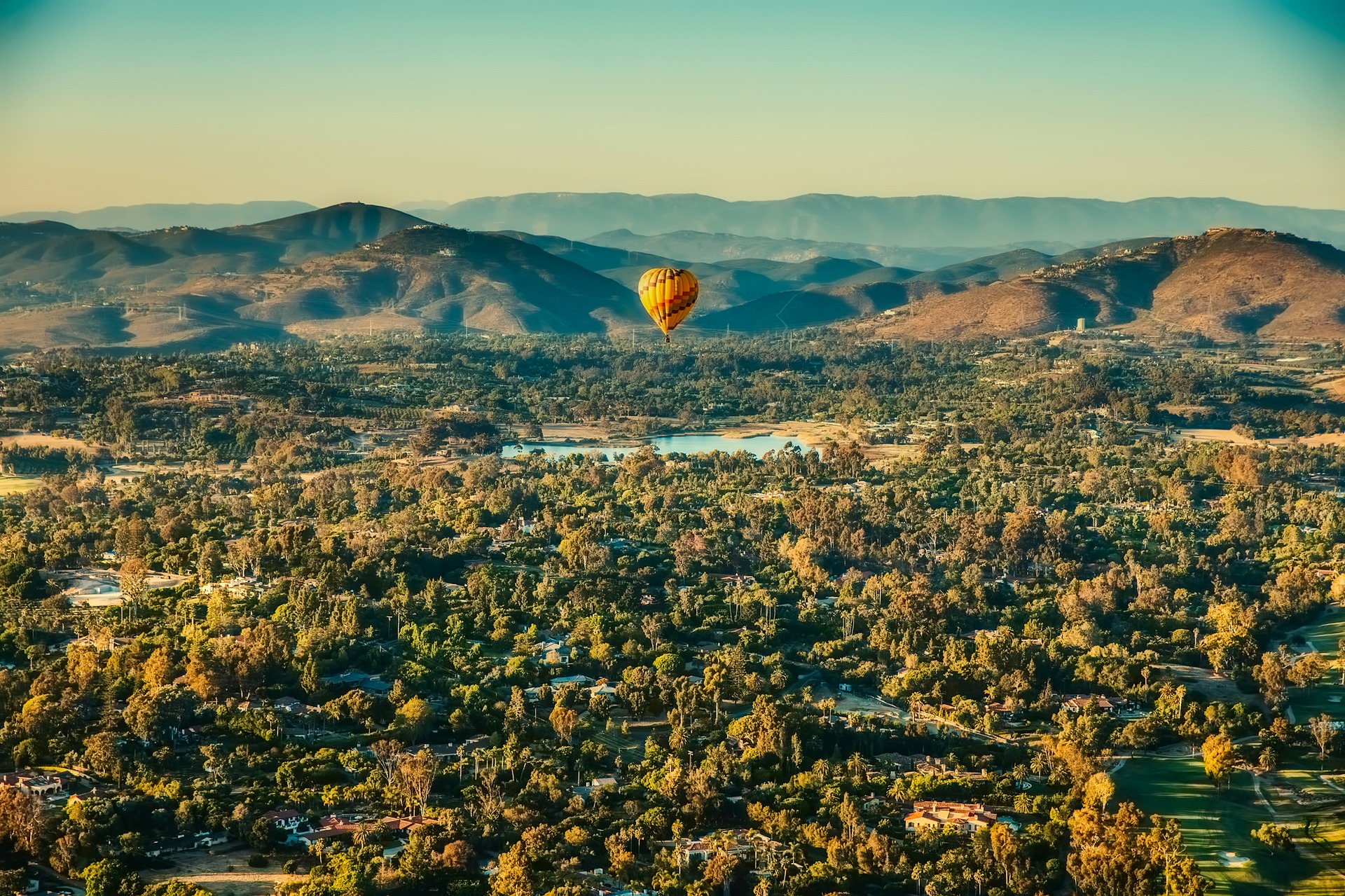 The site of four world class museums and the Botanical Garden in Santa Fe, NM. Located on a hilltop off the Old Santa Fe Trail.

However, an appreciation for the past does not mean that Museum Hill lacks sophistication—many of these historical homes are rich with modern and luxury amenities.

With downtown only a seven-minute drive away, the famous Canyon Road about a mile to the north and the foothills of the Sangre de Christo Mountains directly east, Museum Hill is one of Santa Fe’s most premier locations.

“There’s so much so close by—you get to enjoy all that Santa Fe has to offer,” said David Barker, president of Barker Realty. “But it’s also a residential area, a quiet place where you walk your dog and be free from traffic and commercial activity.” 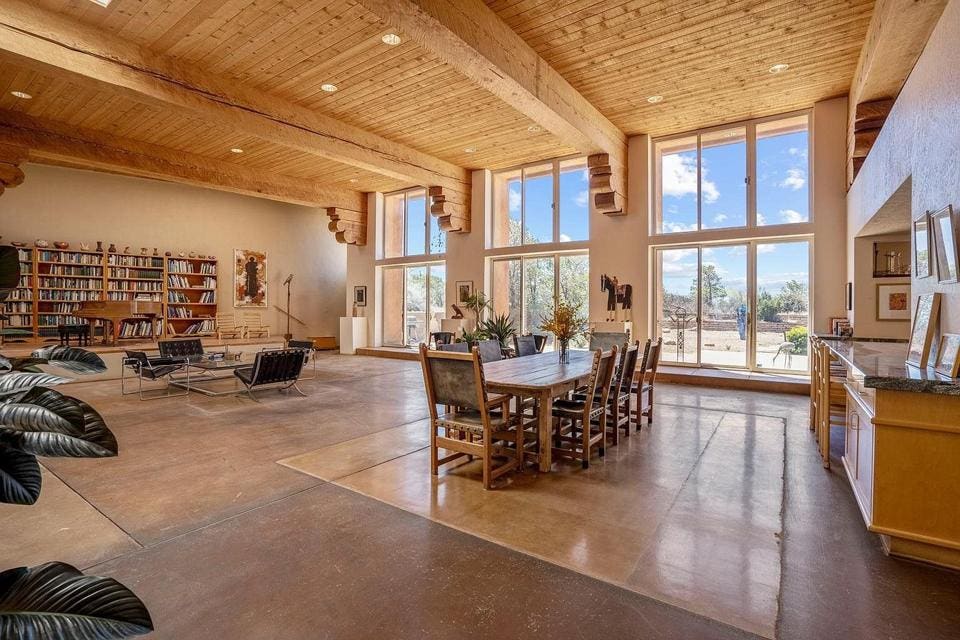 This three-bedroom in the Museum Hill district hit the market in late May for a little over $1 million and was pending sale in about a week. (Barker Realty)

Exploring the homes of Museum Hill

The 1920s saw a resurgence of Pueblo-Spanish and Territorial styles in Santa Fe or what is known now as Pueblo Revival architecture.

Common characteristics of this architectural style, which remains the predominant style of home in Santa Fe, are contoured or irregular adobe walls, flat roofs and stepped massing.

Interiors continue the Pueblo aesthetic with vigas, latillas and plaster finishes but are often fitted with modern amenities such as spa bathrooms, smart-home features and open floor plans. 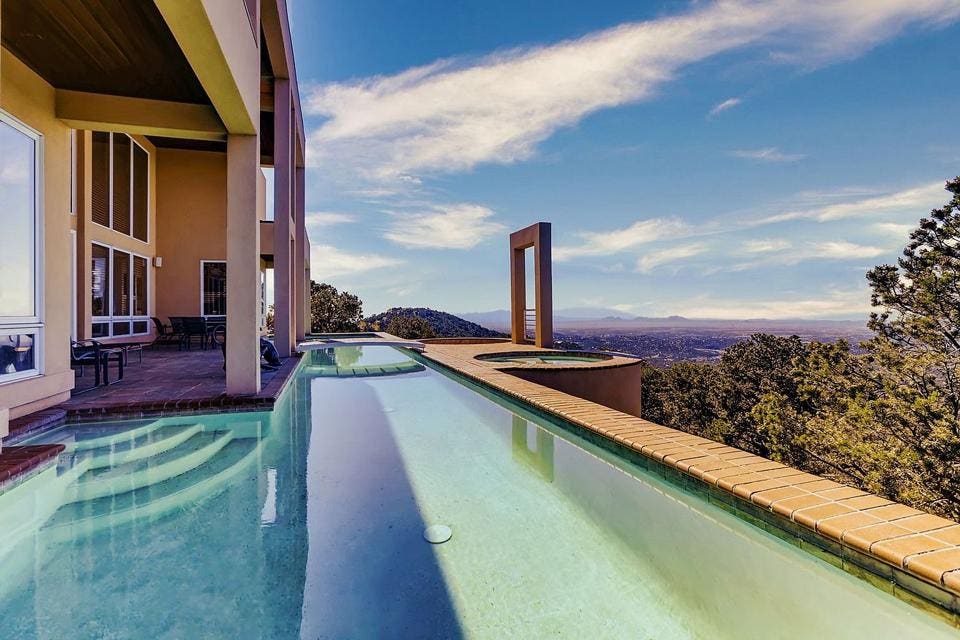 Buyers can expect to find properties with lots of acreage, swimming pools and guest houses in Museum Hill. This sky-high compound located four miles south of the district is listed for $5.7 million. (Barker Realty)

The median price of homes in Santa Fe County has soared in a matter of a couple of years. According to the Santa Fe Association of Realtors, the median price as of the first quarter for 2021 was $560,000. That’s a 55% increase from just five years ago when prices were around $360,000.

As one of the more premier locations in Santa Fe, Museum Hill’s median price is almost double that of the U.S.

“Million dollar properties make up the lower price points for the luxury market,” said Barker, “and then higher prices are at about six or seven million.”

For these higher prices, buyers can expect lots of acreage and homes that feature swimming pools, guest quarters and spectacular views. 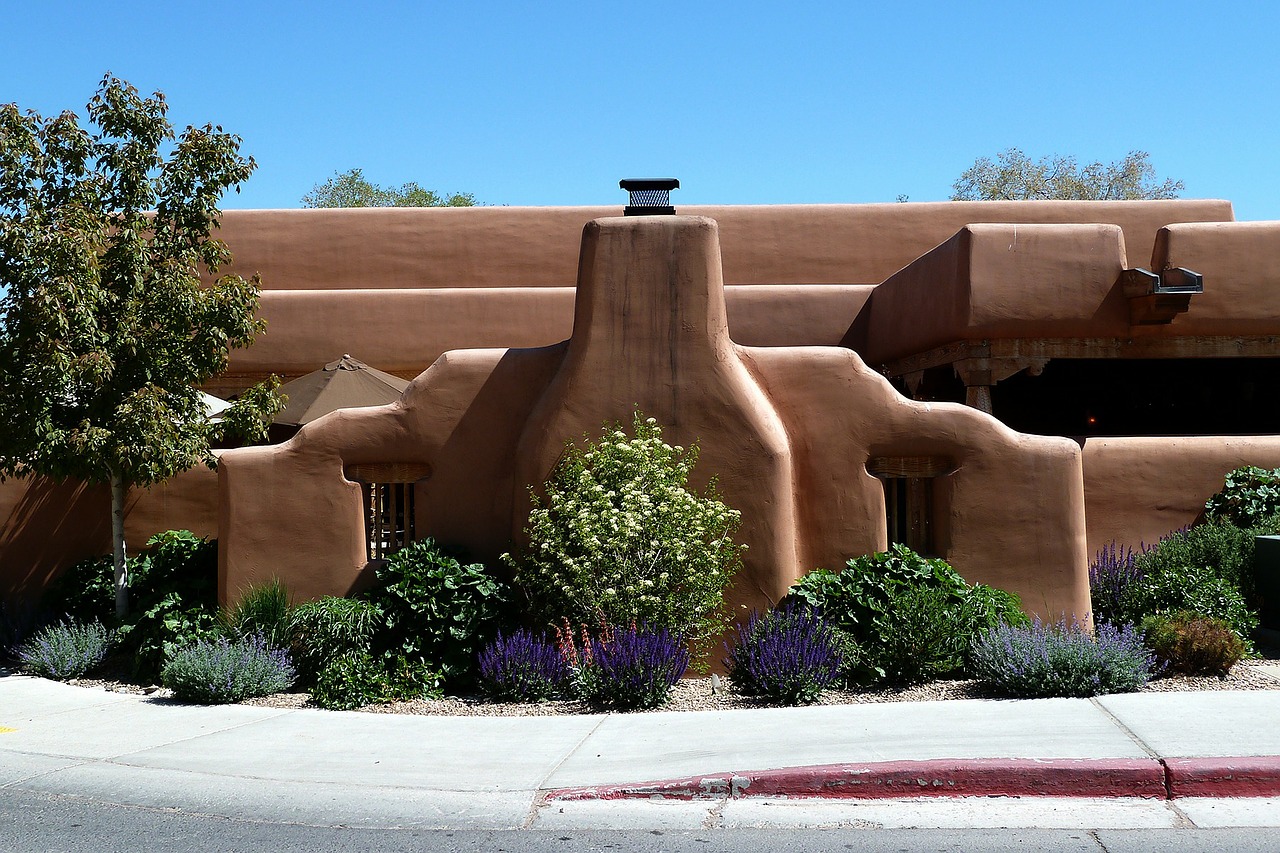 The 1920s saw a resurgence of Pueblo-Spanish and Territorial styles in Santa Fe or what is known now as Pueblo Revival architecture.

Exploring the vibe in Museum Hill

Aptly named, Museum Hill is home to four world-class museums, including the Museum of Spanish Colonial Art and the Wheelwright Museum of the American Indian.

In addition to cultural offerings, Museum Hill is also located by some of the best hiking trails in Santa Fe that range from leisurely to advanced and opportunities for renowned mountain biking.

While the area is mostly free of commercial activity, nearby Canyon Road and downtown have an abundance of dining, shopping, and nightlife options. 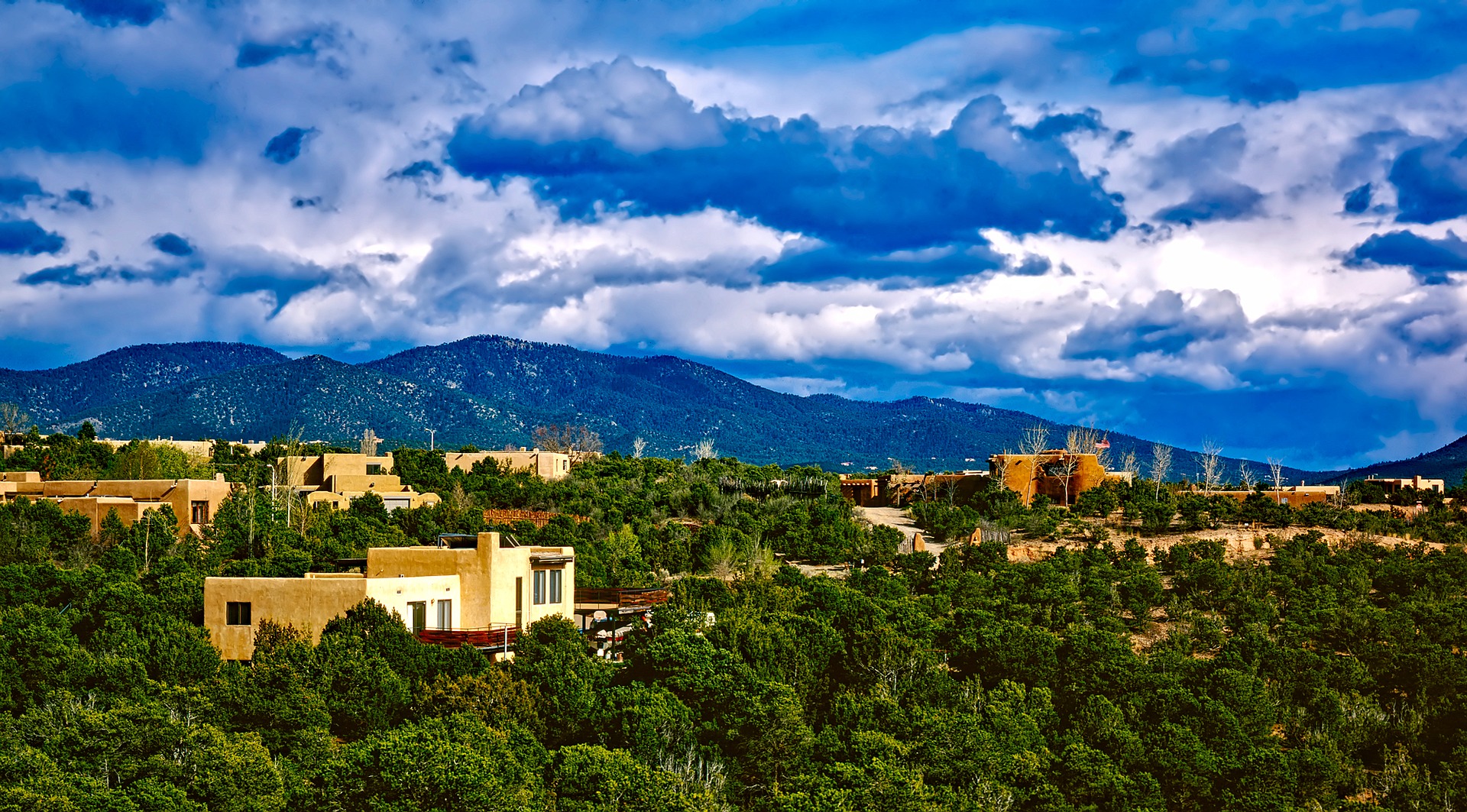 As one of the more premier locations in Santa Fe, Museum Hill’s median price is almost double that of the U.S.

Exploring the schools of Museum Hill

There are 24 public schools throughout Santa Fe, only one of which, Atalaya Elementary, is located in the Museum Hill area.

Students living in Museum Hill and attending public school are assigned to Santa Fe High School, which serves about 1,500 students.

Private schools include Santa Fe Prep and Rio Grande School. Santa Fe Prep, founded in 1961, has an enrollment of about 350 students and is known for its beautiful 33-acre campus as well as its award-winning library.

Sitting by the foothills of Atalaya Mountain is the 250-acre campus of St. John’s College Santa Fe. 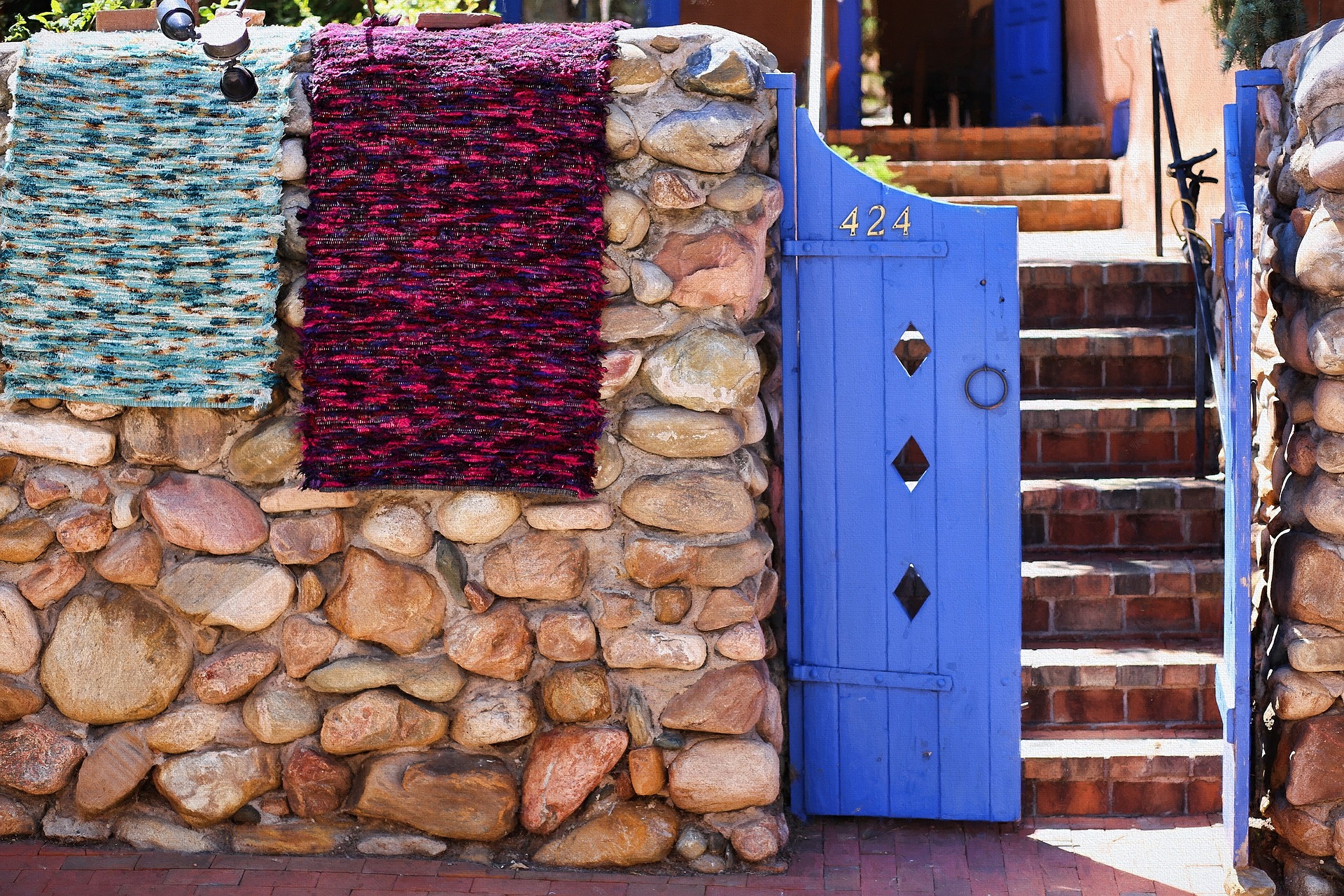 Aptly named, Museum Hill is home to four world-class museums, including the Museum of Spanish Colonial Art and the Wheelwright Museum of the American Indian.

Exploring the surroundings of Museum Hill

An hour’s drive to the south is Albuquerque and just over a hundred miles to the north is the Colorado border.

The Santa Fe Regional Airport is a twenty-minute drive away and offers flights to major surrounding cities like Denver, Dallas and Phoenix.