A one-of-a-kind ski-in/ski-out home built from salvaged shipping containers has hit the market in the Tahoe-Truckee area for $3.295 million.

Set among tall pines in the Mountainside at Northstar community, the steel-clad mountain retreat, with its corrugated metal frame, was built for its current owners using a series of repurposed containers. The connected containers form a sleek shell for the custom home, which sits close by to some of the most popular ski slopes in the area.

Anchored atop concrete and steel beams, the container home’s cantilevered design creates more than 2,400 square feet of outdoor living space. A 1,340-square-foot deck extends from the rear and is accessible from the kitchen and common areas. Carved out below the house is a cedar-clad lounge complete with a covered dining patio, gas firepit and a Hotsprings Grandee hot tub. 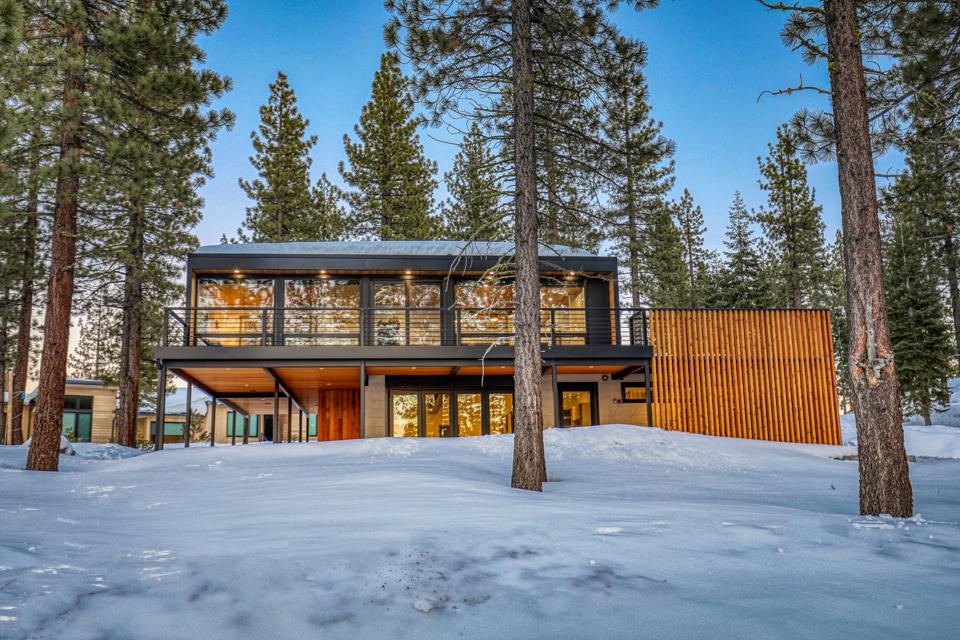 Listing agent Michael Montalbano of Tahoe Mountain Realty said that when it came to finding the perfect spot to build the container house, he asked the owners a simple question: Would you rather drive to play golf in the summer or drive to skiing in the winter?

“It was like the ‘aha!’ moment for them, where they realized they didn’t want to drive to skiing and deal with walking in ski boots,” Montalbano said.

The question also helped the luxury real estate specialist narrow down the options for finding the perfect lot to build on. Unlike resort ski communities such as Vail in Colorado and Big Sky in Montana, the presence of ski-in/ski-out communities around Tahoe is limited to just a handful.

“Part of it is the geography and how the land is owned, part of it is limited to what can be developed,” he explained. “In Tahoe, it’s very unique to be able to start the day with your skis pointing downhill.”

The owners ultimately settled on a pair of side-by-side lots in Mountainside at Northstar’s M25 enclave. The M25 neighborhood consists of 25 coveted ski-in/ski-out custom lots ranging from half an acre to 1.5 acres.

“For single-family homes in Northstar, there are only 25 opportunities to build a true ski-in/ski-out property,” Montalbano said. 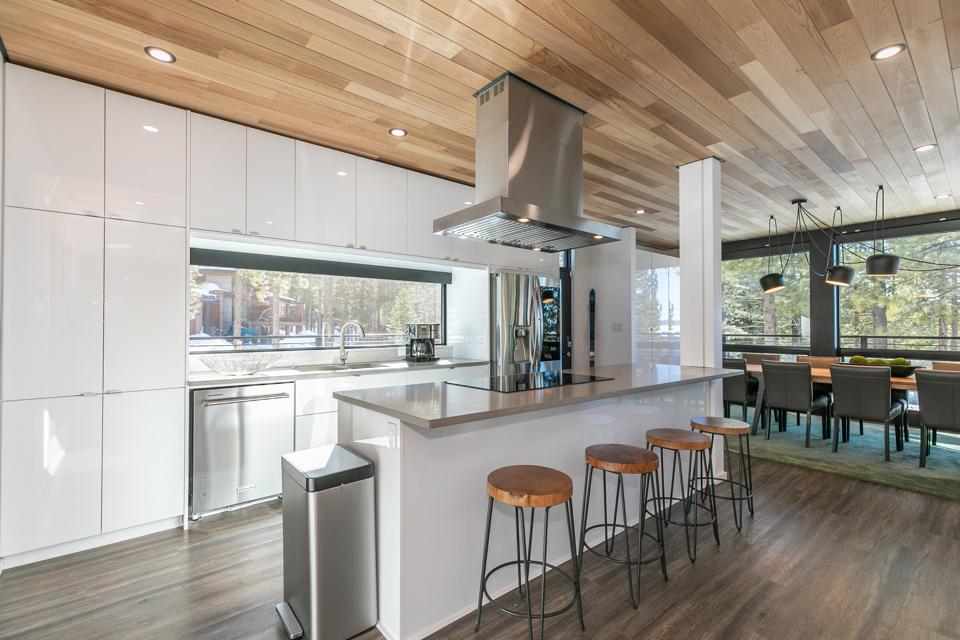 Inside, the container house has a contemporary vibe with a gleaming chef’s kitchen and cedar-lined ceilings. (Tahoe Mountain Realty)

Whereas other parts of California see construction year-round, new development projects in Tahoe are limited to a small window due to the weather. According to Montalbano, it’s because of the restraints that the area is seeing an increase in modular, prefabricated developments—homes assembled in sections off-site and later configured on location—similar to the container house.

“The whole idea behind modular prefabs is saving time,” Montalbano said. “In an area like Tahoe, where you’re constrained during the building season by weather, time is everything.”

With the container house, architect Dave Spear of Tahoe-based Mountain Concepts was enlisted to give the project depth and styling beyond the linear box-like look, Montalbano said. The repurposed shipping containers were retrofitted off-site and delivered in segments to the mid-mountain site by truck. From there, the segments were pieced together by crane atop a pad of board-formed concrete.

“With the crane, the home is kind of Lego’d together and then they finished the onsite components to it,” he said. 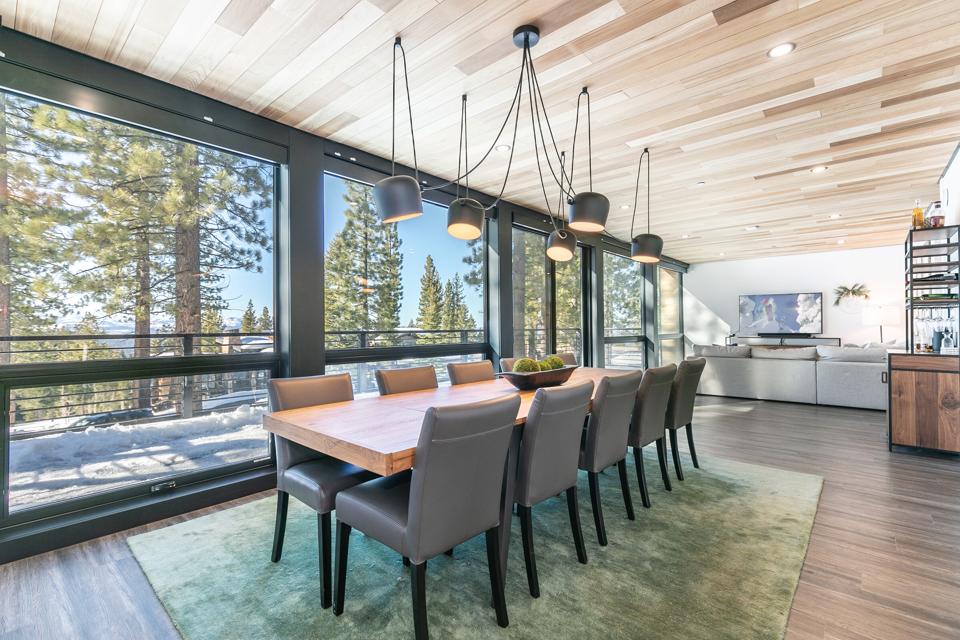 Because of the time-saving benefits, in addition to improvements in quality and concept, modular projects have increased in recent years. The Palisades at Squaw Valley and Village Walk Skyline in Tahoe are two examples of where the modular concept has been utilized to great success. Other one-off modular projects are underway in Tahoe’s Martis Camp area.

Montalbano expects the trend to continue.

“We’re seeing more and more modular development, without a doubt,” he said. “There was a preconception of modular being an inferior, cheap quality, and now the quality is quite good. We’re definitely seeing a shift towards prefab projects.”

To say the Tahoe-Truckee housing market is hot right now would be an understatement—in fact, it’s scorching.

The area just capped off its most prolific year in terms of residential sales volume with a record $2.7 billion in total dollar volume in 2020 (up 70% from the previous year), while total residential transactions (2,350) increased 33% from the last high set in 2017. And already in 2021, the pace has been as intense if not greater, according to Montalbano.

“We have not seen any regression, and we just wrapped up the most prolific first quarter in Tahoe history,” he said. 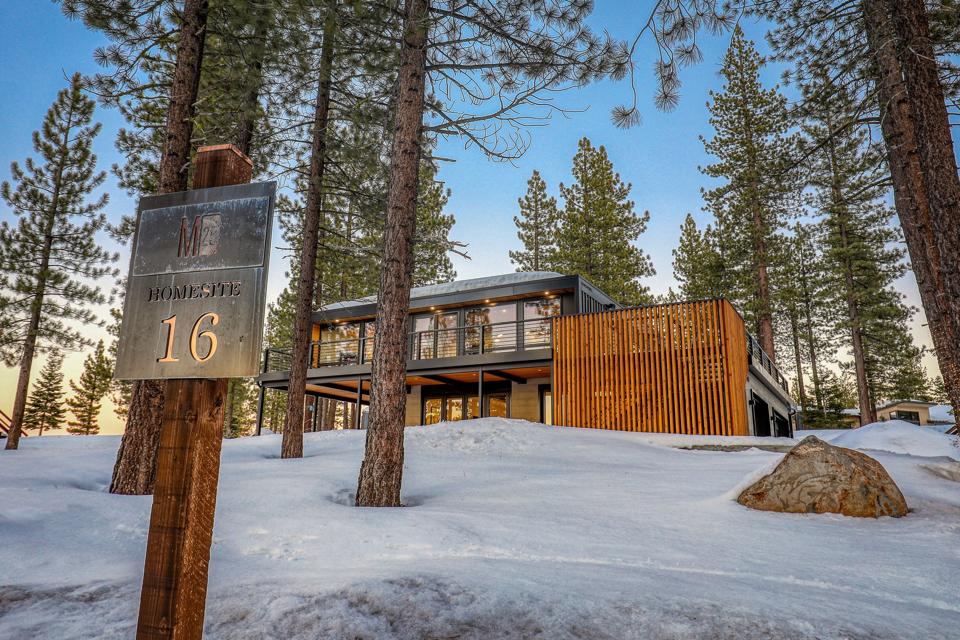 Because of its location mid-mountain, the container house is one of the true ski-in/ski-out homes in the Tahoe-Truckee area. (Tahoe Mountain Realty)

Montalbano estimates Tahoe-Truckee’s total volume in Q1 2021 at about $606 million, which is about four times the production in a normal market. “The average price is way up—a roughly 77% uptick from the same period—and the total number of sales was up 37% when compared with the same period,” he added.

The biggest constraint in the market continues to be the inventory side, Montalbano said. However, the real estate agent is cautiously optimistic that there will be enough properties to sell to maintain the market’s current record-setting pace.

“If no new properties come, then you’re not going to set records for transaction volume and properties trading,” he said. “ But enough of a trickle of new properties are coming to support the robust metrics.” 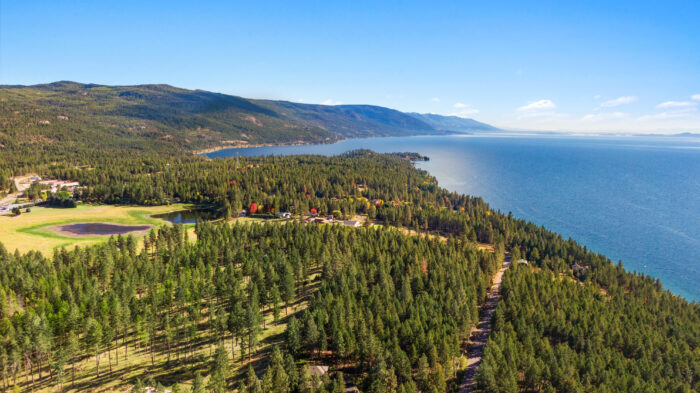