The transaction establishes a new record for the state of California. It is the second-most expensive home ever sold in the United States, trailing only billionaire Ken Griffin’s approximately $238 million purchase of a New York City penthouse in 2019. 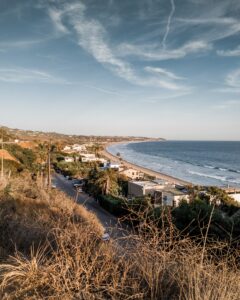 The previous record for the most expensive home ever sold in California was $165 million, the amount Jeff Bezos paid for the Warner Estate in Beverly Hills.

Previously, the state’s most expensive acquisition was established by Amazon founder Jeff Bezos, who paid $165 million for the Warner Estate from media magnate David Geffen last year, according to reports.

The beach estate, which is located in Malibu’s Paradise Cove neighborhood, is around seven acres in size and is divided into two lots. Records show that the property was previously owned by a trust associated with Hollywood producer Jerry Weintraub. According to public documents, Mr. Azria and his wife, Florence Azria, purchased it in 2013 for $41 million.

Hedged and fenced from the street, the sprawling property includes several guesthouses, guard buildings, a swimming pool and formal gardens. The main house was designed by Scott Mitchell and extends out towards the ocean to maximize the views. Some 10,000 square feet of living space includes a private home theater and a spa.

Azria, the designer behind the brands Joie, Equipment, and Current/Elliott, sold his company, Dutch LLC, to a private equity firm in 2012. He is the late Max Azria’s brother and co-founder of the BCBG Max Azria Group.

Andreessen is a venture capitalist and software engineer who co-founded Andreessen Horowitz in 2009 and co-created Mosaic, one of the original online browsers. According to Forbes, Andreesen’s estimated net worth is $1.6 billion.