An $11.5 Million Gem Surfaces For Sale Among Florida’s Barrier Islands

Florida’s Barrier Islands have a wealth of attributes – waterfront, abundant views and a tropical paradise vibe. 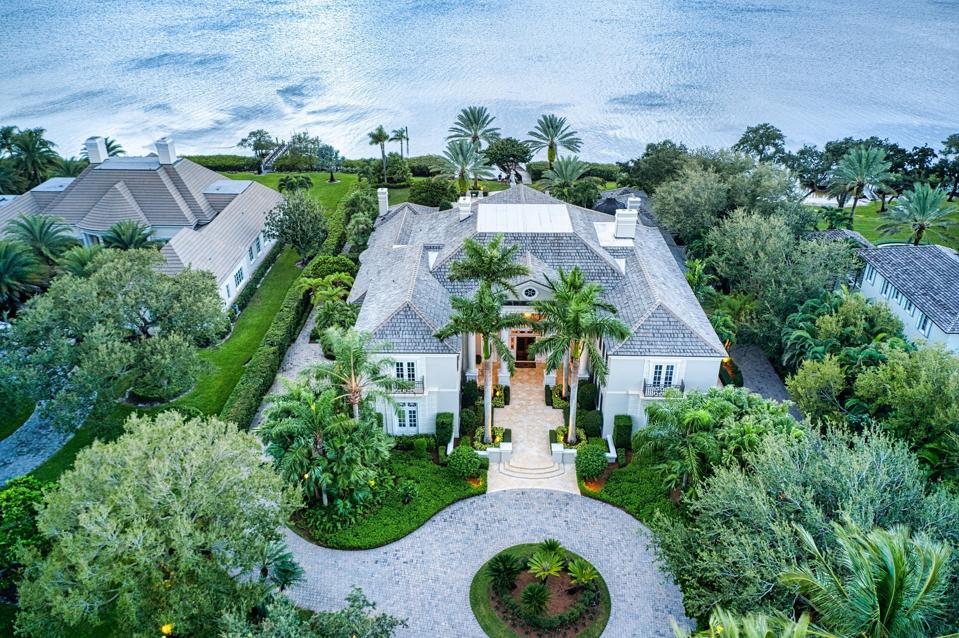 The 11,758-square-foot home lies on the 1,650-acre John’s Island, a waterway envisioned half a century ago as an exclusive family-oriented enclave. (Dale Sorensen Real Estate)

The 1,650-acre John’s Island, set between the Atlantic Ocean and the waterway, was envisioned half a century ago as an exclusive family-oriented enclave. Today, it’s a tranquil retreat – complete with member-only clubs, championship golf courses and three miles of white sand beach – just north of the vibrant resort town of Vero Beach.

Bridge-accessed Gem Island is made up of custom luxury homes set on large lots and surrounded by lush landscaping and water. The 79-acre island measures about one mile long and one and a half miles wide. 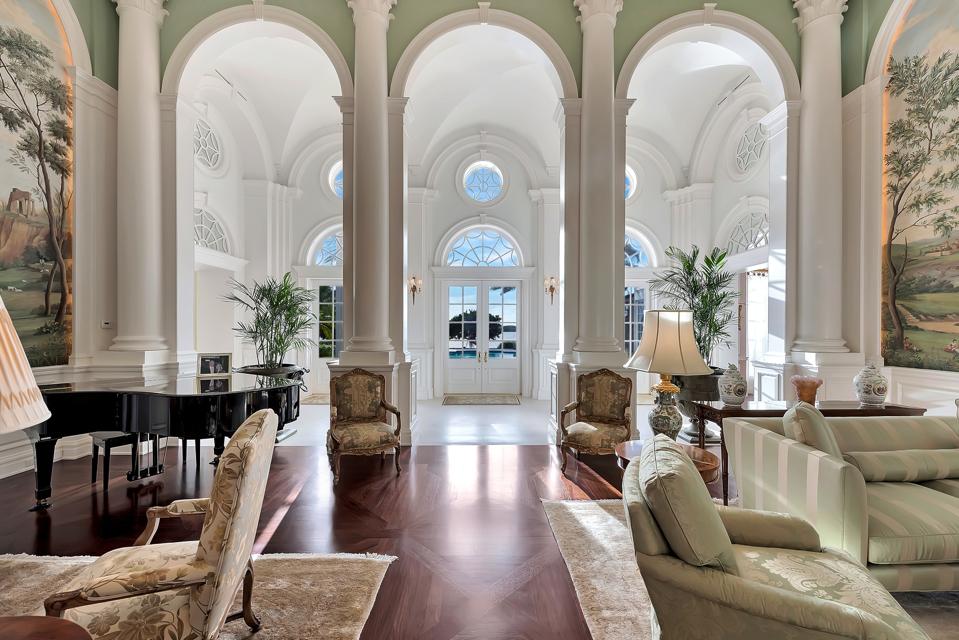 Set on 1.4 acres, the 11,758-square-foot mansion is a study in symmetry and proportion. A paver-covered circular driveway leads to a wide palm tree-lined walkway and the home’s entrance. Two pairs of columns support a broad portico flanking the double doors. 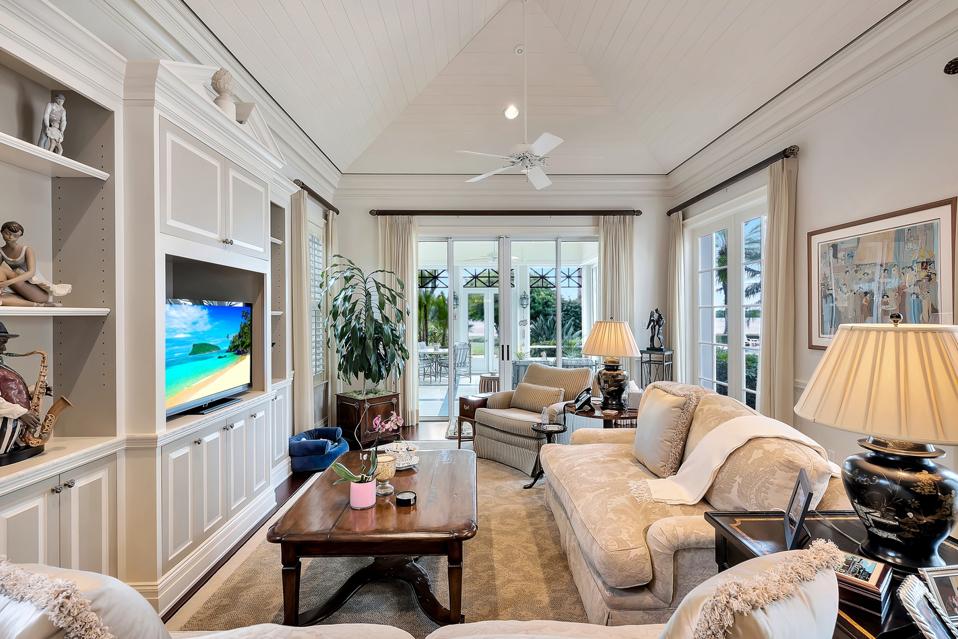 The stateroom opens to a wall of arched windows and doors, set beneath an arched ceiling, that leads outside to the swimming pool and cabana. An enclosed veranda overlooking the pool has a barbecue and a fireplace. Floor-to-ceiling windows frame the grounds and take in views of the Indian River.

The media room/library is lined in mahogany paneling. Gold leaf adorns the coffered ceiling. A wet bar equipped with wine storage and a cooler sits nearby. 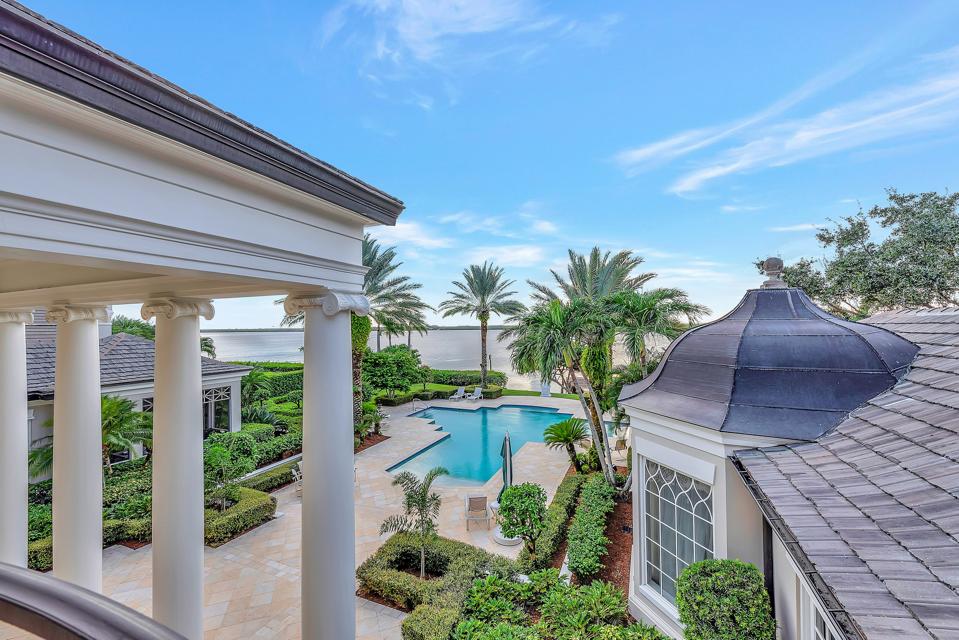 The master wing contains dual bathrooms, two massive walk-in closets and a fitness studio. A sweeping wrought-iron stairway and an elevator access the second floor, which has a guest area and bedroom suites. There are a total of five bedrooms, eight full bathrooms and three powder rooms. 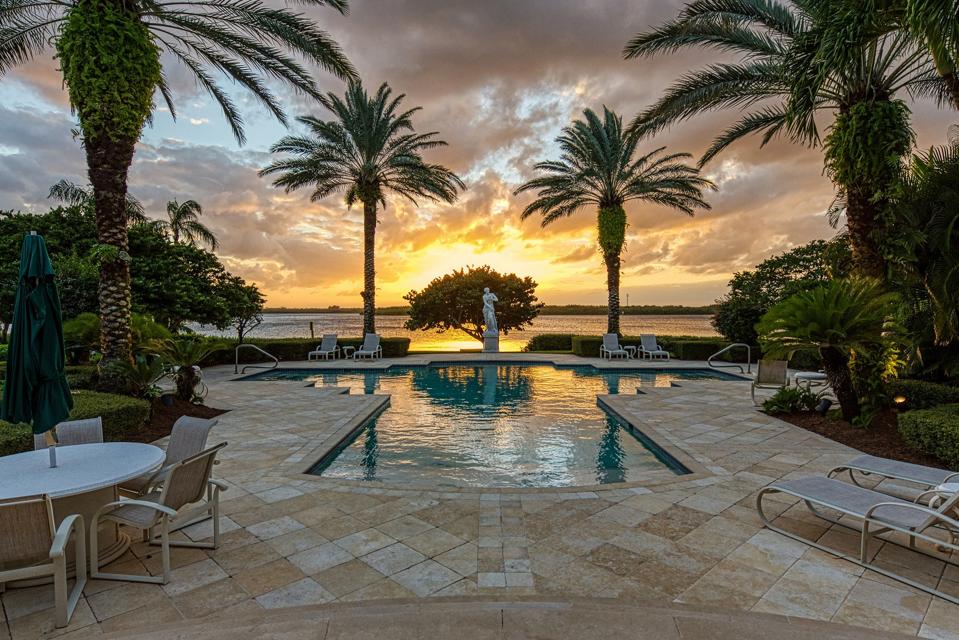 The swimming pool is oriented towards the waterway. (Dale Sorensen Real Estate)

The two air-conditioned garages can accommodate up to four vehicles.

Lawn and hedges separate the resort-style pool area from the waterfront, where a wooden jetty juts out into the river. In another nod to symmetry, four large palm trees on the waterside of the house mirror those at the entrance.

The cost of this island getaway is $11.5 million. Matilde Sorensen of Dale Sorensen Real Estate is the listing agent.