Sydney Australia’s Eastern Suburbs—located east of Sydney and extending to the coast—continue to attract interest from buyers worldwide, with an increasing segment coming from the United States.

Once Australia’s strict travel restrictions (currently a 10-day compulsory hotel quarantine when entering Australia) are relaxed Ken Jacobs of Sydney-based Private Property Global expects a boom in sales. “Over the last year, we have been getting lots of inquiries from high-net-worth Americans. Once they can, I expect to see serious buyers flying over to look and buy,” predicts Jacobs, who previously handled the country’s three top-dollar residential sales. 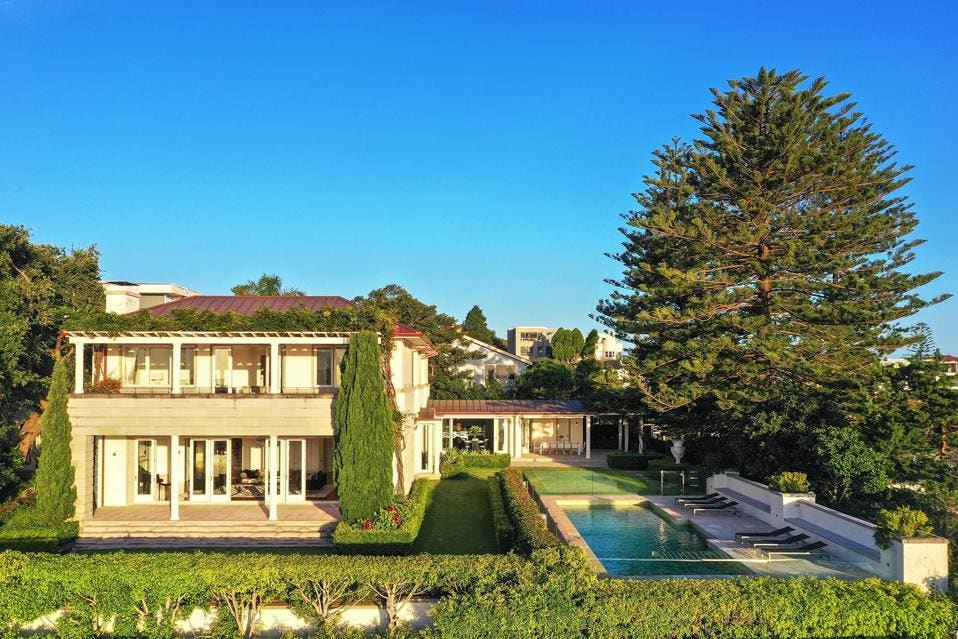 The quiet life in the big city, Sydney’s Eastern Suburbs are coveted for their large lots and low-key, suburban neighborhoods (PRIVATE PROPERTY GLOBAL).

“You need to treat the Eastern Sydney suburbs almost as a different country from Sydney. For years trophy sales there were undervalued,” explains Jacobs. “Compare a $10 million (AUD) trophy sale with a $10 million home in Beverly Hills, and you could see the difference,” Jacobs said. “Now prices have escalated in the Eastern Suburbs for prestige properties.” 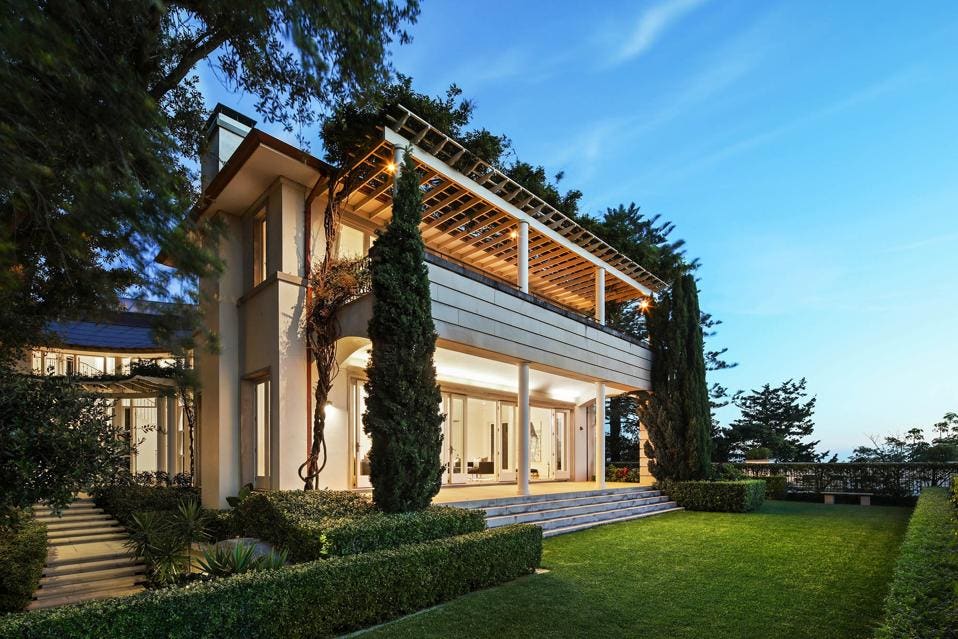 This hillside estate in Vaucluse, listed for AUD 41 million (USD $32 million), is on par with the same standard of luxury home you would find in global hotspots such as Beverly Hills (PRIVATE PROPERTY GLOBAL). 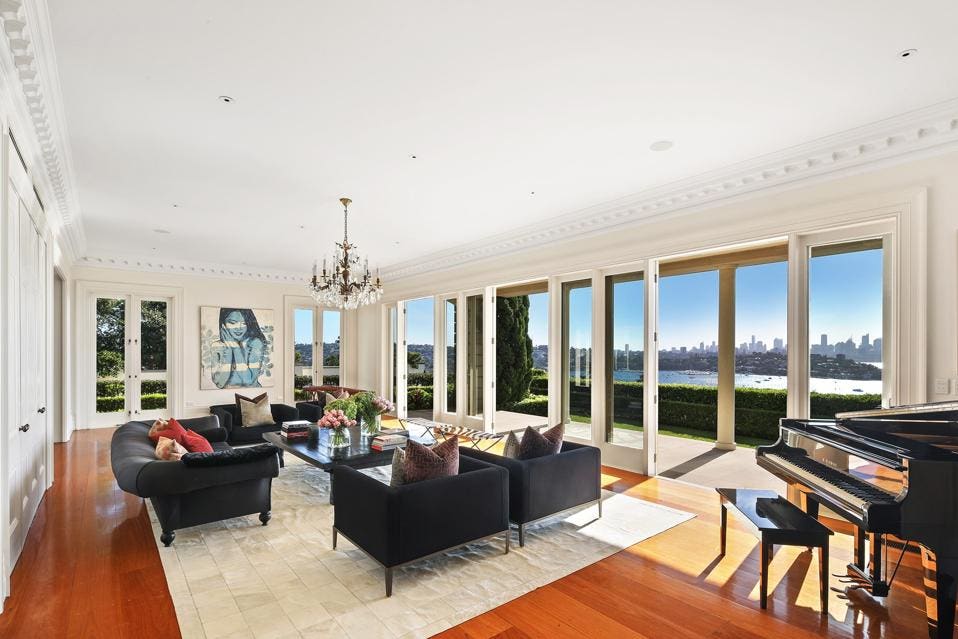 The Eastern suburbs are located east of Sydney and extending to the coast, which often makes for spectacular views like the ones seen at 7 Hillside Avenue in Vaucluse (PRIVATE PROPERTY GLOBAL).

Jacobs provides an insider’s perspective on the current market. “There is a shortage of stock here. Owners are scared to sell, thinking they may not find somewhere else they like and can buy.” The picture painted mirrors many of the hot markets currently seen in the U.S. 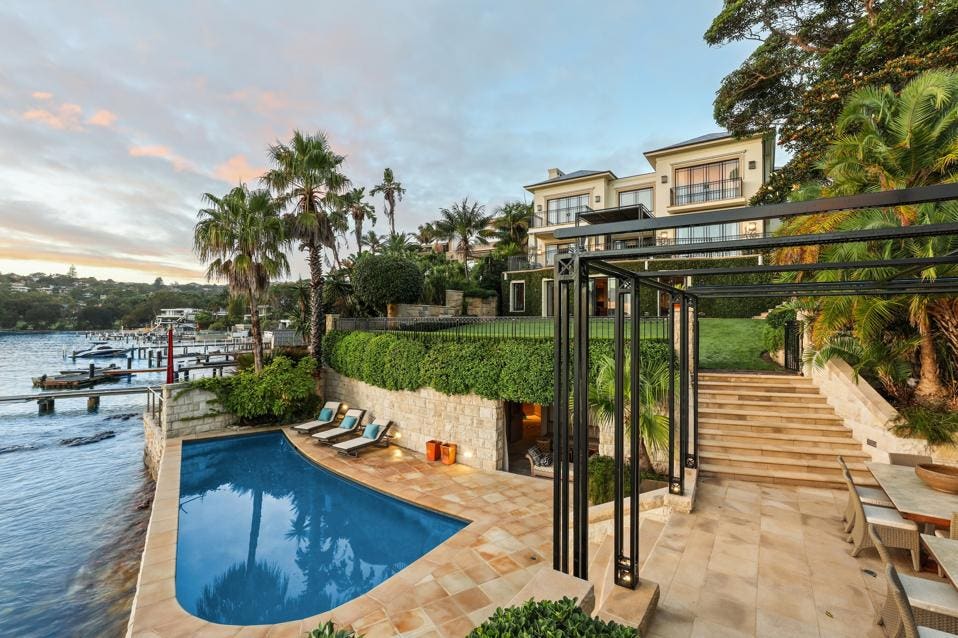 Properties near or on the coast, particularly those with water access and dockage, often command a premium in the Syndey’s Eastern Suburbs (PRIVATE PROPERTY GLOBAL).

These days, blue-chip properties are hard to find in the Eastern Suburbs. One current listing is a hillside estate in Vaucluse. The listing price at AUD 41 million (USD $31,991,286) is on par with Beverly Hills. The seven-bedroom, 7.5 bath property has 360-degree views of Sydney’s Harbour. It boasts a ten-car garage, a wine cellar and a guest house. 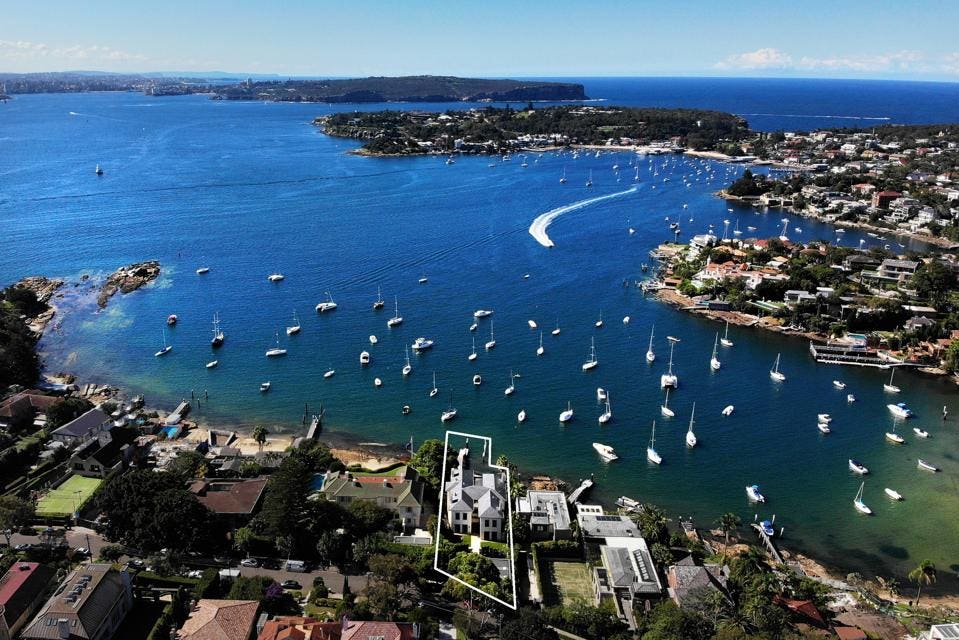 One side of the Eastern suburbs is the ocean and on the other side is the Harbour. The lack of land for new development is keeping prices strong there. “At the top end of the market, there are unique trophy properties with buyers who are the right fit at the right price. Some are sold off-market while others can linger until the right buyer profile appears,” Jacobs explains. 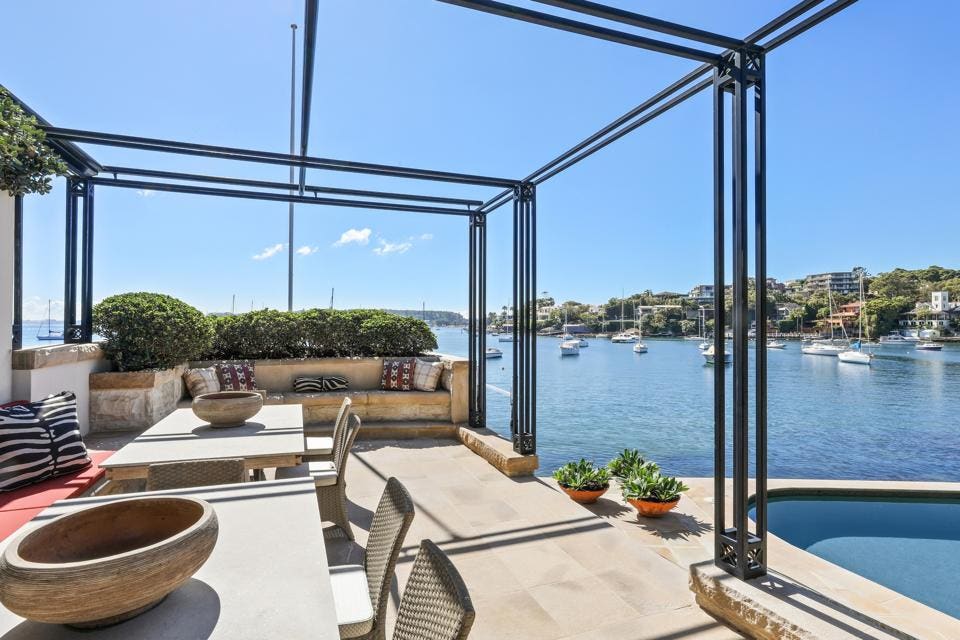 A harbor-adjacent dining patio and spa are among perks of properties on the water (PRIVATE PROPERTY GLOBAL).

Another current listing in Vaucluse that speaks to high-net-worth U.S. buyers is on the market for AUD 55 million (USD $41,523,350) This waterfront estate on Coolong Road has unobstructed northerly harbor views and world-class boating facilities. Coolong Road is considered one of Sydney’s premier addresses. This is a boater’s paradise with a private jetty, slipway, boathouse, deepwater mooring, barbecue pavilion, and heated saltwater pool on the water’s edge. 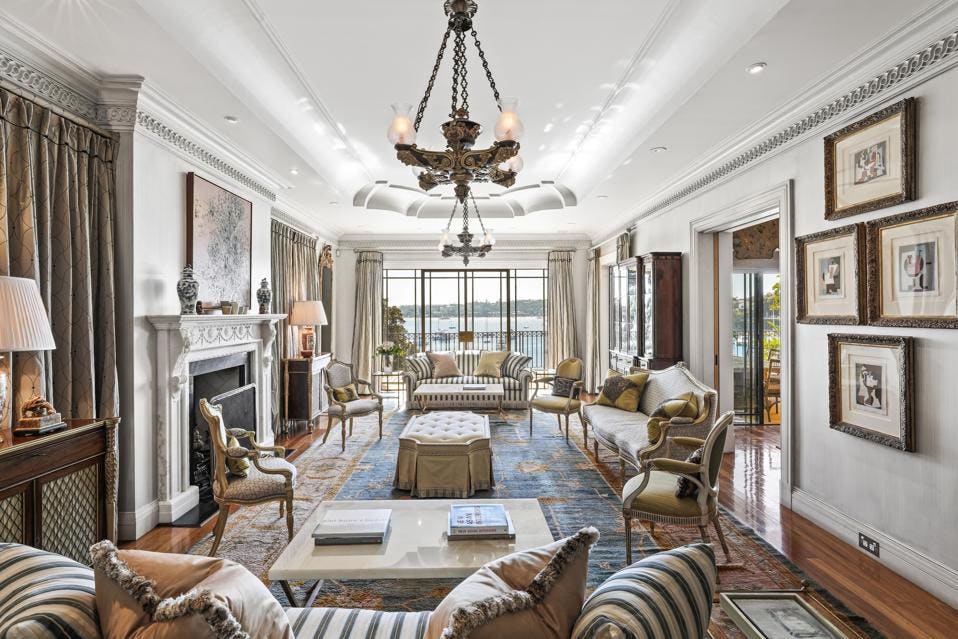 The waterfront estate on Coolong Road was designed by architect Andre Porebski. The interiors were done by Thomas Hamel (PRIVATE PROPERTY GLOBAL).

According to Jacobs, the foreign buyer market has changed. “A few years ago, we were seeing buyers coming from mainland China and Hong Kong. Now, there are more U.S. and European buyers. In addition, we have expat Australian buyers coming back.” 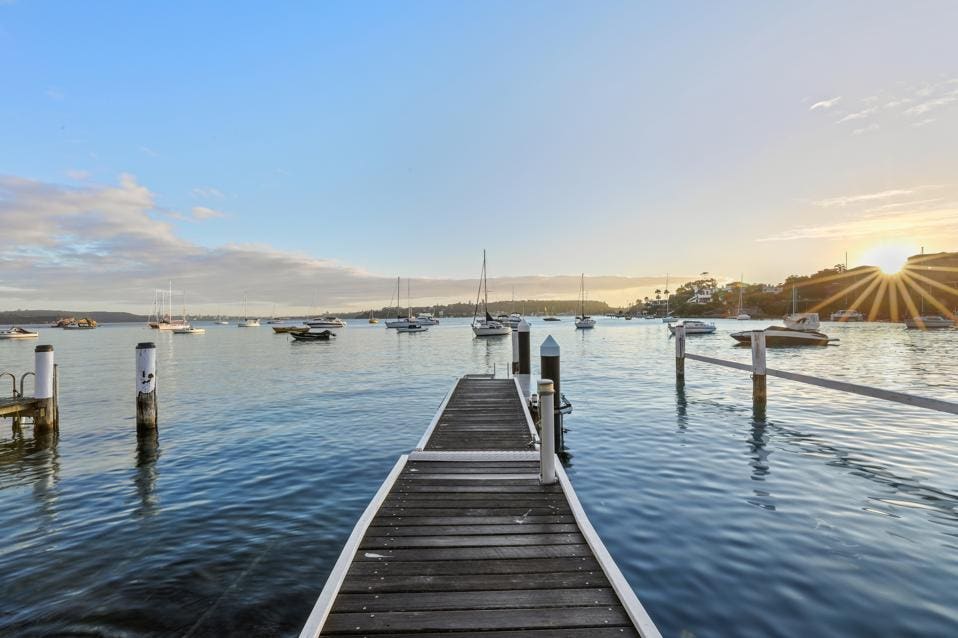 Australia’s mild climate, friendly people and cities with relatively low crime rates (Sydney is considered one of the world’s safest cities) have long attracted U.S. visitors. Expect some of those high-net-worth visitors to turn into buyers in the next year. 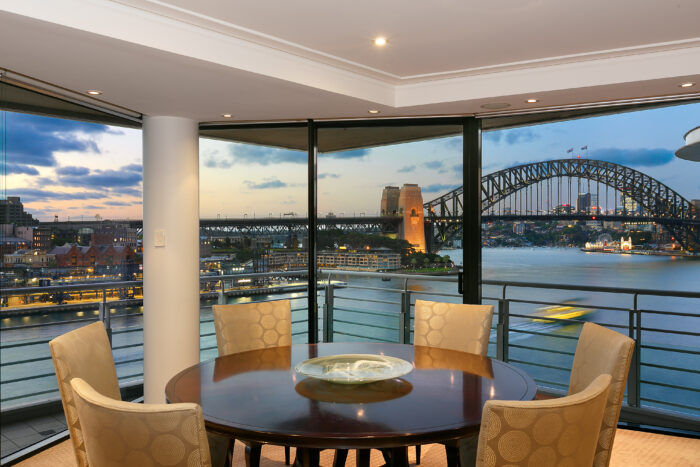 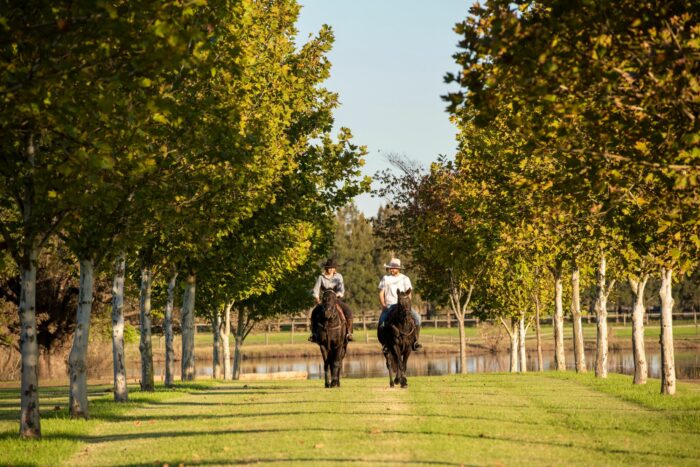