Set on close to two acres with ocean, island and mountain views, this Mediterranean mansion in a wealthy enclave of Santa Barbara, California, has several claims to fame.

It’s been the personal residence and restoration project of actress-writer-producer Kathleen McClellan, whose credits include “For Better or for Worse,” “The Bold and the Beautiful” and a stint on “Seinfeld” as Jerry’s naked girlfriend, Melissa.

The guesthouse was the backdrop for the 2019 award-winning film “Rattlesnakes,” in which she starred.

And it’s been an exemplary representative of the neighborhood – in keeping with the historic architecture and scale of storied estates in Montecito’s celebrity-popular Golden Quadrangle. 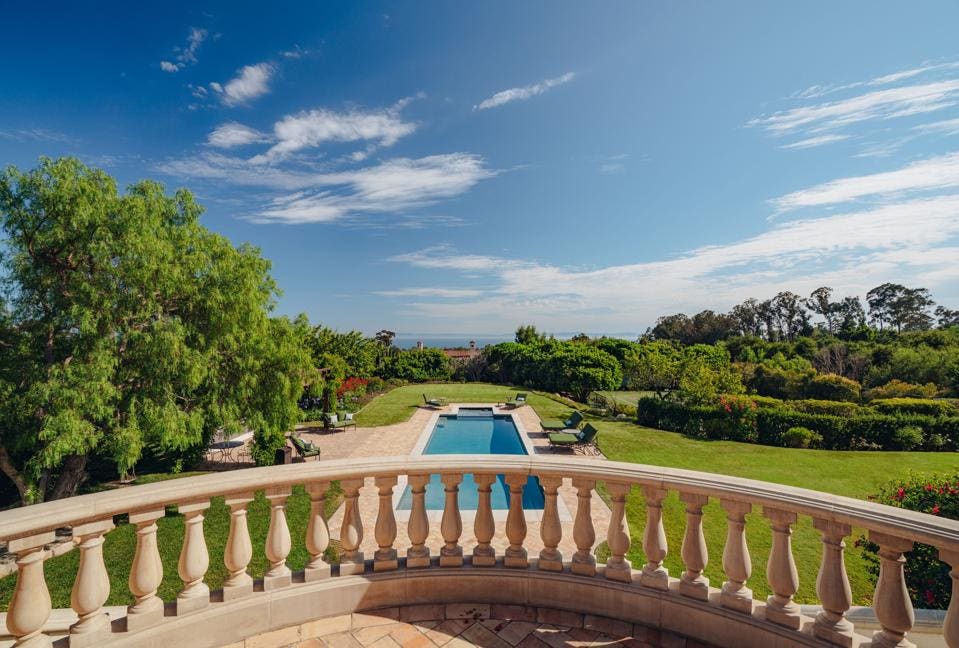 Views from the estate, in Montecito’s Golden Quadrangle, stretch to the ocean (BLAKE BRONSTAD).

McClellan, who describes herself as a “very private” person, built the home for her family to enjoy and as a place to entertain.

“Now,” she says, “I finally get to be public about it and share.” 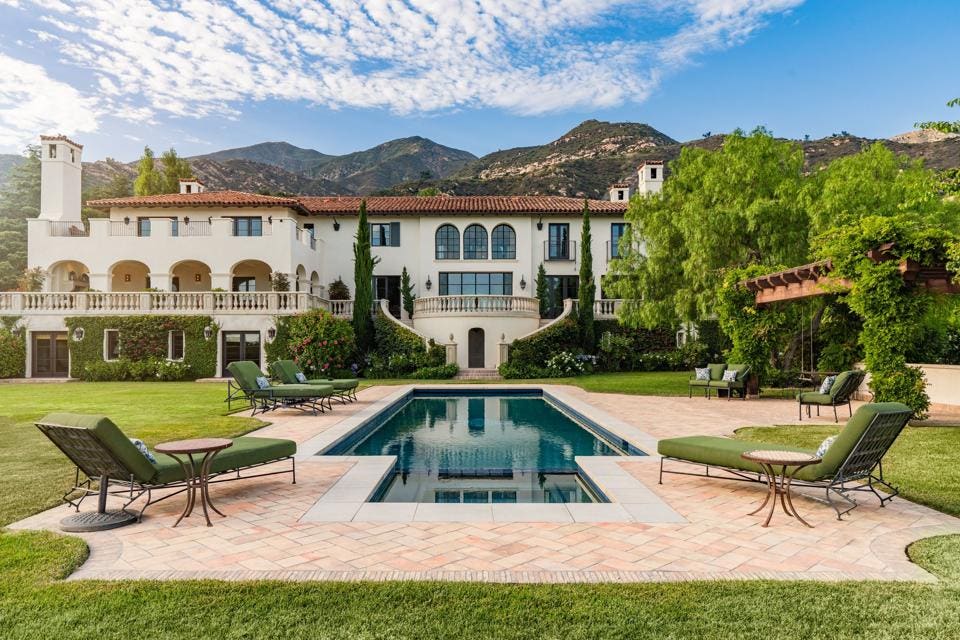 The multi-talented actress bought the property in 2011. “This house reminded me of the home I grew up in, with hints of Spanish Revival and a wraparound porch,” she says. “It felt like home.”

But McClellan soon realized that she needed to entirely redo the house.

“Being a perfectionist, I took it down to the studs,” she says. “I have tunnel vision when I get into a project.”

For McClellan, design is “almost a sixth sense.” She spent her childhood visiting houses, restoring homes, picking up materials and meeting vendors with her mother, who had a design business. “I’m like a sponge,” she says. The experience ignited a passion.

She hired architect Anthony Grumbine of Harrison Design with the goal of creating a house that looks like it grew from the ground. “I go by instinct, but I wanted to do it correctly. I would come up with my ideas and run them by him.” 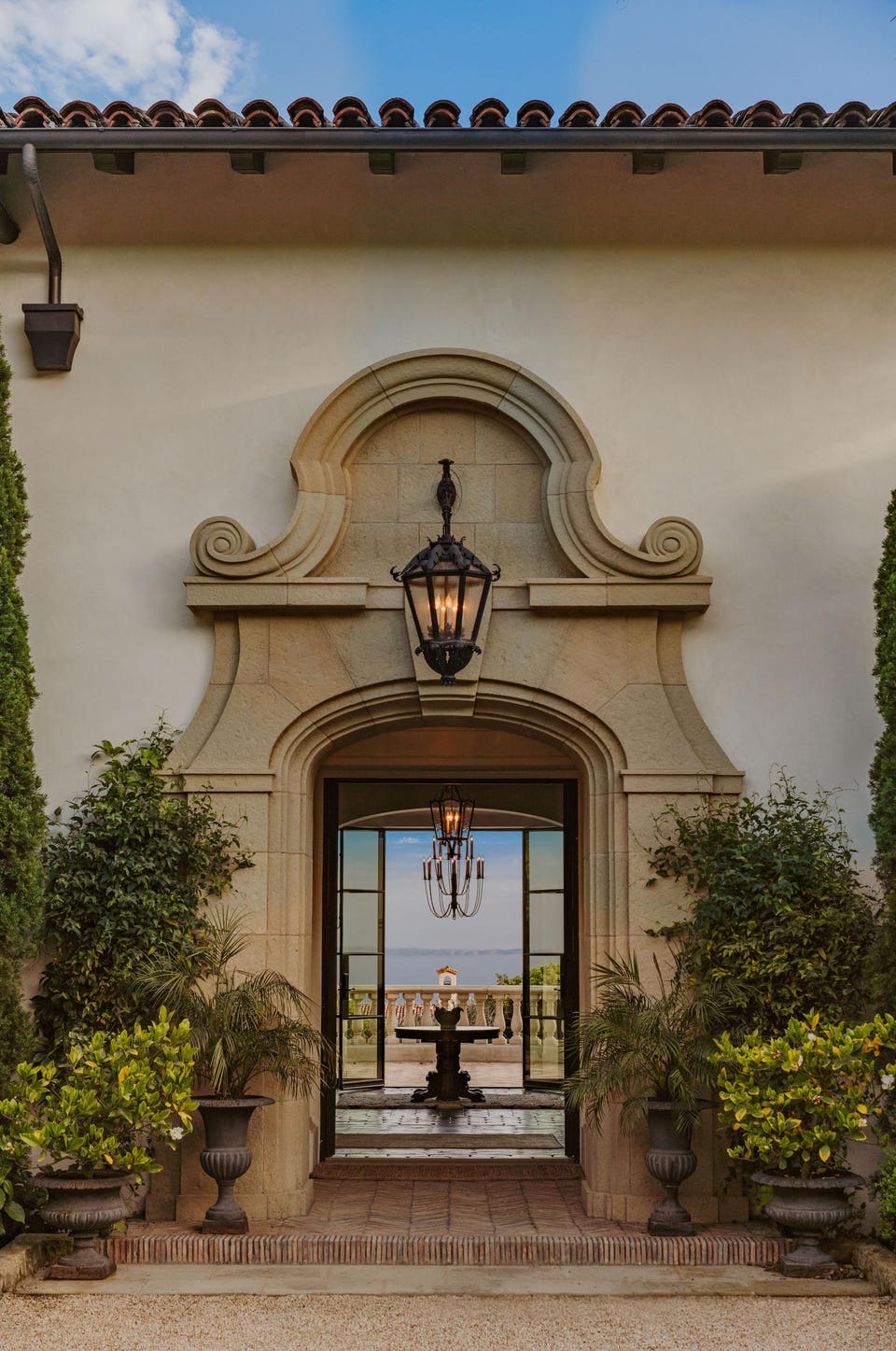 The “Rattlesnakes” star designed the front door surround, which was then carved in stone (BLAKE BRONSTAD).

She envisioned a front door surround based on that of her childhood home, and the architect brought the ornate carved-stone structure to life.

From 2012-14, she worked with Griffin & Crane General Contractors to see the project to fruition. No wall was left untouched.

For inspiration, McClellan drew on what she loves about Santa Barbara. She was influenced by the tranquil San Ysidro Ranch and nearby Lotusland. The tennis court has a rock wall that reminds her of boulders her son played on at a local beach.

A quatrefoil tile mosaic in the bottom of the swimming pool pays homage to the inhabitants of the land ages ago. “If you dive down, you can see a bear and a wolf in the mosaic.”

For the floors, the appearance she was after was old, organic, authentic. “I wanted it to look like the Santa Barbara Mission,” she says, as though the floors have been walked on. 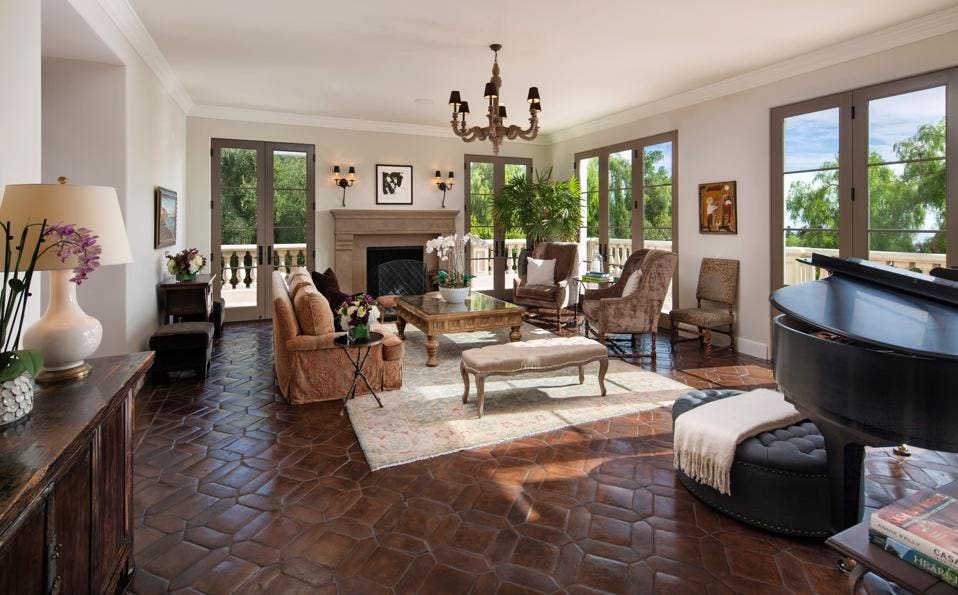 The tiles for the borders, tile carpet inlays and mosaics were made in Mexico in a process that involves drying them on the desert floor. Maybe the wind kicks up dust or animals walk over the tile, she says. “This adds character and life.”

The loggia ended up being the room where she spent the most time. She raised the ceilings and put in archways. “You can see the sunset and the sunrise from the room.”

One wall has an antique fireplace, and heaters are buried in the relief of the ceiling. The all-season, 24-hour space functions as a living room, a dining room or a spot for a pancake breakfast on a cold day. “It’s like heaven.” 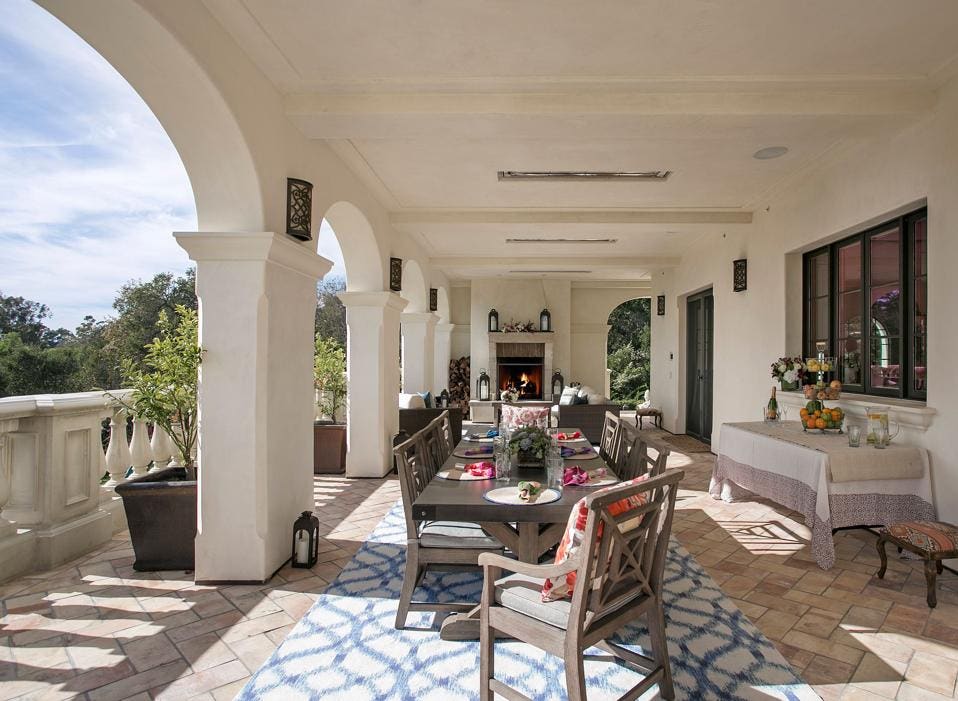 The loggia gets year-round use by family and friends (JIM BARTSCH).

McClellan says she strives for each room to have something alive, something to do and something creative.

The living room, for example, is akin to a music studio with instruments as part of the décor. “People could drop by and make music,” she says. It also served for band practice. “There’s a great creative energy in the house. The who’s who of Hollywood have stayed here.”

As for her next step, McClellan is talking to a producer about possibly doing a show on architecture and design. And she’s ready for a smaller and cozier living space. 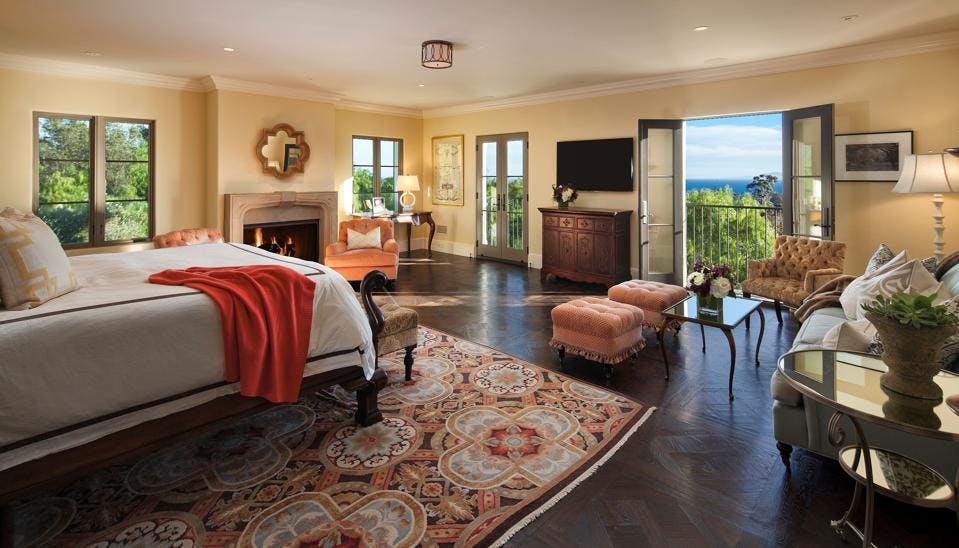 The primary bedroom features a fireplace and takes in ocean views (JIM BARTSCH).

“My mom used to say, ‘When you start to get the urge to wallpaper the garage, it’s time to move,’ ” McClellan recalls. “This house is the expression of my soul. To be able to pass it on is my joy.”

Riskin Partners Estate Group of Village Properties has the listing for the property, which contains a total of five bedrooms, six full bathrooms and three half-baths. The asking price is $19.995 million.