The largest home ever permitted in Los Angeles County—a massive Beverly Hills compound spearheaded by real estate developer Mohamed Hadid—hit the market Tuesday with an asking price of $250 million. If it sells for that price, Hadid’s compound would be the most expensive residential property ever sold in California, property records show.

Hilton & Hyland real estate agent Rodrigo Iglesias, who is listing the 38-acre trophy property, says the quarter-billion-dollar price is for the completed compound, which is permitted for nearly 80,000 square feet of total living space and expected to be completed in under 24 months. According to Iglesias, the high price reflects not only the size and scale of the property but also the cost to build an estate that would be impossible to replicate.

“This is the last of the Mohicans. There is nothing like it, and there will never be anything like it,” Iglesias says. 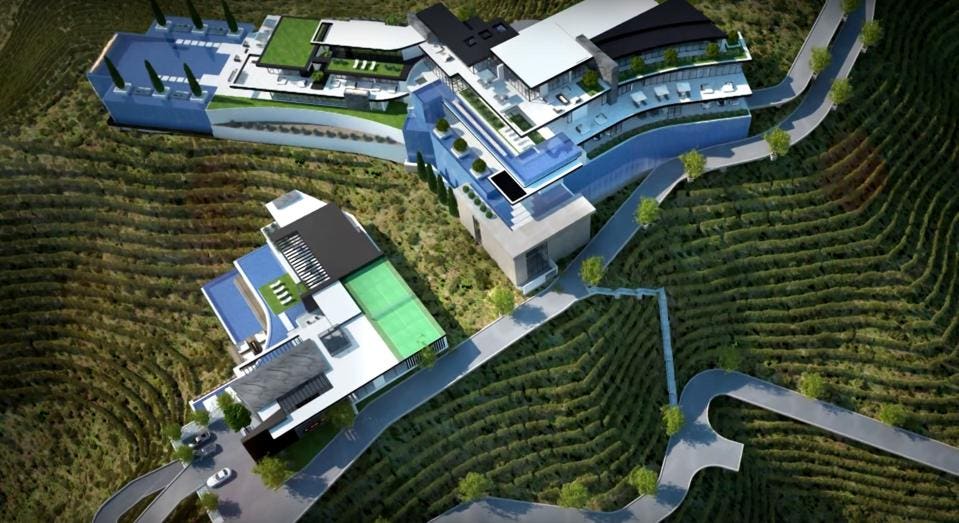 The two-house compound, which is accessed from a private cul-de-sac, is spread across five adjoining parcels totaling 38 acres (HILTON & HYLAND).

The under-construction compound will include a private street erected on 60 structural towers that will connect the hilltop property to an access point at the end of a private cul-de-sac off lower Coldwater Canyon Drive. The left portion of the estate will consist of a guest house spanning approximately 26,000 square feet, while the main house, located at the top of the hill, will measure about 52,000 square feet in size. Also included in the plans are indoor and outdoor swimming pools, multiple car galleries, a bowling lane, a theater and spa facilities.

“This unique enclave will encompass the epitome of luxury living, location, views and privacy, which are features that buyers at this level will pay a premium for,” Iglesias opines. 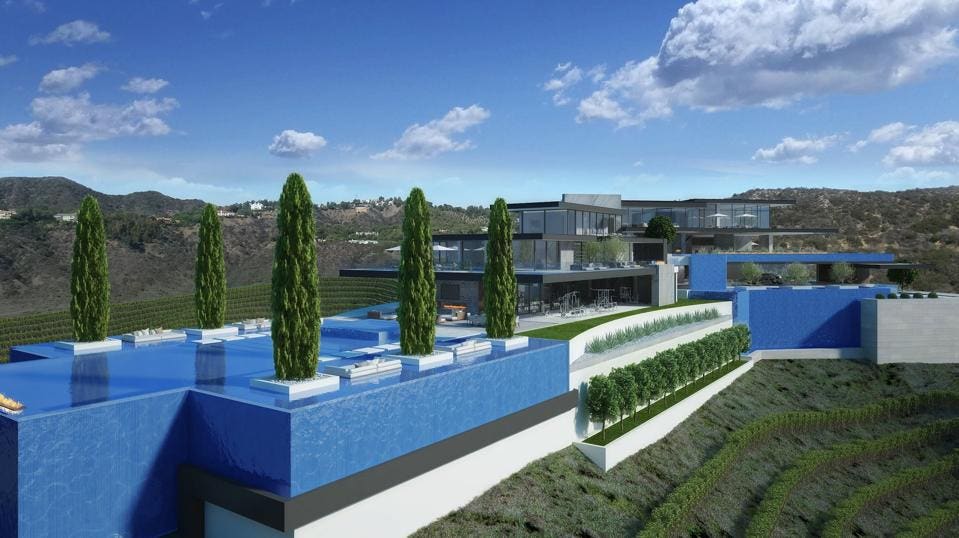 The residential development, which is fully permitted, comes with plans for indoor and outdoor swimming pools, a bowling alley, spa facilities and other amenities (HILTON & HYLAND).

Iglesias knows a thing or two when it comes to larger-than-life estates. The luxury real estate specialist previously had a hand in some of the first sales ever transacted in nearby Beverly Park, the ultra-exclusive guard-gated community where prices start in the $20-millions. When it comes to comparing the two areas, Iglesias says it’s no comparison.

“I made my career by selling four lots in Beverly Park when I first got my license, and that’s what propelled me to where I’m at in this business. [Hadid’s development] beats the crap out of all of Beverly Park,” Iglesias says.

Iglesias says the compound is separate from the underdeveloped land that Hadid is selling for $100 million and stresses that the development project is fully permitted. “This property is lower than the [roughly 70-acre] one bordering Franklin Canyon. It doesn’t obstruct anyone’s views.”

As an alternative to the $250-million asking price, Iglesias says the compound at 9650 Cedarbrook Drive in Beverly Hills could be purchased upon completion of the foundation, which is currently being poured, for $92 million. According to Iglesias, the construction manager handling the development estimated that the permitted compound will cost in excess of $135 million to build. 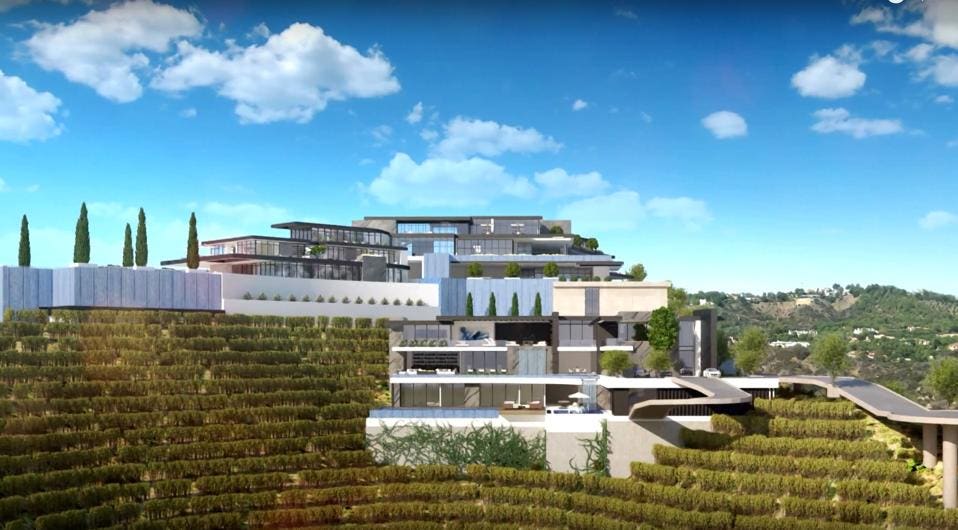 The planned main house will sit at the top of a hill, allowing for commanding views stretching from downtown Los Angeles to the ocean. The planned development is expected to cost about $130 million to build (HILTON & HYLAND).

The most expensive property ever sold in California was the so-called “Beverly Hillbillies Estate” in Bel-Air that sold in 2019 for $150 million, The Los Angeles Times reported. The seller was the estate of late media mogul A. Jerrold Perrenchio. The buyer was Lachlan Murdoch, son of media tycoon and News Corp founder Rupert Murdoch.