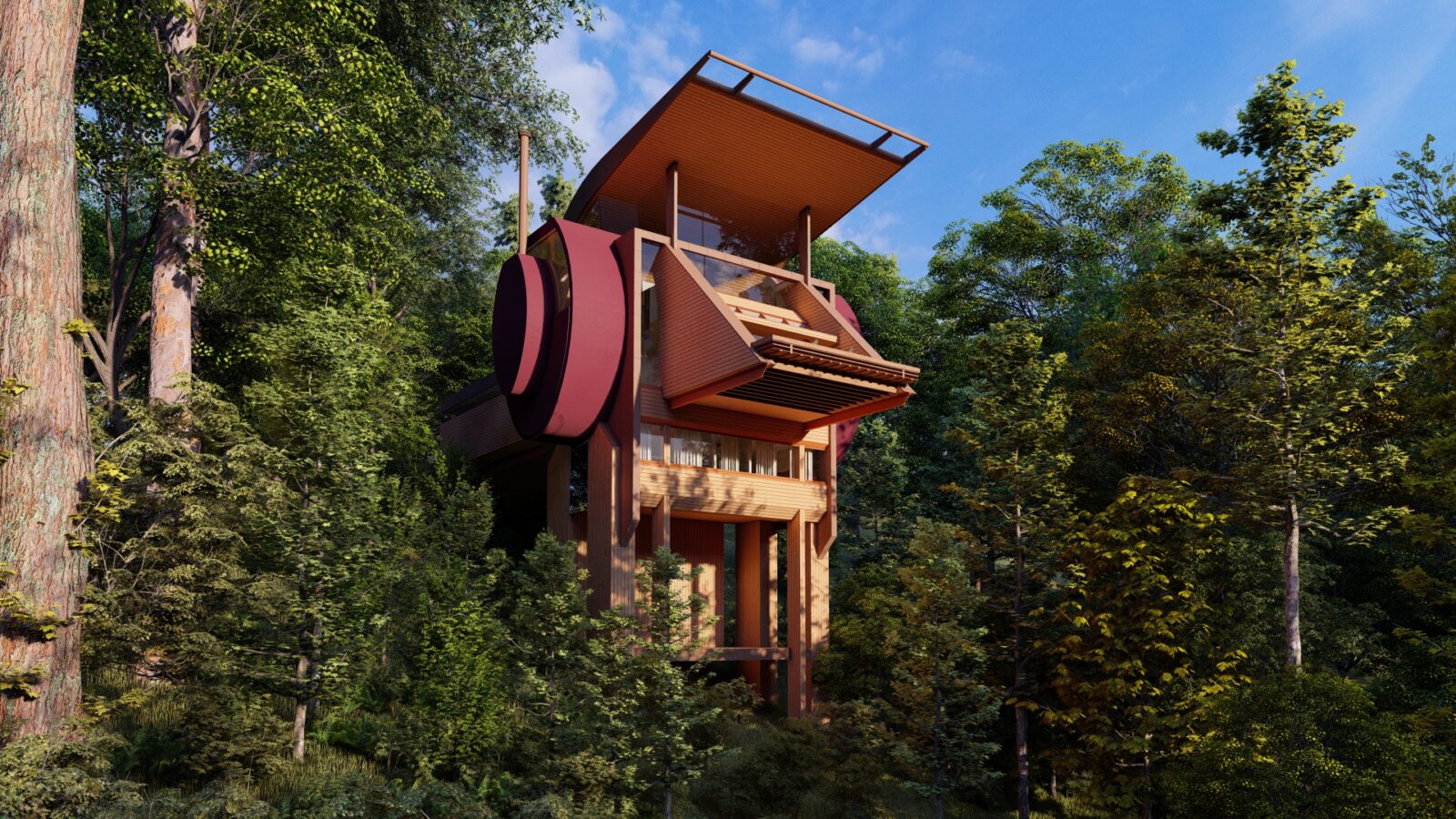 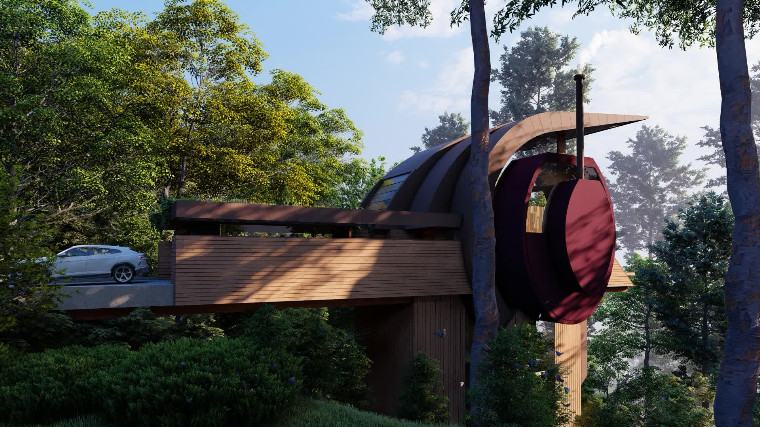 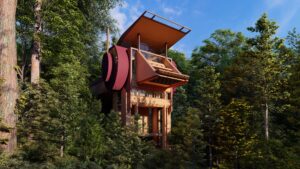 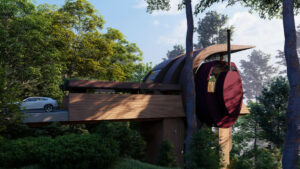 US $3,600,000
216 NW Royal Blvd
Portland, OR, USA
Status: Active
One of the most influential architects of our time is creating a legacy collection of 5 homes like nothing seen before and the first one-of-a-kind ultra-modern residence by internationally acclaimed architect Robert Oshatz will soon be complete in PDX's West Hills. Part of an ultra-limited collection, this is the culmination of a life-long vision of the Frank Lloyd Wright Jr. apprentice. Sharing 90,000 sq ft of forested acreage, these one-of-a-kind homes will inspire & excite for generations.

It is our immense honor to present Oshatz Wood, a limited collection of five architecturally wondrous homes created by one of the most influential architects of our time, Robert Oshatz. A true craftsman poised at the pinnacle of his career, Oshatz is realizing a lifelong vision of creating an exclusive enclave of sculptural residences designed to work together while retaining a high level of individual expression.

Located in the iconic West Hills area of Portland, this is a rare opportunity to own a one-of-a-kind home designed by an architect whose work is regularly a part of architecture tours but also museum and art exhibitions because of their unique viewpoint. Oshatz is a modern master, creating designs that are a synthesis of logic and emotion, somewhere between a Hollywood version of a spaceship and a geometric collage.

Since establishing his firm in 1971, Oshatz designs have been built all over the world from the Miyasaka Residence in Obihiro, Hokkaido, Japan to the Chenequa Residence in Milwaukee, Wisconsin and a large percentage of Oregon’s most epic homes. His most noted Portland projects include the Wilkinson Residence with its bold, sweeping lines camouflaged into the wooded hills surrounding the city, the Fennel Residence with its distinctive curved glue-laminated beams reflecting the ripples of the Willamette River on which it sits, the tear-shaped Gibson Boat House on Oswego Lake and his own home, the Elk Rock Residence recently featured on Architectural Digest’s YouTube channel.

Oshatz came to the world of architecture after academic struggles in high school lead him to shop class and a teacher who identified his skill as a mechanical draftsman suggested he look into the field. His first exposure to renderings was a glimpse through the window of an architect’s office he passed on the way to school. From these humble beginnings and formal education at Arizona State University, the even humbler Oshatz went to work under Frank Lloyd Wright Jr., eventually making his way to Oregon, becoming the youngest licensed architect in the state at the time. He has spent the past 50 years using his intuitive imagination to garner an international reputation for outstanding organic design. Until recently, Oshatz has flown under the radar among his more highly-promoted peers but his name and reputation are quickly growing. In an age of McMansions, Oshatz designs are joining the leagues of Kengo Kuma, Joseph Eichler, Bruce Goff and Arthur Dyson. Owning one of the Oshatz Wood residences is an opportunity to get in on the ground floor, to buy a Warhol just as The Factory was gaining notice or a Shelby Cobra in 1962.

Sharing 90,000 sq. feet of incredibly private forested acreage, Oshatz Wood is surrounded and insulated by trees. Each home will enjoy the ever-changing view from the forest floor up through the branches and above the forest canopy as you travel the floors of the structure. Oshatz excels at building vertical dwellings on land that is often viewed as unbuildable. He has a special talent for problem-solving, balancing the requirements of the land with his unique vision to create a work of art you can live in.

For the five residences in Oshatz Wood, his vision is to weave together similar materials, textures, colors and forms to create a cohesive community that is a work of art in and of itself. Everything about these homes is nontraditional, even the way the lots of this environmentally sensitive parcel were divided. Over 10 years, Oshatz determinedly worked with the city to accept his nontraditional proposal to create five ‘allowable building areas’ where the property lines themselves would be designated after the structures were designed allowing him, in his own words, the freedom to discover each site’s own sense of poetry.

Known for his groundbreaking work in organic design, Oshatz’s goal is for people to feel at peace inside the structures he designs. These five homes form a cocoon where residents will feel creatively inspired, just minutes from the vibrant, inventive and city of Portland. Known as one of the most creative cities in the word, second only to London in population of creative executives driving fashion and creativity, Portland is home to lead designers at global powerhouses Adidas, Nike, lululemon and Under Armour.

Oshatz designs also uphold his commitment to environmentalism which, from his perspective, is really just good design. The tall and narrow vertical structure of his Oshatz Wood designs was the best method for building on this hillside, requiring no excavation and no change in rainwater drainage, resulting in no erosion or landslide risk. He has extensive experience in building on this kind of geography. His design for the Elk Road Residence lot was also once considered unbuildable but Oshatz was confident in his creativity to find a solution within the complexities of the site. It is this emphasis on hyper-local conditions including unique and challenging environments, that is at the core of organic architecture. Practitioners like Frank Lloyd Wright, Bruce Goff and Oshatz explore new ways of designing; creating unique structures informed by their environment, the people and the culture that surround them.

Averaging about 3,900 sq. feet but with the potential for anywhere up to 6,000 sq. feet, the Oshatz Wood residences are fully customizable to the owner’s desires. Oshatz never wants an owner to adapt to a house but for a house to adapt to an owner and looks forward to the opportunity to work with the owners to find solutions that work for them and their way of living.  Though each light-filled home will feature access via a bridge from the street to the structure which will extend above and below the access bridge with both stairs and an elevator serving all floors, the similarities between the designs end there.  nBe the first to own a piece of this collection located in one of the most vibrant cities on the West Coast. Set amid the lush green of an ancient forest, these homes will be a tangible asset in a digital world and what’s more, they will be works of art you can live within and share with friends and family. Perfectly located in the West Hills, this community enjoys an environmentally-protected view that will not change or be developed. This location is a 30-minute drive from Portland International Airport, 12 minutes to downtown Portland and 13 minutes to Nike World Headquarters in Beaverton. 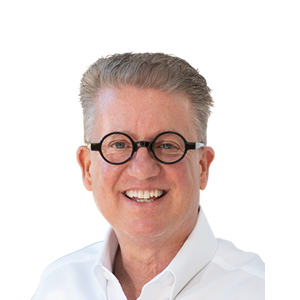 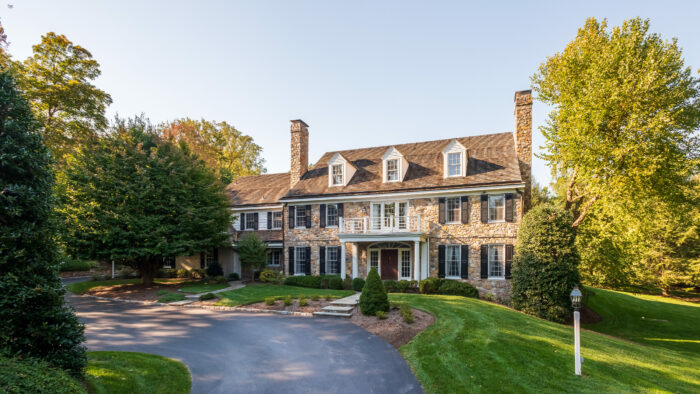 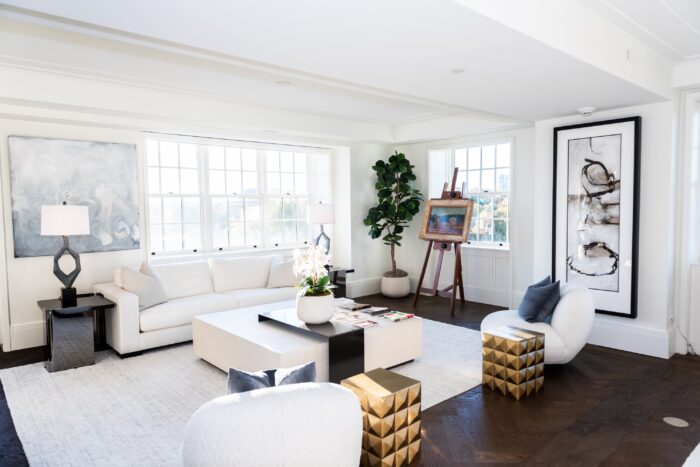