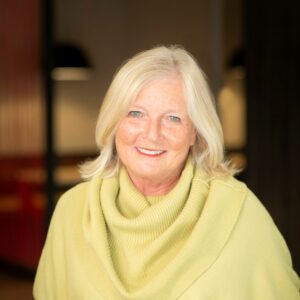 Jeannie began selling real estate in the Vail Valley in 1987, primarily at Homestead, a residential development in Edwards. She worked with the developer in sales and pre-sales of lots, single family and multi-family residences, until opening her own brokerage in 1989.

Since joining Slifer Smith & Frampton in 2005, Jeannie has been accommodating Buyers and Sellers out of our flagship, Bridge Street office here in Vail.

Prior to selling real estate, Jeannie came to Vail (in 1976) as Sales and Marketing Director for one of Vail’s original conference hotels. She and her husband then opened and managed the Homestead Court Club in Edwards, managed the homeowners association (1985-2004), and raised two daughters in the world of tennis, hiking and mountain activities.

A native of Wilmette, Illinois, Jeannie earned a B.A. from Newton College of the Sacred Heart in Newton, Massachusetts. Having lived in The Vail Valley for over 40 years, she has an extensive insight into Vail, its history, and its residents – longtime locals and second homeowners alike.